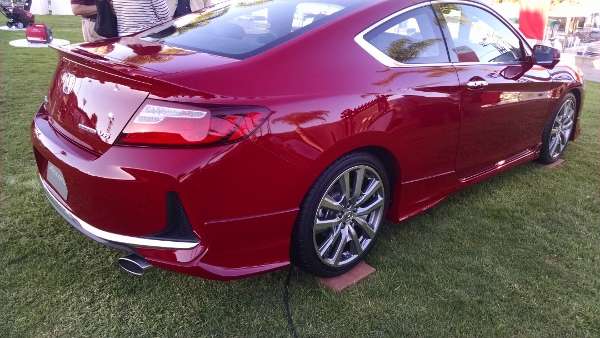 With 2016 Honda Civic slated for U.S. dealer delivery sometime in late Oct, early November 2015, Civic fans are looking for a bit of news as to what performance and options they may find in Honda’s most advanced Civic produced to date. We look to 2016 Accord for an answer or two.
Advertisement

When the 2014 refresh of the 9th generation Honda Civic hit the streets in late October, 2014, the rather edgy, toothy looking Civic created quite a stir in Honda owner forums world wide, pushing U.S. Honda Civic sales to a 10 year high. Sales momentum has fallen off a bit in the U.S. as consumers transition into the sub compact crossover. No worries, Accord and Honda remain the best selling cars in Honda's lineup with major upgrades online for 2016.

Apparently, the 9th generation Civic released to markets April, 20, 2011 as a 2012 model, was widely panned by automotive journalist; as a love-hate relationship between Civic and the auto buying public ensued. This resulted in lost sales for what was historically Honda’s ‘bread and butter’ car in North America.

2014 signaled a major styling refresh and interior upgrade as found in the retiring 2014-2015 Civic we drive on the road today.

Honda-Torque News appreciates personal connectivity, and active safety innovation as much as the next Honda enthusiast. But frankly, for us, connectivity and active safety features fall 3rd and 4th on our list of considerations when weighing the positive attributes of a new car purchase candidate.

#1 on our want list is road handling and engine performance. We’ve grouped these two together, because frankly, one without the other is a very limited drive and ride experience. #2 on our list is interior comfort and ergonomics. Honda jumped light years ahead of much of the compact class competition in 2014, with the release of the much improved Honda Civic. We’d still like to see a power adjustable driver’s seat with lumbar support offered throughout the lineup. Perhaps that’s an option coming down the pike in 2016, we’ll see. #3 on our list is base MSRP and fuel efficiency.

Honda does both very well, and looking to the model year price increase pattern as indicated by the release of the 2016 Honda Accord, due in dealership showrooms August 19, we predict that 2016 Honda Civic Sedan will come to market within the price of a week’s worth of groceries over its predecessor, + or - $180 or so. *Estimated base model MSRP $18,500. Will 2016 Honda Civic be better than the present offering, or simply different?

And, will do so while holding the entry-level MSRP within a fist full of dollars of last years Civic. With the reintroduction of the Civic Hatchback to North America will come the most tech-advanced and powerful base-Civic in Honda history. Honda has further promised an Si coupe and sedan with anticipated horsepower exceeding 220+. The first offering to reach the showroom in November 2015 will be the Civic Sedan in several trim variants, followed by the coupe and then the hatchback sometime in early 2016. Yes we know, Honda promised a Type-R hatchback for North America. However, as reported earlier by Honda-Torque News, the North American Type-R will not be based on the current Type-R being welcomed by enthusiast in Europe. Our version will be built on the Honda compact world platform, manufactured in Swindon, U.K., and powered by a turbo engine built in the U.S., specifications yet to be disclosed.

It’s those little comments you collect while sharing an a-ha moment with engineers at a Honda event. The production Civic will look much like the present concept as featured in this article. The trademark headlamp and digital tail light assembly will remain. We won’t see the exaggerated rear wing, center exiting custom exhaust, or blade mirrors, as displayed on Mean-Green, make it into production. With Civic remaining the compact sibling to 2016 Accord, it will be interesting to see where Honda draws the line between the two offerings as to standard value and performance. Look for our initial drive review of 2016 Honda Civic sedan the last week in October 2015.