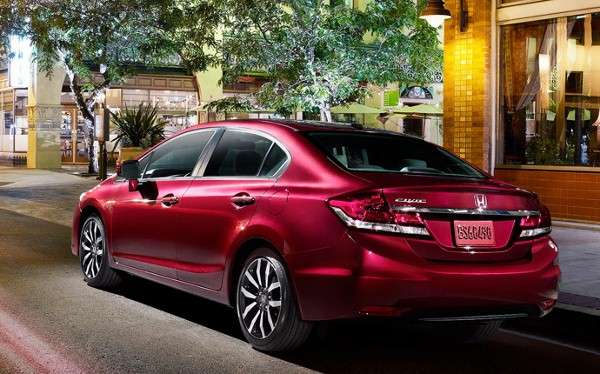 Honda is right on the money as a controversial front end redesign pushes 2014 Civic sales into the record books. Torque News asks the question: What do you think of Honda's redesigned Civic?
Advertisement

In a recent US News Best Cars Ranking, automotive journalist rated Civic # 3 out of 40 cars reviewed. Honda Fit and Mazda 3 edged out Civic for the top spots. Initially we found the 2014 redesign to be a bit edgier than neccesary; the Civic nose design to be very color sencitive, we didn't like it.

But as they say, the public has spoken. In review, Torque News believes that Civic's success is tied to its edgy good looks, loaded base-price accessories and tech-rich, easily interfaced personal communication and entertainment connectivity.

While that last sentence was a run-on bordering on a standalone paragraph, we find it tough to capture all that is a -party-to the 2014 Civic success story. We’ve had the pleasure of driving the much improved 2014 Civic in all trim levels. While it’s not a Honda Accord or the European Civic Type R, we do believe the North American Civic to be a relative bargain when taking the following contingencies and conditions into account.

American Honda Motors and the North American auto industry experienced a mild retraction of sales to date for 2014; June was not the exception. As noted by Torque News, Honda sales for the year were down 0.8% with a 5.8% downtrend recorded for the month. While early and late spring weather in much of North America remained on the cold side, many North Americans found themselves returning to work in June after a very weather- tough extended winter.

However, the federal Jobs report released in the first week of July indicates a continued and sustainable economic recovery as we come into summer 2014. This news should be good for Honda.

O.K., with that said, don’t cry for Honda, they’ll be just fine. While Civic, Accord and CR-V continue to be best sellers in Honda’s North American lineup, it’s Civic that underscores what Honda is for many North Americans. Built in the U.S. and Canada since 1983, Civic is as American as your great grandmother’s Ford LTD. An estimated 30 million Civics in multiple variants have hit the road running in North America. It’s not unusual to find 3 generations of a Honda family driving Civic.

Base Price: A reasonably equipped Civic LX has a “ beginning msrp” of $18390 + cost of sale. What you get for the $ spent is a decent handling, good looking 4 door sedan. I’m not in the business of selling Honda, but, what we like about Civic is this; So will you.

According to Kelley Blue Book, the 2014 Civic is estimated to have the highest residual value of any vehicle in its segment. KBB tells us that after 6 years of ownership, one can expect a residual return of 50-60% of original purchase price at time of trade-in or resale.

Mazda 3 can’t touch this: Honda’s mechanically bullet-proof 1.8 liter, 16 valve, SOHC 4 cylinder i-VTEC is tuned to produce 143 hp @ 6500 rpms, with a very usable 129 lb-ft torque available in the midrange. Working in tandem with a 5 speed manual or CVT transmission, Civic sips gasoline( mpg) at the affordable rate of 30 city/ 39 hwy. For 2014, handling as well as interior sound deadening has been measurable improved.

Critics like the improved plastics and soft materials placed generously throughout the interior. Seating and ergonomics are noticeably improved for 2014. So is the exterior body styling and trim. Civic is very "grown up" for 2014 and compliments Honda's line with a new uptick entry level quality sedan and coupe.

While we expect the 2015 Fit to give Civic a run for the money, those wishing for a conventional sedan or S coupe will find Civic to be surprisingly refined and drive-worthy for your dollar spent.

The list grows shorter every year, for 2014, Honda has held the base price while adding value to the Civic LX. With considerable competition in the compact class, one would be hard pressed to find a greater long-term value in a reliable, good looking compact sedan.

However, we do find it to be a bit redundant that Honda has opted to retain the mechanically adjusted driver’s seat in the 2014 Civic. Also, we would like a slightly softer suspension setting, quieter tire tread and a hatchback option. That's it...

CivicMaker wrote on July 8, 2014 - 7:29pm Permalink
The Civic is no longer made in OHIO, Honda Manufacturing of Indiana,(HMIN) and Honda Manufacturing of Canada, (HMC) produce the Civic's that American Honda sells today.
Parks McCants wrote on July 8, 2014 - 7:54pm Permalink
Thank you CivicMaker. Most appreciated.
Mike wrote on July 9, 2014 - 10:26pm Permalink
The rims for the 2014 are a marked improvement (on EX-L trim levels), as is the extended view side mirror, blind spot camera, and push button start. However, many of the improvements mentioned happened during the 2013 "emergency refresh", not 2014. The higher quality materials (the interior is one of the most nicely appointed compact cars on the market), the increased soundproofing, and thicker windshield/front windows make a profound difference. I owned a 2012 Si and I couldn't wait to get rid of it. The interior road noise was utterly unbearable, the interior materials were hard, brittle plastic, the headliner was a cheap cardboard-like felt, and the handling/steering feel was absolutely horrid. I will never understand what Honda was thinking with the design and interior of the 2012 Civic. They've admit in interviews that they knew the car wasn't competitive before it even went on sale, and begin preparations for emergency refreshes before they even hit the lots - that's absolutely deplorable. Updating the handling for 2013, as well as the front and back of the sedan, did wonders for the car. I have a 2013 Si sedan in Dyno Blue and I like how the front end looks (though my 2006 Si design is timeless). I personally think the 2012+ model Civics were a bit of a step back design wise - like they blended the best of the last gen Civic with the worst of the Corolla. That said, the car continues to get better in most regards. The two exceptions being the inability to get XM on any trim level unless you purchase the overpriced, outdated navigation unit (the option to buy the $300 XM accessory from Honda went away with 2014) as well as the "touch screen". I had a 2014 LX sedan as a rental and absolutely despised the mandatory touch screen radio. It is redundant with much of the information displayed in the i-MID mini display near the speedometer, and the lack of a volume knob is absolutely painful.
Parks McCants wrote on July 10, 2014 - 1:40pm Permalink
Good day Mike. Thank you for the detailed account of your experience with Honda Civic. I agree with you, the fit and finish of the 2012 Civic is a bit substandard. While Honda continues to evolve its electronic connectivity, I recomend you take a look at the latest Crutchfield Electronics offerings. Aftermarket may be the answer for you as to XM, navigation, etc. Send me a photo of your 2013; Love to see it.