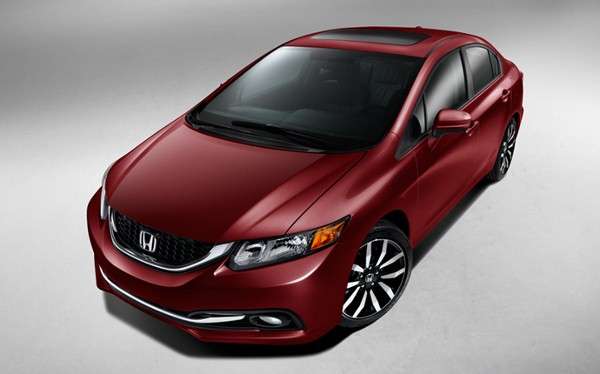 As announced Monday by American Honda Motors, despite an industry-wide slump in new car sales for the shortest June in 5 years, Honda’s core models, Accord, Civic and CR-V continue to come off of the sales floor in record numbers.

We’ve reported on North America’s best selling midsize sedan and coupe in great length and love the car for its tech-rich, value packed base model. We received an email this morning from an owner of a 2014 Accord Hybrid. He’s claiming real-world fuel efficiency approaching 55 mpg. Positive ratings from consumers will continue to drive record Accord sales to new record highs.

Tough enough for the dirt, classy enough for a night on the town, the CR-V continues to draw new buyers while retaining the highest residual(resale) value of any SUV or crossover in the class.

What about the 2014 Civic? To be honest with you, we’re not taken by the nose design of the car. We find it to be color sensitive and unnecessarily aggressive. However(and you may quote me on this) in the right color the car catches the eye and the lines work. We like the handling characteristics of the Civic Si, appreciate the accommodations afforded both driver and passenger in the 4 door EX and EX-L. Sporting ample headroom, leg and shoulder room while carrying four adults and luggage, the Honda Civic offers a surprisingly refined and comfortable car for your dollar spent.

*Starting at $18390 plus applicable sales costs, the Ford LTD of this millenium has a cross-generational appeal. Honda’s been manufacturing Civic in North America since 1983; they’re as American as mom and apple pie. With the highest residual(resale) value of any used compact car in North America, Civic will put 50 to 60% of the original purchase cost back in your wallet after 5 years of ownership.

To date American Honda Motors has sold 739,436 for the first half of 2014. As the uptrend continues, Civic records its best 6 month sales momentum in a decade with the Acura Division bringing up the rear with record light truck sales.

We truly appreciate and enjoy the 2014 MDX, so does North America. Year to date MDX SUV sales are up 68.4%. We’ll touch on Acura’s renaissance here.