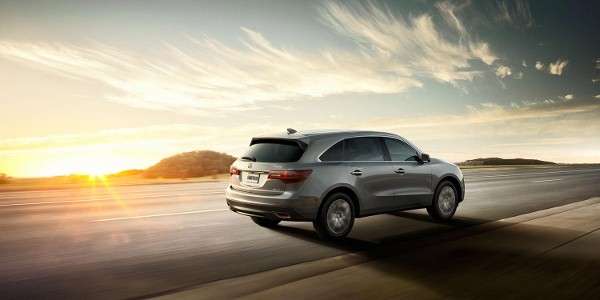 If paper plates are an economic indicator, the Acura MDX is the bellwether Blue Chip stock of Acura’s lineup. Torque News takes a closer look at the driving force behind the Acura renaissance.
Advertisement

For June 2014 American Honda Motor’s best selling premium SUV continued to drive the Acura division to profitability. With sales up 27.7 % for June and 68.4 % for the year, MDX continues to bolster the line as North America awaits the arrival of the next best-selling premium luxury midsize hybrid sedan.

As our friend Mike Accavitti states, “The Acura brand is moving in a strong direction.” With 2012 and 2013 units remaining on dealership lots across North America, this is good news. We recently penned a story on the redesigned 2015 ILX compact released to dealerships early in June, only to discover that the release has been postponed to August for the Pacific Northwest.

Speaking with Acura, we discover that our media test drive of the all new 3 motor TLX Hybrid will most likely occur in late July; we look forward to it. Walking the new car sales lot of Kendall Acura Eugene, Or., while we find no shortage of MDX and RDX SUV’s, the used car inventory is dominating the Acura side of the business, with missing new car offerings quite evident.

Corporate’s aware of this fact: “ While we expected the reduced supply of sedans to impact sales this summer,the upcoming launch of the all-new 2015 TLX lineup heralds a new era for the Acura brand,” says Mike Accavitti, Acura division senior vice president and general manager.

Back to the MDX: With a base suggested retail price of $42,565, Chevrolet and Toyota can’t touch the MDX for fit and finish, base model accoutrements and tech-rich driver environment. With the same wheelbase as a 2014 Honda Accord Hybrid, the 4332 lb 290 horsepower MDX offers car-like road manners in a refined 7 passenger SUV of uncompromised safety and quiet.

It sells well because it’s the best overall purchase value in its segment and according to KBB, is estimated to retain the highest residue value in its class. Great driving manors, good looking and wearing the Acura brand, the MDX is destined to be the best selling premium SUV in North America for 2014.