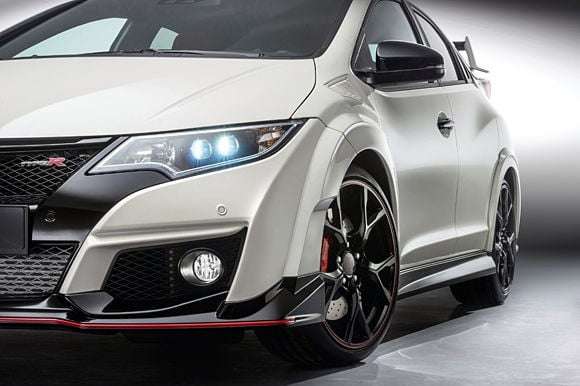 Breaking News: Civic Type R destined for United States not based on Euro-Spec

What you see is not always what you get in the world of automotive performance. Such is the case with the much sought after high performance Civic Type R.
Advertisement

According to our Honda sources: The Euro-Spec Civic Type R performance Hot-Hatch being released to the European market in early Summer 2015, is not the same vehicle platform destined for North America.

Although manufactured and imported from the UK, the EPA safety compliant North American Type R will share platforms with the designed and built in Canada 2016 Civic Concept “World-Car” platform, as revealed to the automotive press at NYIAS on Wednesday.

This announcement raises an interesting question as to driveline specifications, engine horsepower, torque and speed-performance specifications. Throw out what you’ve read of the European-Spec Civic Type R. Apples to oranges, the mechanical and performance specs won’t apply to North American applications.

What we do know is that North American Civic buyers will be afforded the choice of 3 body designs, including the first 5 door Civic hatchback variant to arrive on our shores in the history of Honda. This raises an interesting question or two as to the direction of Honda street performance.

While 2016(or 2017) Civic Type R when released, will be Honda’s most advanced front-wheel-drive hot-hatch to date. Waiting on shore to meet Type R is Ford, Subaru and Volkswagen; all hot-hatch contenders with a measurable difference, they’re all-wheel-drive.

2015 is “The Year of Honda,” and arguably Honda and Acura Division is shaking up the automotive world with an unprecedented revamping of it’s entire car and light truck lineup. As announced Wednesday by Honda’s John Mendel, Honda’s North American lineup has been completely upgraded, updated and re-powered over the past 24 months. Torque News finds the forward momentum of Honda Motors evolution to be unprecedented in this millenium and merits recognition and applause.

2016 Civic Type R for North America, designed in the U.S., built for the world

Here’s the thing: With the unveiling of what is arguable the most visually stunning Civic Concept destined for North America in a decade, Mendel teased the auto press “Let’s do it,” with a hint as to the “possible” import of the U.K. manufactured Civic Type R. Turns out that that’s just a very small piece to the puzzle.

FWD Vs AWD, and the winner is…

For us, the performance drivetrain choice remains a mystery: Why Honda choses not to specify SH-AWD, P-AWS or AWD in a North American performance hatchback or Civic Si-like sedan is beyond us.

In a performance segment dominated by all-wheel drive, low center of gravity and WRX drift masters, Honda sticks to its sport-modified front-wheel drive performance lineup. Granted, Honda engineering has measurably reduced torque-steer through chassis engineering in all performance offerings. However, it’s still there and quite evident in this car.

Honda competitive drivers work around torque-steer on the track every weekend. In driving Acura’s TLX, we discovered, they shouldn’t have to.

When the U.S. designed “World-Car” platformed, built in the UK Civic Type R reaches North American shores, it will be greeted by the all-wheel-drive Ford Focus RS, Subaru WRX-STI and the Volkswagen Golf R; All serious contenders in the under $50,000 hot-hatch performance title; some, way under.

The North American 2016 Honda Civic Type R will(possibly)be the highest priced Honda car in the lineup. Granted, it’s as close as one will come to an out of the box race-spec Honda Civic. looking to the Euro-Spec 2015 Honda Civic Type-R, we discover a 340+ horsepower turbocharged 2.0 liter i-VTEC, with race track harshness and true British spirit sports car enthusiasm.

North American buyers most likely won’t see Euro-Type R performance due to EPA, emissions, safety mandates and crash test viability. However, it should be close.

Don’t cry for Honda, they know what they're up against

With the 2.3 L EcoBoost powered 315 horsepower all-wheel-drive Ford Focus R “World-Car” positioned for U.S. import in 2016, Type R will have some measurable competition in place prior to its release date, sometime in 2016. Add to the growing field of all-wheel-drive, tech-rich, high performance Euro and Asian-Hot-Hatch based competition, the much anticipated next generation Subaru WRX-STI Hatchback and the highly anticipated, Volkswagen Golf 400 R.

Honda may encounter a bit of an uphill battle when entering the relatively low volume specialty sales market of high-end-performance pocket rockets. It’s going to come down to pricing and standard featured performance. But then again, Civic Type R, while not based on the 2015 Euro-Spec edition, will be the hottest Honda-Hatch available to North American Civic enthusiasts, 10 million strong and growing. At any measure, exciting news for Honda aficionados.