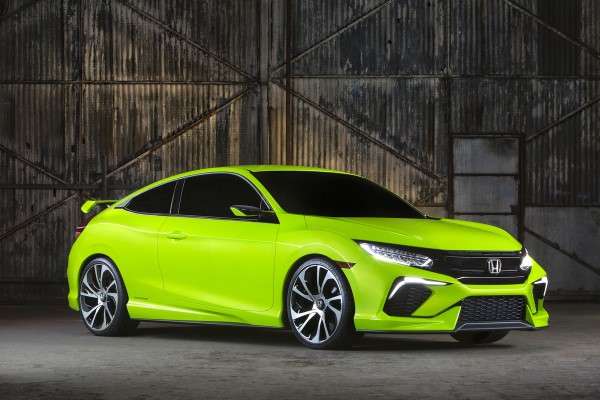 2016 Honda Civic Concept is visually stunning and turbocharged! This designed and built in North America "World Car" offers enough cutting edge performance and tech-driven personal connectivity and active safety features to give the competition a run for the money. We're collectively blown away!
Advertisement

Watching Honda’s John Mendel present what will undoubtedly be a sales winner for American Honda Motors was but a small part of the spectacle that is “The Year of Honda.” Unveiling Wednesday in New York, what is arguably the most dramatic looking pre-production Civic Coupe Concept in a decade, was just the beginning of a string of announcements that will shake up the auto industry; as well as Honda Civic owners and metric “tuner” fans looking to the next “big thing” in Civic development.

But that’s just a very small part of the story that is “The year of Honda.” Designed and built in North America, 2016 Civic just raised the bar for design and performance in what was previously the automotive compact economy class. This up-sized performance Civic takes Honda in a bold new direction.

10 million strong and 9 generations deep, 2016 Civic will dominate the segment

Honda tells us that the sedan iteration of the 2016 Civic will be available for North American markets in the fall; with the coupe and the European imported 5 door hatchback following in early 2016.

While Honda has not shared specifications, according to Mr. Mendel, a 1.5 liter North American built EarthDreams ™ turbocharged VTEC will be opted in higher trims with a DOHC direct injected VTEC engine standard. A close ratio 6 speed MT and “G” patterned CVT will transfer torque to the pavement through a limited slip, FWD differential.

According to John Mendel: Honda’s listened to Civic owners, race enthusiasts and the automotive press corp. John agrees! It’s time to import a Type-R to North America. Honda will follow up with details later in the year as news develops.

Looking to the Honda Stage, Torque News believes that if Honda’s 2016 Civic Coupe Concept is any indication of the design direction of the production car, 2016 Civic will dominate the compact segment with exceptional automotive design and performance attitude.