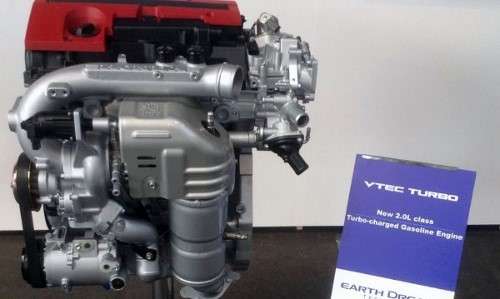 Honda announced Tuesday in Detroit that a built in Ohio turbocharged 4 cylinder VTEC engine is in the works. Does this signal a Civic Type R for North America?
Advertisement

According to Honda: The Anna,Ohio plant will add a third production line dedicated to the assembly of the Earthdreams ™ turbocharged 4 cylinder i-VTEC gasoline engine; the first to be produced by Honda in North America. Honda has not disclosed the liter specifications of the engine or the intended application.

However, looking to the lineup and Honda’s soon to be released HR-V, we see the possibility of a sport version in the making for HR-V, utilizing a small displacement turbocharged gasoline engine. We also predict a small displacement (2.0 liter) gasoline, 2 motor hybrid coming to Pilot and Ridgeline late in 2015.

Our reasoning: Turbocharging and hybrid electric technology is a cost effective method of increasing fuel efficiency and reducing emissions while increasing combined horsepower and exceptional torque. We look to the CR-Z,Accord Hybrid and Acura RLX as working examples; we’ll see where this goes.

As to the return of a Civic Si or Type R hatchback to North America? When looking to Honda’s current and near-future model lineup we don’t see that happening. As demonstrated at the 2014 SEMA Show, Honda Fit is positioned to be the next “hot-hatch” for North America.

With the announced late spring, early summer release of the Honda Fit platformed HR-V sport crossover, the handwritings on the wall. HR-V crossover will be the next Honda sub-compact hot-hatchback. But then again, that’s just our opinion.

In 2014, our readers in Asia and Europe shared with us tales of exceptional fuel economy and high performance attributed to Honda EarthDreams ™ engine and transmission technology.
We’ve driven 2015 CR-V and Honda Fit equipped with direct injected, multiple stage inducted i-VTEC engines,finding both cars to be surprisingly sporty despite small, normally aspirated displacements.

Although we most likely won’t see clean diesel technology as utilized in this 70 mpg Honda, we predict that EarthDreams ™ turbocharged 4 cylinder gasoline engines will record 30+ mpg ratings in Honda, Acura light trucks, and 40+ mpg in Accord and Civic gasoline only variants, while increasing performance.

EarthDreams ™ engine technology provides exceptional acceleration and torque throughout the rpm range. We look forward to what Honda refers to as “ Fun-to-drive performance,” as afforded through turbocharging

Robert wrote on January 13, 2015 - 8:35pm Permalink
Back when Honda confirmed they would be moving to turbo charged engines, they said "1.5 is the new 1.8." They also touted the 1.5t would provide 15% better fuel economy and 45% better low end torque. If Honda can deliver on that claim, the 1.5 would be the logical choice as they would probably start to drop in in every Civic, HRV, and possibly the 4 cylinder Accord. I'd imagine the 2.0 is slated for a later release since the 1.5 is likely to take the lion's share of volume over the next few years without a Ridgeline release date on the horizon.
Parks McCants wrote on January 14, 2015 - 6:22pm Permalink
Welcome Robert. if Asia and Europe applications are a preview as to Honda's intended application for North America, I believe you to be dead on. We do find a 1.8 liter C.D.I. across the pond. With Audi, V.W .and others turning to clean diesel technology, more than a few Honda fans are calling for an EarthDreams clean diesel option for light truck application in the Canada and the U.S..
Robert wrote on January 15, 2015 - 1:01pm Permalink
Do you think we will get a Honda diesel? My gut says no, but since Honda's admitted to closely watching the 3 cylinder Fiesta, I would guess the incoming Colorado diesel and potential Frontier diesel would also garner the same attention if they aren't already trying to decipher the Ram eco-diesel numbers. The new Ridgeline is still 2 years out? Could that imply a diesel option? I still. Think no with the 2.0t promising upto 280 hp. Given the reception the Hyundai "pickup" received this week in Detroit, I think Honda knows the only thing the Ridgeline needs is a butched up look, a refined interior, and respectable MPG. They won't need a stateside diesel for that. Hell, I'm a loyal Tacoma owner, and I'm waiting to see if the new Ridgeline delivers. Ford's already in the process of updating their 2.0 and promising better than 240 hp and 270 lb-ft. If the 2.7 can move the F150, surely a superior Honda engine would be good enough for light truck duty.
Parks McCants wrote on January 15, 2015 - 5:25pm Permalink
Good questions Robert. I'm an old-school diesel truck fan for several reasons. # 1 is the longevity of the diesel engine. In the case of automotive applications this has not always been the case. Honda's diesel applications(Civic,CRV and others) are very popular in Asia and parts of Europe due to a high percentage of diesel fueled personal transportation. Driven by fuel economy and the favorable price and supply of diesel fuels, 55 % of the cars and light trucks in Europe are diesel fueled, many on imported diesel from North America. I'd like to see a diesel engine for pilot, Ridgeline and CR-V. Will it happen? As Chris at Honda says it,"anything is possible." We'll know more as the year unfolds. I still look to a turbo charged engine,electric motor hybrid for Ridgeline. Now, wouldn't that be something? Note: Honda doesn't require a pickup offering to carry the line up as demonstrated by current and past sales volume.
Bill wrote on January 15, 2015 - 12:38am Permalink
Sure looks like a three cylinder to me!
Parks McCants wrote on January 15, 2015 - 12:16pm Permalink
How you doing Bill. Happy New Year. Here ya go...