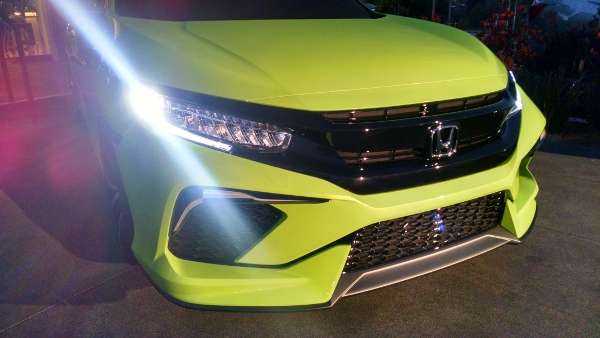 Honda-Torque News had the opportunity to spend some one on one time with 2016 Civic at the Honda Dream Garage event. Here’s what we learned about 2016 Honda Civic.
Advertisement

As photogenic as 2016 Honda Civic coupe may be, in person, its styling is inspirational and thought provoking. Honda is head and elbows into a reinvention of its entire lineup. 2016 Civic’s body language punctuates the future-forward design direction of the company, with more than just a hint of greater performance to come. Honda Design has ‘killed it,’ with 2016 Civic.

On our personal radar for the Honda Dream Garage event was the measurable refresh of the 2016 Honda Accord, it did not disappoint. Honda -Torque News knew that everything in American Honda’s lineup, from power generators to boat engines, side by sides, robotics and motorcycles, would be present.

However, we weren't anticipating a cameo appearance of the New York International Auto Show revealed 2016 Honda Civic concept, but there it sat in its day-glow green glory, blocking the entry to what was arguably a 5-star dining experience. Auto review journalism is a tough job, but somebody has to do it!

Suddenly, for us, dinner took a back seat to this photo opp, with (hopefully) a handful of questions to follow. And yes, 2016 Honda Civic is visually stunning in person. In-fact, it inspires this hard corp Honda Fan to build yet another exceptional ‘Tuner.’ Unfortunately, the show concept sported black-out windows; so we didn’t gain a view of the interior.

Nonetheless, on returning home to Eugene, Oregon, I did receive an email from this guy, will just call him Jason, he's definitely in the know.

2 new engines, 2 transmissions = more, or is that greater?

Technically, for Honda to develop the 10th generation Civic world car is very doable. The largest engine builder on the planet most likely has the resources at hand. The challenge for Honda is to present a visually appealing Civic, featuring greater power, greater fuel economy, greater standard features and greater ease of expanded person to auto connectivity. We predict that when 2016 Honda sedan comes to market in late October 2015(educated guess) it will sell in unprecedented numbers, as 2016 HR-V has. If Civic’s body styling is any indication of handling and performance, Honda will once again hit a home run with the timely release of 2016 Civic.

We anticipate the horsepower output of this engine to approach 150+, with combined driving fuel economy approaching 40 mpg. a 6 speed manual and CVT transmission option will be available throughout the lineup. According to our sources, a 1.5 liter turbocharged EarthDreams ™ direct injected 4 cylinder gasoline engine will perform power duties throughout the balance of the lineup; with CVT transmission technology standard throughout the premium sedan variants. As to Si , or a performance coupe variant, they’re promised; but will follow the initial sedan arrival in Q2 2016; all in good time! As to the power output of the 1.5 Liter turbocharged engine, that specification remains cloaked in secrecy. However, looking to Japan, the current 1.5 liter turbo produces a meek 148 horsepower, but where it truly performs is in the midrange torque.

looking to the numbers: Honda-Torque News discovers that the turbocharged 1.5 liter EarthDreams ™ gasoline engine produces an impressive 150 lb-ft torque from 1600 rpm and doesn’t stop until it hits the revlimiter.

To put that number into perspective, the current 1.8 liter Civic engine produces 143 horsepower and 129 lb-ft torque, coming on line at 4300 rpm. Honda’s turbo engine will produce copious amounts of usable torque from the low-range on up. Gone is the high-rev sweet-spot search.

When and how much?

That we don’t know, but we can tell you this: Honda historically holds the MSRP of a new model year within $300 of current MSRP. Also, we note that Honda preserves affordability at the entry-portal to a lineup be adding a Touring edition to the top of the lineup; we expect the company to follow suit with the introduction of 2016 Honda Civic. In short, your basic Civic will come to market with an MSRP slightly below $19,000

We further look to 2016 Honda Civic to be the most technically advance sedan and coupe in the cars 3 + decade history. Look for an expansion of active safety features, touch screen, and personal cell phone integration connectivity. Where's the hatchback? That’s another story.