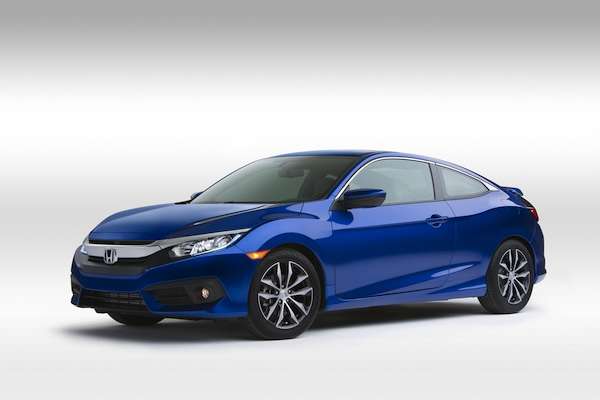 In Tuesday’s news, according to an unsubstantiated rumor with “official” overtones, there may be less than a week to go before (initial) 2016 Honda Civic Coupe deliveries start trickling onto your favorite Honda lot -- maybe!
Advertisement

While digging through my e-mails Tuesday, I came across an item of interest for those of us that eagerly await the arrival of the 10th generation 2016 Honda Civic Coupe. Someone -- generally “in the know” about such matters, tells Torque News that 2016 Civic Coupe delivery is just around the corner.

Well, without pulling the rabbit out of the hat, I’ll state with strong conviction that our source is generally “dead-on” when it comes to breaking Honda related news.

As of this posting, Honda public relations remains very cautious as to announcing an estimated delivery date with any certainty, or pricing for that matter. Understood -- 2016 Civic Sedan is the best selling Civic offering since pre-recession Civic sales levels -- there may be a bit of supply and demand Civic Coupe override here. Personally, I appreciate A.H.M.C.’s cautionary approach, It leads to much less disappointment for Honda Civic Coupe fans, and patiently waiting future 2016 Civic Coupe owners.

No worries, 2016 Civic Coupe will come in due time

Personally, I like the dynamic engineering, styling and subsequent road handling experienced behind the wheel of Civic Coupe. We discovered new found driving dynamics while on the Road to San Diego, California. You may catch that initial drive and ride experience here.

The compact coupe segment receives a wake up call

Built on the same world-platform as the highly acclaimed 2016 Civic Sedan, and soon to be revealed to North America 5-door Civic Hatchback Concept, the more powerful and upsized Civic Coupe is the most technically advanced and refined in the Civic brand’s 43 year history.

On its timely arrival, Civic Coupe will be the second of a 5 body design variant, performance series -- the most diverse lineup since Civic’s introduction to the United States in the early 1970s. This is great news for Civic fans of all ages.

Available in 8 trim variants, 2 engines, and 2 transmission combinations, the 10th generation comes to market with a (unsubstantiated)base MSRP of $19,050 nicely equipped -- right where I predicted the $ numbers to land at the Los Angeles Auto Show. No surprise there, although like I said, Honda as of this posting has not published the pending dealership delivery date or the MSRP.