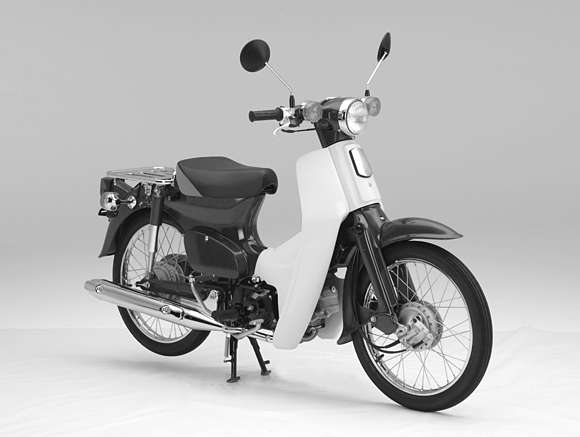 That’s right, when looking to the numbers we find that the 2014 Honda Accord Hybrid is pound for pound more fuel efficient than a Honda 49cc Super Cub motorcycle.
Advertisement

The yin and yang of the Honda line were in the news this week. The world’s best selling motorcycle, the Super Cub received a 3 D patent in Japan, while the Accord was downgraded by Consumer Reports for not achieving the stated EPA mpg in testing.

On the economy side: A 49cc Super Cub has a stated fuel economy of 100 mpg, with some riders claiming 150 mpg. The 2 wheel gasoline fired Cub weighs in at 175 lbs and can accommodate up to two people. The Cub is available in the U.S. as a Metropolitan or Ruckus, for those with $2600 to spend.

We’ve spoken with two Ruckus owners, young ladies. Living in a university town, they love the Ruckus for ease of handling, fuel economy and bullet-proof reliability. It’s good looking and fun, in the rain? not so much so.

We’ve also interviewed a Honda Hybrid owner or two. They too love their Hondas for the same reasons as the Cub and Ruckus owners. For them, the gasoline hybrids, while not being a tire burner, provide exceptional reliability and comfort while sipping gasoline.

Thursdays announcement by Consumer Reports got us thinking a bit. Coming from a generation of drivers that were happy to record 24 mpg while blazing down the highways of the 1980 and 90s; the 40+ combined driving mpg of the 2014 Honda Accord Hybrid is a true head scratcher.

While this may be a bit simplified, we at Torque News-Honda see it this way. A two wheel Ruckus or Honda Super cub with an assumed load of 375 lb, tips the scales @ 550 lbs.
pushing the stated mpg to 150 miles per gallon, we discover that the weight to fuel consumption ratio of the Cub = 3.66. That’s assuming that fuel consumption is a constant.

Looking to the Accord Hybrid in its minimalist trim, we find the best selling sedan in North America tipping the scales @ 3600 lbs. We’ll add 4 average sized passengers (575 lb) and 200 lbs of luggage for this comparison and use Consumer Reports 40 mpg average fuel consumption.

tony wrote on June 2, 2014 - 11:42am Permalink
Will this vehicle be allowed in California freeways?
Parks McCants wrote on June 2, 2014 - 1:24pm Permalink
Good day Tony... No, a motor scooter or cycle must have a displacement of 150 cc or more to travel on the Hiway in California. You will see the notification on most freeway on ramps. The Honda SuperCub is available outside of the U.S. in a 150 cc verient. There is a 150 cc scooter available through American Honda Motors.