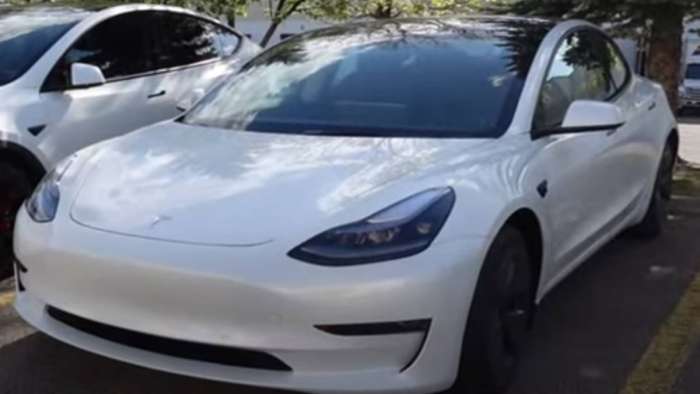 Is a 2022 Tesla Model 3, RWD worth it? We have a review from one owner who did a quality check on the car shortly after its delivery. Were there any issues? Let's find out.
Advertisement

I have a Tesla Model 3 RWD with LFP batteries on order and wondered if this was the right choice. I found a recent owner and he did a YouTube video about his experience with this vehicle. Let's see what he had to say.

Ken had a brother who picked up a brand new Tesla Model 3 RWD with the LFP batteries. Those batteries can be charged to 100%. Let's see what his quality control session found and if there were any issues.

First off, the panels were checked for any gaps. While checking all the edges, everything was pretty perfect and flat. There is a new matrix light inside the head lights of the car, which is an addition to the car. These headlights are a cluster of LED lights built around the high-beam part of the headlight. This cluster of headlights allows for different settings and capabilities, such as lighting up all or a portion of the road. This is much different than most cars that simply have one high beam light.

The front passenger side of the car has double paned windows, as does the driver side window. The windshield looked very smooth and clean with no issues. At the back of the car, the panels looked smooth and had no problems. There is also automatic trunk opening - something all new Tesla vehicles have at this time.

The back lights are smooth and have no issues with the edges or panel gaps. This car has the Aero wheels, which are more fuel efficient.

Inside the trunk of the car, there is an open trunk with a cubby hole on the left hand side and a flap on the floor that can be opened to store stuff underneath the trunk.

Inside the car, there are mats, but those had to be purchased separately. Tesla really should include mats inside the cars...

The glove box is easy to open with a simple button on the center console. The battery can charge to 100% as is evidenced by the center console and the battery setting which shows 100% as an option. This wouldn't be there if it was a nickel/old battery.

There is even text on the center screen that says it is recommended to charge your car to 100% once a week in order to keep the battery fully charged.

For the first two weeks, the car has had no issues. This was comforting for me as I have mine about to be delivered in a month or two.

David Fritzinger wrote on June 30, 2022 - 6:54pm Permalink
My Model 3 long range was delivered about a week ago. I concur with the article, in that assembly of the car seems excellent. No noticeable panel gaps, and I love how the car drives. I’m not sure if I have the matrix headlights (what can I say. I came sown with Covid about the time I got the car, so my observations are pretty limited). All in all, I’m pretty happy with the car.
Scott Titensor wrote on July 10, 2022 - 4:01pm Permalink
Purchased our 22 model 3 RWD with LFP battery pack end of December 2021. Has all the changes reviewed in this article. We have really enjoyed the car. Ordered blue paint and sport wheel options. Delivers great performance, cruises down the freeway with ease, range has never been a problem. Our priorities were price, range, maintenance cost and long term durability. Comfort, appearance, were also high considerations. Our model 3 RWD has delivered on all fronts, we now look for excuses to drive the car.
Frank Lockwood wrote on August 6, 2022 - 4:19pm Permalink
Received my 2022 Model 3 rear drive lfp May 11.Great performance, range good and acceleration is fine and frequently am exceeding EPA range when driving for economy.Only complaint is lower rear driver side rear door is slightly in from main body.In effect the leading edge of rear panel sticks out slightly.this could be a paint erosion problem over time.