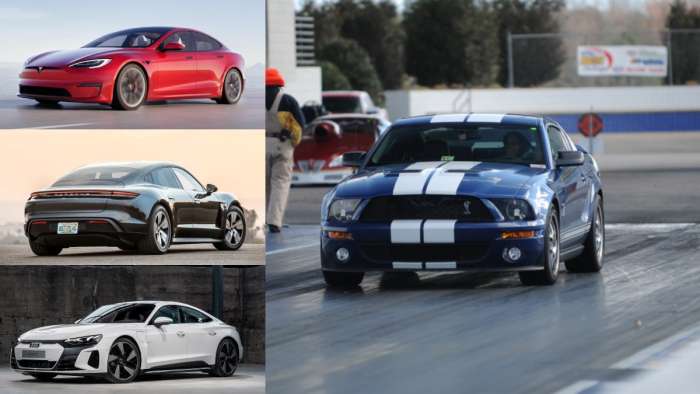 What Could Make A Long Time Mustang Driver Switch To Electric? Check Out The Audi E-Tron GT

The Audi E-Tron GT, new in 2021, is a stunning EV. While related to the Porsche Taycan, the E-Tron GT also features Audi’s fabled Quattro all-wheel-drive system. Audi has made the E-Tron GT with the driver in mind and it shows. My friend has been driving Ford Mustangs for the last 20 years, but he’s considering swapping to an EV thanks to the E-Tron GT, and here’s why:
Advertisement

Gregg, who currently drives an ’08 Shelby GT Mustang, has been driving a Mustang in some variant or another for the last 20ish years. He’s always been a fan of cars and going fast, but he states that the Porsche Taycan was the first time he looked at a car and thought that it might be more vehicle than he could handle. I asked him what EV he’d want, if he could have one and he immediately responded with the Audi E-Tron GT. When asked to expound on his reasoning, he gave me 5 simple reasons. Let’s take a look:

1.) Exterior Styling: The E-Tron GT keeps the traditional sedan stylings of other Audi greats, like the A4, but the hood is kept lower. The front fascia of the E-Tron GT is a little more busy than that of the Porsche Taycan, with whom it shares an astonishing amount of technology. While the Taycan also has a Wagon/Hatch variant available, the E-Tron GT is just a sedan for now. It gets to compete with the likes of the Tesla Model S, the Plaid version of course just dropped recently. The E-Tron GT RS, it’s highest performance version costs around $10,000 more than the Model S Plaid. While I’ve heard the Model S compared in aesthetics to the Toyota Camry, the Audi E-Tron GT definitely looks more like a sports car to me, even if it doesn’t have quite the same performance of the faster Plaid.

2.) Interior Styling/Tech: Audi’s Interior is always geared towards the driver, and the E-Tron GT is no different. The interior with wooden accents is absolutely stunning, even when compared to the updated trim in the newer Model S Teslas. I honestly think that Audi goes beyond even the poshness of Porsche’s Taycan and Macan, while it doesn’t have quite as large an infotainment system as the Tesla, it seems to be more like a traditional car. Audi also has chosen to leave off one-pedal driving, opting instead to keep the two-pedal driving with which most ICE drivers will be familiar. 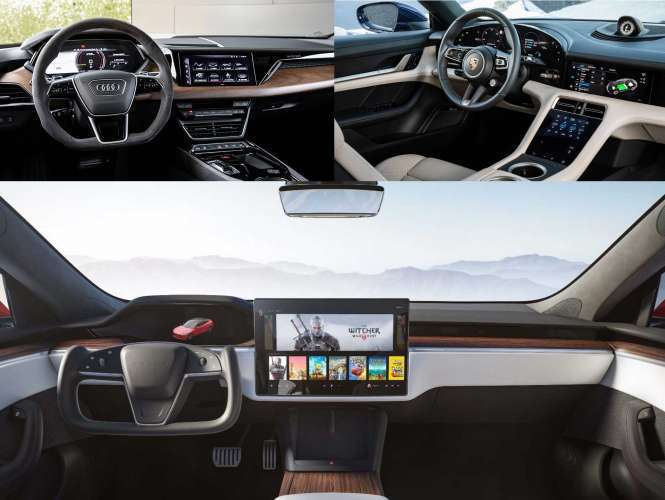 3.) Performance Capabilities: Like it’s cousin, the Taycan, the Audi E-Tron GT uses a 2-speed transmission, with one gear for launch and the other for more efficient travel. The E-tron GT isn’t quite as fast as some of its contemporaries, but its 0-60 mph sprint is still only about 3.1 seconds. With acceleration like that, it will leave most ICE vehicles in the dust, though of course beasts like the Challenger Hellcat X might give it a run for its money.

4.) Audi’s traditionally high quality and resale value: Audi has always been known for spectacular build quality. They make fantastic Rally cars because they tend to be reliable, and their all-wheel drive system is fantastic. Audi is also highly rated in safety. These facts come together to make Audis hold onto value much better than some other vehicles. That said, in the current market, even used vehicles are going for good money right now.

5.) The Exclusivity: While the Porsche Taycan is beautiful, and the Model S is signally faster, the Audi E-Tron GT seems like it will be seen less frequently than either and when it is seen, it’s sure to draw positive attention.

Gregg, like many American drivers, is worried by the range currently available to electric vehicle technology. While Audi’s fast-charging should allow the RS E-Tron GT to charge to nearly 80% in about 20 minutes, those fast chargers seem to be few and far between in the parts of the South-Eastern United States that Gregg and I frequent. He is waiting until the infrastructure requires less planning for trips before he chooses to trade in the keys to his Shelby, but he’s said that when the time comes to trade in his pony car, he might just go Electric.

DeanMcManis wrote on June 18, 2021 - 1:33pm Permalink
There is a LOT to like about Audi's E-Tron GT! I really liked the Porsche Mission E concept's styling, but I think that the design was watered down by the time that it became today's Taycan. The E-Tron GT however kept it's bold styling that looks like a familiar, sporty Audi, but maintained the muscular bulges of the initial E-Tron design. Audi's fit and finish seem to be just as you would expect from an expensive, European luxury GT. Like the Taycan, Audi will sell all of the E-Tron GTs that they can build. Most will be sold to traditional Porsche, Audi, Mercedes, and BMW buyers, moving to their first EV. But some will be like Gregg here, who wants to own an amazing, performance car, and found that this cool E-Tron GT ticks all of the boxes on his wish list!
Timothy Boyer wrote on June 18, 2021 - 6:07pm Permalink
I agree, but he will have no problem selling or trading his current Shelby: https://www.motortrend.com/news/2008-ford-shelby-gt-verdict/ Vive la difference!