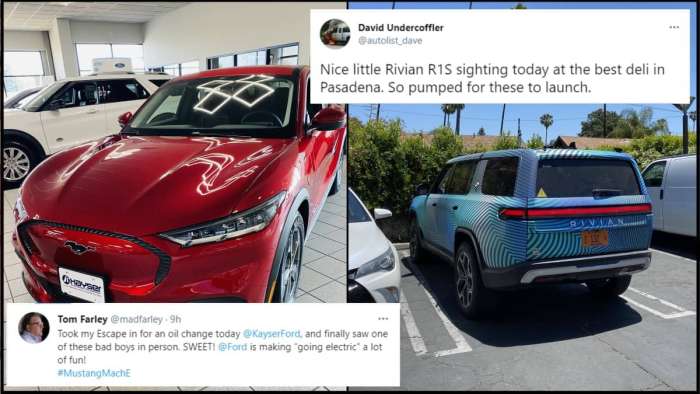 Rivian R1S Sighting In Pasadena, Mustang Mach Es In The Wild; Is The Vehicle Drought Coming To An End?

With Tesla’s spectacular Model S Plaid event and Ford’s Maverick reveal, it can be hard to remember that we’ve been suffering a shortage of both new and used vehicles. Today, we got sightings of both a Spy-shot Clad Rivian R1S, and a show-room floor Ford Mustang Mach E in the wild. I’d like to think that at least some of the waiting for deliveries on ordered vehicles may finally be coming to an end.
Advertisement

Most automotive manufacturers suffered numerous setbacks over the last 2 years, not the least of which has been a shortage of chips. This severe drought of semi-conductor chips has been caused by the rippling impacts of COVID-19, cryptocurrency mining, and just general overwhelming demand and, unfortunately, the end is not yet in sight. EV Giant, Telsa has removed the moving lumbar support from the passenger seats of its Model 3 and Y, and even companies with a more tried-and-true production system, like Ford, are finding it difficult to meet the demands of the market. Many prospective new Bronco drivers are still waiting eagerly for their ordered machines.

Yesterday’s Tesla Model S Plaid event revealed the spectacular vehicle and indeed, we’ve even seen tweets of folks being amazed by the new fastest production vehicle in existence. 25 of the vehicles have apparently been delivered to new owners, and I can only imagine the excitement those owners must be experiencing from their new steeds. With the insane 1.99 second 0-60 that nears the performance of the SIGNIFICANTLY more expensive Rimac Nevera, The Model S Plaid is finally finding itself on the streets and I’m excited to see one in the wild.

The Rivian R1S made an appearance today, wrapped up in a spy-shot camo pattern that is very similar to the R1T that we saw last month. Hopefully, with these increased sightings, the first deliveries and full launch will be met soon, with the estimated delivery of the both the first R1Ts and R1Ss to be in July. The SUV looks amazing in the camo pattern, and part of me hopes that that will be one of the options available from the factory. With an estimated range of 300 miles and a towing capacity of up to 7,700 pounds, the R1S is a beastly SUV that should be able to handle some really rough terrain.

Nice little Rivian R1S sighting today at the best deli in Pasadena. So pumped for these to launch. pic.twitter.com/FYkgAfdzWN

Like the R1T, the R1S should be high enough off the ground to get most places and would probably outstrip the Jeep Wrangler 4xe on most terrains. It’s got 4 big motors and 3 rows of seating and seems like it could honestly provide more utility to the SUV than any of the other SUVs that have been released recently. The Mustang Mach E is amazing in its speed and power, but I feel that it’s more suited to being a big hatchback than a small SUV. The R1S is more expensive than either the Mach E or the Wrangler 4xe, with a starting price of $70,000, but it also doubles the towing capacity of the Wrangler (or the Toyota RAV4 Prime) and it has a significantly higher ride height than the Mach E. One Tweeter claimed that the HUMMER EV looks like the R1S with Caps-lock on, and I can’t fault them in the slightest.

Even though we’re starting to see more vehicles, like the Mustang Mach E spotted at the show room of the Kayser Ford Lincoln in Madison, Wisconsin, we aren’t out of the woods yet, and it will still be a long slog before chip manufacturers are able to keep up with the demand that our tech-hungry populace has created. Fortunately, as the world starts to get back into the swing of things and return to some degree of normalcy, we should see the automotive market do similar, although it’s unclear if the cost of Used vehicles will go down as new vehicle deliveries are met.

Took my Escape in for an oil change today @KayserFord, and finally saw one of these bad boys in person. SWEET! @Ford is making “going electric” a lot of fun!#MustangMachE pic.twitter.com/W133COj3Rk

With the difficulties that these manufacturers are facing, some companies, like Tesla, are increasing the cost of their line-up. Dealers of traditional cars, like Ford, Toyota, and Chevy, are known for marking up their vehicles when they’re brand new and hard to find, with some going as far as to tag a 2020 Corvette Stingray with a 25,000 markup, knocking it into the 6-figure range. Only the future can tell us if Rivian will boost their prices when they release, and whether Ford can manage to bring their Maverick Pickup to the market for the amazing price they’ve promised.