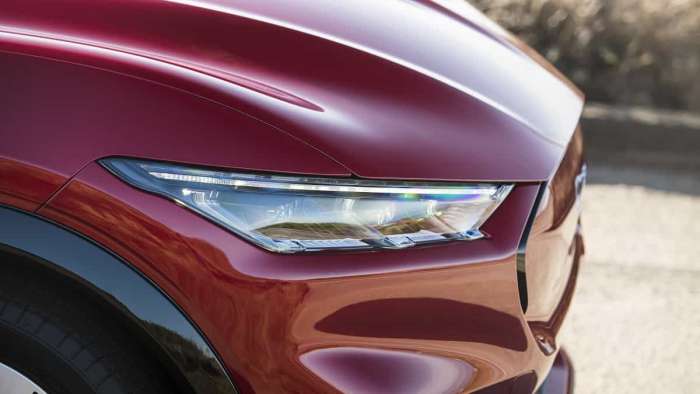 Despite many reasons to stall, the Mustang Mach-E continues to be delivered at a record pace. Here’s why it matters for Ford, for shoppers, and EV adoption in America.
Advertisement

Ford’s battery-electric Mustang Mach-E is coming to market full-throttle. Yes, we know EVs have no throttle, but we like the expression. Despite serious headwinds, including a global pandemic and serious supply-chain issues causing an industry-wide slowdown in production, Ford is still putting thousands of Mustang Mach-Es in driveways after four months of strong sales and deliveries. This is important for both Ford, buyers, and EV adoption.

Why The Mustang Mach-E Launch Matters For the Auto Industry
Will Tesla take over the global auto industry and put Ford, GM, Toyota, and VW out of business. No and no. The Mustang Mach-E launch helped prove two things. First, Tesla has no secret sauce. Ford’s Mach-E is nearly identical to Tesla’s newest model, the Model Y, and has some advantages nobody saw coming. Like a better tablet-like infotainment setup. The real-world usability of these two great vehicles was recently explored by a pair of experienced owners that easily dispels the Tesla range, efficiency, and charging advantages we hear so much about. Tesla owners are buying Mustang Mach-Es and trying to tell the world why they did. If Ford can “build a better Tesla,” so can GM, Toyota, and VW.

Second, the strong Mustang Mach-E launch proves that a nationwide rollout of a BEV can succeed. There is little need or purpose for the ZEV-state crutches and taxpayer-funded kickbacks to buyers and automakers. The Model Y is selling at MSRP plus Tesla’s delivery fee, the Mustang Mach-E is selling above MSRP in places, and so is the Toyota RAV4 Prime. Every new AWD crossover EV is being delivered as fast as automakers can build and ship them. There is an unsatisfied demand for practical, satisfying crossover EVs. The Mustang Mach-E’s strong demand and entirely positive ownership response prove that electric vehicles are not good electrics first, but rather good vehicles first.

Mustang Mach-E Delivery Numbers
Let’s not pretend that Ford lit the world on fire by delivering around 2,000 Mach-E cars in April. That’s like ten minutes of F-150 deliveries. What matters is that Ford didn’t take its foot off the pedal. The company could easily have set the cruise control, milked the over 6,000 units it delivered in Q1 and called its newest BEV a valiant effort. Instead, Ford has continued to push the Mustang Mach-E. Just like Toyota is delivering more RAV4 Primes than it predicted or “promised.”

Even behind the scenes in communications that consumers don’t see directly, Ford continues to support EV adoption. Its press-page summary of its April sales results starts with “FORD ELECTRIFIED VEHICLE SALES…” Upfront, leading the discussion is the electric Mustang Mach-E. By the way, Ford is also pretty proud of its green powertrain-equipped F-150 Hybrid.

To learn more about how Ford kept the Mach-E’s launch on track, check out this deeper dive by Marc Stern. Marc is a veteran auto journalist who has witnessed more vehicle launches than most auto executives.

For a deeper dive on the numbers Ford has put up, check out Jimmy Dinsmore’s look at the results. Jimmy is the guy on our team who (literally) wrote the book on the Ford Mustang. If Ford has won him over with its Mach-E, that really means something.

If you want historical EV launch data, our prior story gives it all including charts and graphs. The Ford Mustang Mach-E launch is either the first or second fastest BEV launch ever. We’d know for sure where it ranks, but Tesla hides its facts and figures. That should also tell you something.