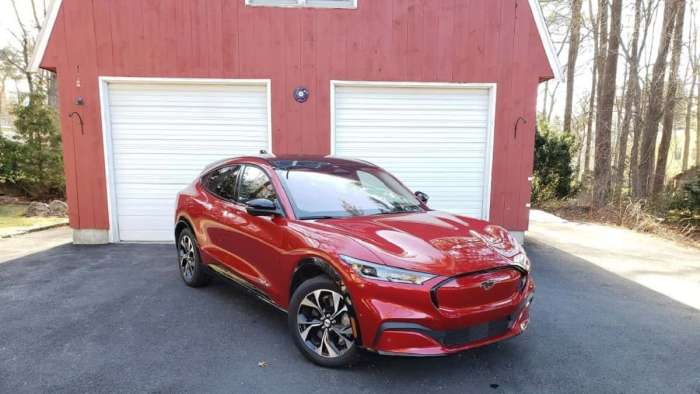 Ford’s first quarter of deliveries for the Mustang Mach-E in the US market exceeded prior launch volumes by GM’s Bolt, Tesla’s Model 3,X, and S, Toyota’s RAV4 Prime, and the Nissan Leaf.
Advertisement

Before we begin, one fact jumps right off the delivery report pages when we analyze the Ford Mustang Mach-E’s delivery volume. The Mach-E entered the market selling at about number 4 overall in the US EV market. Not bad for a new entry. Generally, automakers need six to nine months to reach peak production volumes of a given model, so the Mustang Mach-E could very well be the top-selling electric vehicle in America by later this year. Ford reports the Mustang Mach-E is a conquest model, and that 70% of the Mach-E's buyers come from competitive brands.

Ford Mustang Mach-E Delivery vs. Tesla Launches
Unlike every other automaker doing business in America, Tesla does not offer model-level breakdowns for the vehicles it sells in the US. We are not sure why Tesla opts to hide this data from investors and fans, but it does. Prior to this year, Inside EVs did a very good job of tracking the sales of Tesla models in the US by using RMV and VIN data. However, after consecutive years of overall EV sales declines, the publication stopped. Other outlets like TrueCar and GoodCarBadCar publish Tesla sales numbers, but they are just rough estimates not based on company data or reliable third-party data.

For this reason, we really don’t know the month-to-month delivery numbers for the Tesla Model Y in America. However, we do have good historical data about Tesla’s top-selling vehicle, the Model 3, and its legacy models, the X and S. When Tesla launched the Model 3, the undisputed EV delivery volume champion of America, it took Tesla twice as long to reach the delivery volume that the Mach-E had in its initial launch quarter. The Model 3 was Tesla’s fourth EV launch.

Let’s not dive deeply into the Roadster and Model S launches by Tesla. It’s not even close to a fair comparison. After all, Tesla was only a ten-year-old company when it launched the Model S. Interestingly, the S launch deliveries were roughly the same as the X.

RAV4 Prime Plug-in Hybrid-Electric Vehicle
One of the top-three highest volume EV launches in American market history was the RAV4 Prime. Toyota made (unwanted) headlines when it made the mistake of being honest in an interview with the Tesla-advocacy publication, Elektrek. That publication called Toyota’s projected launch volume “laughable,” despite it being among the most rapid in EV history. Some publications have their favorites and invest in the stock of brands they promote. (We don't for the record).

In any case, Toyota is way ahead of the delivery schedule that it conveyed to Elektrek. Toyota has delivered just under 6,000 vehicles in America to date, over a span of about eight months. At last check, Toyota was on a pace of roughly 3,000 units per quarter and is still ramping up.

Chevy Bolt vs. Ford Mustang Mach-E Deliveries
If anyone should be able to hit the ground running, it is the legacy automakers. They know how to do launches, having done literally thousands before. The Chevy Bolt had a great launch by any small car measure, but particularly for an electric vehicle. In its first quarter, GM sold 2,693 Bolts. It took GM twice as long to match the delivery numbers the Ford Mustang Mach-E achieved. In its first year of sales, the Bolt was the number-two-selling EV in America.

Nissan Leaf Deliveries vs. Ford Mustang Mach-E
Let’s have some context before we discuss the Leaf. When the Leaf entered the market in December of 2010, it was America’s first affordable BEV for sale in the modern era. And it remained so for quite a while. It took Nissan three times as long to reach 6,600 units delivered as it took Ford to deliver that volume of Mach-Es.

Volkswagen ID.4
The ID.4 is an exciting new market entry. VW does not offer a monthly breakdown of its US model sales, but it did report that in the past quarter, the company delivered 474 ID.4 cars to US owners.

Notes About the Mach-E Launch
Some fans of other brands may cry “foul” when we discuss the launch of the Mustang Mach-E. After all, the company did deliver 3 units a few days prior to the quarter we are counting. Ford also had a delay due to software issues that held the Mach-E back a bit longer than planned. If you have followed electric vehicle development from its origins back in the 2010 rebirth period, you know this is pretty much the norm for all EV launches. Hold it against Ford if you like. Or simply substitute our comments about the Mach-E’s deliveries to “Its first four months of sales.” Not much changes in the story either way.

Interestingly, Ford is providing dealers with enough cars to not just sell (and sell out of), but also enough that in some places dealers have demo Mustang Mach-Es. One dealer even provided a Mustang Mach-E service loaner to a Ford customer who put their own car (an Escape) in for service. Unlike some brands, Ford seems to be walking the walk when it comes to making EVs mainstream. The cars are available nationwide, Ford is rapidly certifying its dealers to work on Mach-Es, and dealers are offering tire-kickers rides.

It will be fun to look back and see how many Mustang Mach-E cars Ford delivers this calendar year. If the company continues its present pace it will be the second or third-best-selling EV in America for sure. Should Ford continue to ramp up its deliveries, it could easily take the second spot. Not bad for a first-year market entry.
What’s your prediction for the Ford Mustang Mach-E? Will it rival the Model 3 and Model Y for volume in America this year? Tell us in the comments below.

chip tonkin wrote on April 12, 2021 - 12:31pm Permalink
A couple thoughts on the article: kudos to Ford. Seriously. They produced and shipped 6,614 Mach E's to dealerships in the 1st quarter. That is pretty impressive for their 1st EV effort, but these were not sales to customers (basically just filling the pipeline). Tesla numbers are always actual sales to actual customers. And Ford has already announced they are only producing 50,000 Mach E's this year with 60% going to Europe. So upside is pretty limited this year with only 20,000 US sales. Maybe next year they will be a bit more ambitious. Tesla has a decent shot at 500,000 US sales this year
John Goreham wrote on April 12, 2021 - 3:20pm Permalink
Normally, I'd say that the difference between a manufacturer's delivery data and the actual private owner driving the car would be meaningful, but Ford also reports its vehicles' days on the lot. The Mach-E is averaging 4. So, the data in this story is pretty much spot on. Those four days are basically dealer prep and delivery appointments. Also, if Ford's 20K units in year one prove to be accurate, it will be either the top BEV ever in the American market for year one sales, or number two. We'd know which, but Tesla won't report its sales by model.
Spencer wrote on June 24, 2021 - 12:05pm Permalink
The interesting fact that was left out of the article is that Ford sold 3739 Mach-e's in the 1st month, which means the following 2 months combined sold less than the 1st month.
John L. Pool wrote on April 26, 2021 - 10:39pm Permalink
John I'm curious about the purpose of this article? When one states that "It took Tesla three months just to sell ten Model X cars in a month" it appears as if the writer is attempting to imply that nobody wanted to buy a Model X and it took Tesla three months to find buyers for ten Model X cars? Obviously that is not true. The Model X was a production nightmare that has been well documented. Demand has never been a problem. Tesla still has a lot to learn about mass producing vehicles. Ford has taken a much more cautious approach and is entering the market long after many other auto manufacturers have introduced EV's and have help to build the market demand for EV products. Ford STARTED 2021 with 6,717 Mach E's produced in 2020 according to the Ford Shareholders report. In Q1 of 2021 Ford has produced 14,805 Mach E's. So in 2020 and 2021 they have produced 21,522 Mach E's (February 2020 through March 2021) and have sold 6,614. Tesla sold approximately 145,000 Model 3's in its first full year of production in 2018. In 2019 Tesla sold over 300,000 Model 3's worldwide. Ford's initial goal of 50,000 sales for the first full year is almost a 3rd of what Tesla sold of the Model 3 in its first full year of production. Ford has been very conservative with production goals and I'm not sure they realized the demand they would have for EV's. The Mach E is a great vehicle and it will encourage Ford to keep moving forward with EV plans for other vehicles. Tesla does report sales by model number in its press releases after the quarterly shareholder meetings. As you know, Ford and other legacy companies report sales when they hit dealer lots, not customers hands. It appears you are very excited about the Mach E. I am as well, it is a nice car and great "first effort" by Ford and I can't wait to see what the GT model has to offer.
John Goreham wrote on April 27, 2021 - 7:21am Permalink
All the major EV launches by all brands in modern US market history are included in the story. Why did you feel so strongly that Tesla was wronged by the facts? You are mistaken that Tesla releases deliveries by model number by market at its annual shareholder summary meetings. Feel free to attach a link to Tesla's US market Model Y deliveries in Q1 if you like.