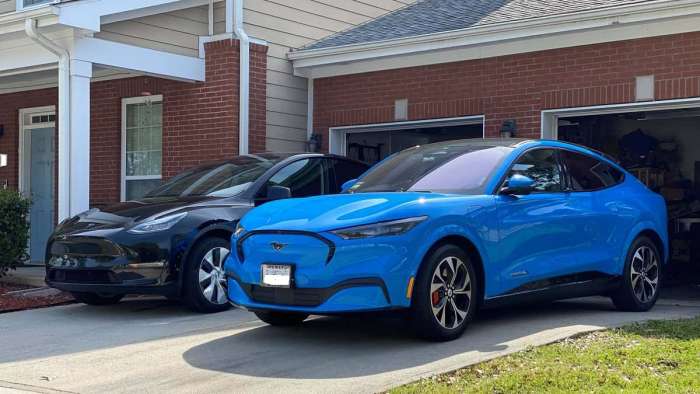 Tesla owners are very brand loyal. However, many also cross-shop other green vehicles, particularly crossovers. Here is the story behind why a Model X owner opted not to buy a Model Y when he recently shopped for a second family vehicle.
Advertisement

Sergio Rodriguez is the proud owner of a Tesla Model X. He’s an active participant on Tesla forums and clubs, and he even uses an image of his Model X as his personal Facebook top of page image. When it was time to shop for a second car he made Tesla’s Model Y his benchmark for comparison. Interestingly, he opted to purchase a Ford Mustang Mach-E instead.

Tesla Owner Cross-Shops Ford Mustang Mach-E
Mr. Rodriguez drove the Model Y and the Mach-E back to back and came to many of the same conclusions that we did when we evaluated the Mustang Mach-E back to back with the Tesla Model Y. He found that the Mach-E is quieter and more comfortable, yet offers identical performance to the equivalently-priced Model Y. The Mach-E’s infotainment system also ended up being one advantage in Mr. Rodriguez’s opinion.

Consensus on Ford Mustang Mach-E Strengths Compared to Tesla Model Y
Two areas that we didn’t test for, but that this seasoned Tesla EV owner did, were charging rates and energy efficiency. Mr Rodrigues summarized his findings by saying, “I found the Mach-E to be more efficient than the Tesla. The Mach-E took 41kW of charge in 25 minutes. The Tesla took 40kW of charge in 25 minutes. Both were on a 150kW charger. Efficiency was also a factor when planning a trip. The Mach-E showed it could travel 259 miles and arrive at 6%. The Tesla showed it couldn’t travel the same 259 miles without charging. It showed it would arrive with -3%.”

The Tesla Model Y also had advantages over the Mustang Mach-E according to Mr. Rodriguez, such as security monitoring and better frunk space.

This comparison was by no means a runaway win for the Ford Mustang Mach-E. You might say the Mach-E won by just a horse length. Mr. Rodriguez states, “It was a close comparison. I suggest you take them both for a test drive and make a decision for yourselves. I prefer the Mach-E over the Model Y, due to the comfort, quiet cabin and low road noise. The sound system also sounds much better. The efficiency is slightly better on the Mach-E.”

Mr Rodriguez’s shopping and purchase experience highlight how Tesla now has competition from other green vehicle brands. Particularly when it comes to crossovers. For more examples on this subject, check out our story on why some Tesla owners are adding a Toyota RAV4 Prime plug-in hybrid-electric crossover to their family fleet.

Our thanks to Mr. Rodriguez for the permission to highlight his comparison here at Torque News and for the use of his still images. You can see and hear many more details on Mr. Rodriguez's analysis in the video below.

PM wrote on April 1, 2021 - 4:19pm Permalink
The tesla says it can't get there because of elevation changes. The Mache probably bases it purely on distance. Would trust the tesla way more than the mache in this instance.