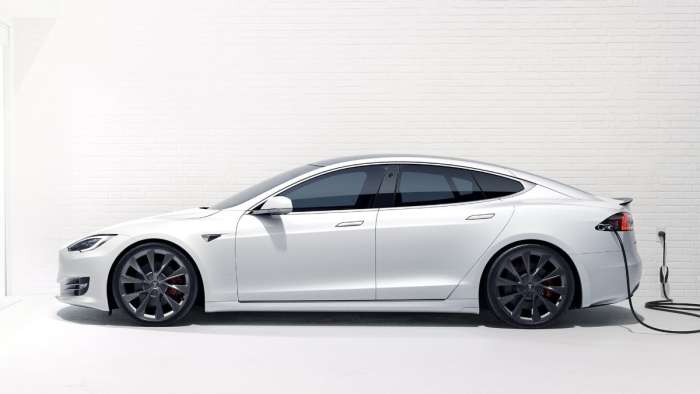 Tesla's Q4 earnings report set to come out a few hours ago. Depending on the numbers Elon Musk might achieve the fifth trench of the CEO compensation package making it the largest payday in history. Refreshed/Plaid Model S might launch too.
Advertisement

Tesla is set to announce the company’s earnings report for Q4 2020 this Wednesday. The report will summarize Tesla’s full-year performance and how the company has fared during the pandemic.

Tesla has already released vehicle production and delivery numbers for the entire year including Q4 2020. In the fiscal year, Tesla delivered just shy of 500,000 vehicles with the biggest deliveries coming in Q4 2020 whenTesla delivered 180,570 vehicles.

According to analysts, Tesla is expected to post record numbers with revenue coming in just under 11 billion and profits soaring to 1.2 billion. If true this will be the 6th straight quarter of profits for the company. Elon Musk has said Tesla will be posting a small profit every quarter going forward.

2020 has been quite a successful year for Tesla. The company's market cap rose by almost 700%, the stock got added to the S&P 500, Elon Musk became the richest person on earth and the company produced half a million vehicles a year for the first time.

Related news: Tesla To Get EU Subsidy For Berlin Battery Plant, But It Might Not Matter

The continued success of Tesla is expected to bring Elon Musk one of the biggest (if not the biggest) paydays in history. According to the CEO Compensation Package offered to Musk back in 2018, the EV maker’s boss will be due to receive stock options of Tesla common stock in the amount of 8.45 million shares.

At Tesla’s current market cap the shares will be worth 7.45 billion dollars. And according to the stock option’s terms, Musk will only need to spend 590 million dollars to purchase the shares. The resulting difference of 6.89 billion dollars will make this the biggest payday in history.

Per the terms of the CEO compensation package, Musk receives no guaranteed compensation of any kind — no salary, no cash bonuses, and no equity that vests by the passage of time. Instead, Elon’s only compensation is a 100% at-risk performance award, which means he will be compensated only if Tesla and all of the stockholders do extraordinarily well.

And as for the financial trenches, there are 8 top line and 8 bottom-line numbers off which Tesla has to hit 12 together with the market cap trenches for each of the stock options to vest. Elon Musk receives stock options worth 1 percent of the company each time Tesla achieves one of the trenches. 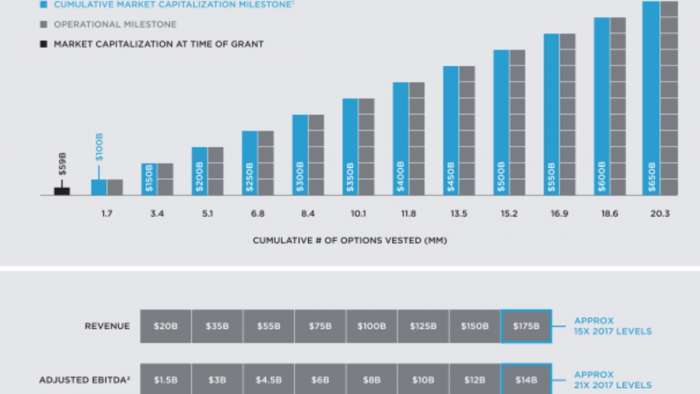 For the final trench to vest Tesla’s revenue has to exceed 175 billion dollars together in 4 consecutive quarters. Or Tesla’s EBITDA (earnings before interest, taxes, depreciation, and amortization) has to be 14 billion dollars summed together for 4 quarters.

There is a 10 year limit for when Tesla has to reach the milestones in order for Elon Musk to receive the compensation. In addition, Musk also has to serve as Tesla’s CEO or Executive Chairman and Chief Product Designer at the time the milestones are reached.

Elon Musk has already been awarded the first 4 trenches of the compensation package. The last one being Tesla surpassing a 250 billion dollar market cap and EBITDA greater than 4.5 billion dollars.

On top of the record numbers, there is an expectation among the Tesla community there will be a “one more thing”. This could be the launch of refreshed Model S or the plaid version of the same care arriving 6 months ahead of schedule. This speculation has been fueled by the multiple sightings of a refreshed Model S testing in the Fremont factory and driving around the plant.

Tesla has also stopped the production lines of the Model S and X back on December 14. Tesla hasn’t come out and specifically said the halt in production is to produce new versions of the vehicle however, taken together with refreshed Model S sighting around the Fremont plant, it seems highly likely a new Model S and X will be announced in the near future.

So what do you think? Does Elon Musk deserve the 6.89 billion dollars he might receive today? Also, do you think the Plaid and refreshed versions of the Model S will be announced with the earnings report? Let me know your thoughts down in the comments below.