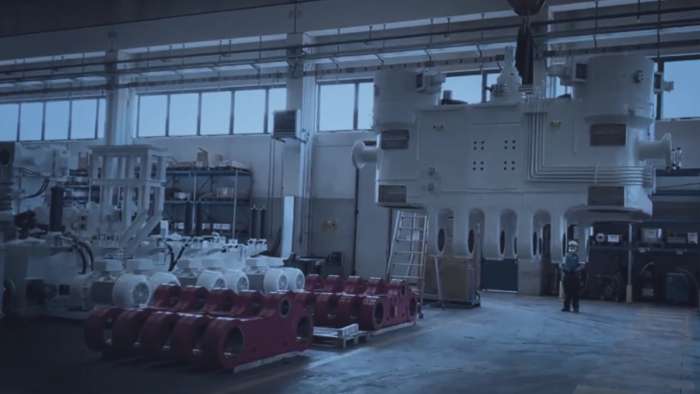 Previously Elon Musk has said Tesla will be using a new more powerful Giga press to build the Cybertruck. And now Tesla's Giga Press supplier, IDRA has revealed the new 9000-ton Giga Press will be completed in 3 weeks.
Advertisement

Tesla has pioneered a new way of building vehicles the world has never seen before. Tesla’s approach, unlike all other automakers that use robots to weld together the chassis of their vehicle, makes use of giant machines to basically “print” a large portion of its cars as a single piece.

This approach allows Tesla to decrease vehicle parts, complexity, and production time. while at the same time increasing the vehicles' stiffness, handling, and performance. And even more impressively, Tesla gets all these benefits at a cheaper price than the conventional way of building cars.

The machine that allows Tesla to make all these improvements is the Giga Press. The Giga Press is a large casting machine that takes in molten aluminum, applies pressure, and outputs large parts of the vehicle as a single piece.

Elon Musk at his recent appearance at the All-In Conference revealed that he got the idea to build the Giga Press by simply asking “how do they make toys so cheap”.

To build Giga Presses Tesla has contracted a company out of Italy called IDRA. And IDRA in its latest YouTube video revealed Tesla’s next generation Giga Press.

Currently, to build the front and rear third of the Model Y Tesla uses a 6000-ton Giga Press. However, the next generation Giga Press will have 50% more power at 9000-tons.

The new more powerful Giga Press, according to Elon Musk will be used to construct part of the company’s upcoming vehicle, the Cybertruck. And now IDRA says in 3 weeks the company will show off a completed piece of the Cybertruck’s 9000-ton Giga Press.

IDRA only shared a 21-second long video as a result it is difficult to make out a lot of details however, we see gigantic pieces of metal being moved around as part of the Giga Press manufacturing process.

This is the first big milestone in the Cybertruck production timeline. However, even though Cybertruck’s Giga Press is completed in 3 weeks' time, that doesn’t mean production of the futuristic truck will begin anytime soon.

Tesla finally flipped the switch on its superchargers in Europe. https://t.co/hVKNQddM3E
-#Tesla pic.twitter.com/KsDfVoAHkX

The machine will first need to be disassembled, shipped to Tesla’s factory in Austin Texas, and then get reassembled on the spot. This process is expected to take several months. After that, there are numerous preproduction steps which will also add several months before a completed Cybertruck starts rolling off the production line.

Currently, all available information points to initial Cybertruck production beginning at the end of 2023 with first deliveries not starting until early 2024.

However, before we can ponder when the Cybertruck will start production, we still don’t know why Tesla will need to use a Giga Press to build the Cybertruck.

The Cybertruck unlike Tesla’s other vehicles which are constructed out of aluminum will be built out of stainless steel. Stainless steel has a much higher melting point than aluminum so it’s not exactly clear how the new Giga Press fits in the Cybertruck’s production plan.

Hopefully, we will get a much clearer picture of Tesla’s rationale in 3 weeks' time when IDRA unveils the 9000 ton Giga Press. Until then, make sure to visit our site torquenews.com/Tesla regularly for the latest updates.