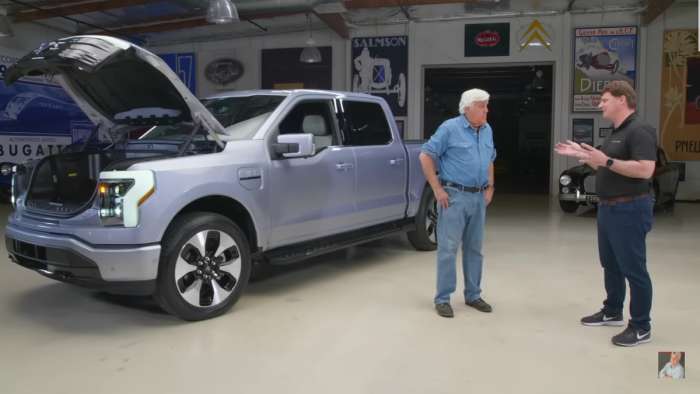 At his latest appearance on Jay Leno's Garage, Ford CEO Jim Farley admitted he convinced his colleagues to increase F-150 Lightning production from 20,000 to 150,000 vehicles a year by pointing to Tesla's production plans at Giga Texas.
Advertisement

Tesla’s mission statement is “to accelerate the world's transition to sustainable energy.” Elon Musk, when he first founded the EV maker said that even if Tesla fails on its own, he will still consider it a success if it’s able to motivate other automakers to create more electric vehicles.

Farley appeared on Jay Leno’s Garage to discuss Ford’s newest electric vehicle, the F-150 Lightning. The Lightning is mostly identical to the internal combustion engine F-150 which has been the US’s best selling vehicle for the past 40 years straight.

And the F-150 Lightning is the first electric version of the pickup truck. The vehicle started deliveries just a few days ago. Individuals who have been able to test drive the Lightning have almost unanimously been impressed with the truck.

Some have even suggested that the F-150 Lightning will outsell Tesla’s Cybertruck when it eventually arrives at the end of 2023 or early 2024.

Going back to Farley's interview. Leno asked the Ford CEO if it was difficult to convince his colleagues at Ford to produce an electric version of the F-150 while the internal combustion version was doing well selling a million vehicles a year.

This is the first time the Ford CEO has admitted that the company’s electrification plans have been directly influenced by Tesla’s success. And not in a small part at that, going from 20,000 vehicles a year to 150,000 is more than 7 folds increase.

Farley’s admission will stand as a testament to Tesla’s role as not just the leader in electric vehicles but, also in inspiring other automakers to accelerate their own electrification plans.

Related News: Elon Musk is Declaring War and the Model 3 and Y are Outselling Everything

Currently, the F-150 Lightning starts at $39,000 for the base “Pro” model. And that’s what Farely meant by the transition point was the relatively affordable $39,000 starting price. F-150 Lightning Pro has a 230-mile EPA estimate range.

There are also other F-150 Lightning versions with 320 miles EPA range. However, those versions have a much higher starting price at $72,500.

As of now, Ford is just starting to produce the F-150 and it’s hard to know how the production ramp will go. However, we will be sure to keep you posted as we get more information. Until then, make sure to visit our site torquenews.com/Tesla regularly for the latest updates.

So what do you think? Surprised to see Tesla increase Ford’s F-150 Lighting production plans by more than 7 folds? Also, do you think the Lightning will outsell the Cybertruck? Let me know your thoughts in the comments below.

For more information check out: Elon Musk Says Tesla Is ‘Going To Slightly Extend’ Giga Texas To Make it ‘Literally A Mile long’