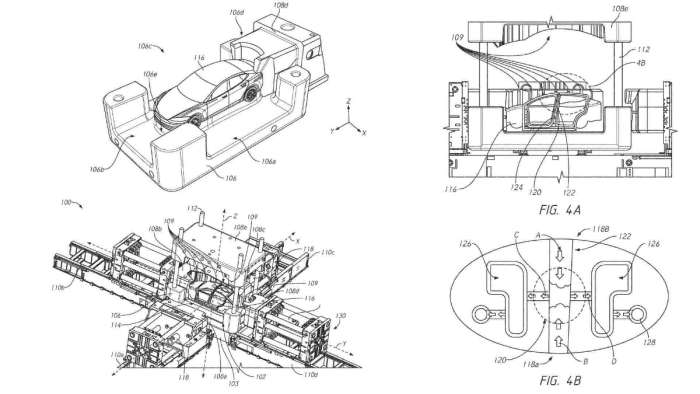 Tesla Already Working On 12,000 Ton Gigapress To Build A Car In One Piece

A new leak from Tesla insiders suggests that the EV maker has already begun work on a massive 12,000-ton Gigapress. The leaks also suggest Tesla will use the new Gigapress to build the entire chassis of a vehicle in one piece.
Advertisement

Tesla is in the process of massively increasing the company’s production capacity. Recently, the EV maker announced a record quarter when it delivered 241,000 vehicles in 3 months. Tesla also set a new monthly production record in China by delivering 56,000 vehicles just in the month of September.

According to Elon Musk, by 2030 Tesla plans to produce 20 million vehicles a year. And to achieve this lofty goal, Tesla plans to grow vehicle production by an average of 50% every year for the foreseeable future.

If Tesla is able to achieve the company’s long-term goal, it would make the EV maker by far the largest vehicle manufacturer in the world. Volkswagen, the current largest automaker by vehicle output produces 10 million cars a year.

However, in order for Tesla to become the largest automaker in the world, first, the EV maker has to streamline the production process. And one breakthrough that helps Tesla to differentiate its manufacturing process is the use of Gigapresses.

A Gigapress is a large casting machine that takes in molten aluminum and can output large chunks of a vehicle’s chassis as a single part. This allows the EV maker to decrease individual parts that make up a vehicle, which in turn means less welding, improved manufacturing speed, smaller factory footprint, decreased cost, and improved stiffness and handling.

This has definitely helped Tesla to quickly ramp Model Y production. However, the EV maker is not content only using a Gigapress in the rear of the Model Y. Recently Elon Musk has said the refreshed Model Y, which will begin production this quarter in Giga Berlin and Giga Texas, will be the “most advanced vehicle in the world with two-thirds of the body cast.”

In a previous article, taking into account Elon Musk’s worlds and Tesla’s Battery Day announcements, I have speculated the refreshed Model Y could have a 475-mile range.

However, in the long run, Tesla plans to go even beyond using a Gigapress in two-thirds of the vehicle and cast an entire car as a single piece. Musk has alluded to this goal on multiple occasions and Tesla has also filed a patent showing a massive machine that can accomplish such a task.

However, we haven’t heard any reports claiming Tesla is looking to build such a machine anytime soon. That is until now. Tesla insiders Alex and Sawyer Merritt have confirmed independently that their sources have told them Tesla is building a massive 12,000-ton Gigapress that can output the entire chassis of a vehicle as a single piece.

For what it's worth, I've heard the same as @alex_avoigt regarding Tesla working on a 12k ton Gigapress. https://t.co/MPqpwSuSoh

In contrast, the world’s most powerful Gigapress, which is currently being built by Tesla’s Gigapress assembling partner IDRA has 8,000 tons of force. When complete this Gigapress will be used to build the Cybertruck in Austin, Texas

However, going back to the 12,000-ton Gigapress rumors, If true, this would mean Tesla’s goal of becoming the best vehicle manufacturer in the world has progressed far beyond anyone outside of the company understands.

And if Tesla has indeed already begun working on a 12,000-ton Gigapress that would mean we are not too far off from seeing Tesla build the entire chassis of a vehicle in one piece.

As of now, it’s not yet clear which vehicle Tesla has chosen to initially use the 12,000-ton Gigapress. Speculations range from the upcoming $25,000 compact car to the Tesla Semi.

However, no matter which Tesla ends up being the first vehicle to have its entire chassis made as a single piece, it will undoubtedly be a seminal moment in the world of automotive manufacturing.

The idea that in the near future Tesla will be able to build an entire vehicle out of a single piece of metal is truly exhilarating. My mind fills with excitement just thinking about the possibilities. However, these are only the initial leaks and we still have so much to learn.

Related news: Tesla Worker Efficiency Has VW On the Ropes

For example, if such a vehicle is involved in an accident, what would it mean for reparability. Also, what sorts of new capabilities and financial savings will building a vehicle in one piece unlock? Does Tesla plan to eventually build all vehicles out of a single-piece chassis? These are all questions that need to be answered.

We will be sure to keep you posted as more information comes out. Make sure to visit our site torquenews.com/Tesla regularly for the latest updates.

So what do you think? Excited about the new 12,000-ton Gigapress Tesla is building? Which vehicle do you think will be the first Tesla to use this machine? Let me know your thoughts down in the comments below.

For more information check out: Elon Musk Considers Introducing A New Color For Tesla Vehicles Also, see Why You Would Seldom Need a Brake Pad Replacement in Tesla Models: the Wonders of Regenerative Braking

LG's New EV Battery Plant Is a Welcome News for Tesla
Tesla Giga Berlin's New Hurdle: It's Not Only the Gov't, but Now Tesla Itself
END_OF_DOCUMENT_TOKEN_TO_BE_REPLACED