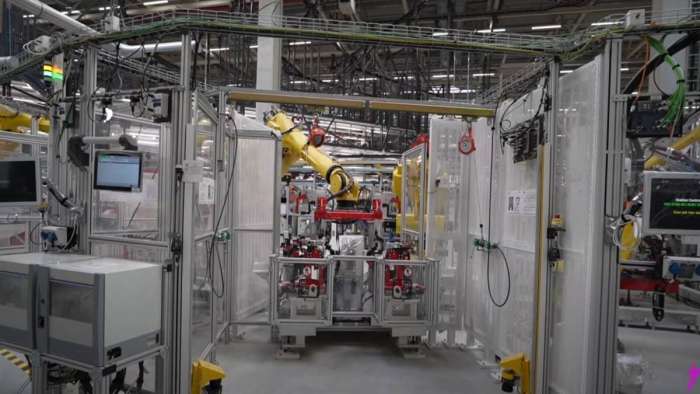 We just saw a Giga Belrin factory tour today from the YouTube user, HyperChange. It was very impressive and the sheer amount of stuff going on in the factory astounds. Let's go over what we saw.
Advertisement

Thanks to HyperChange, we have a tour of the Giga Berlin factory from there recent grand tour. Let's take a look!

Inside the Entrance of Giga Berlin

The first things found in Giga Berlin was various robots doing what appeared to be dances, showing off their ability to move. These weren't humanoid robots, like the Tesla Bot, but were instead large robots with robot arms, hands, and claws, in order to grasp and move things around. HyperChange took a selfie with a robot behind him.

There was also a lot of information about the Tesla vehicles themselves, for instance, the Model Y is the most energy efficient vehicle in the world. There was a sign to always remember the mission to transition the world to sustainable energy. The Model Y battery maintains 90% capacity after 300,000 miles.

Next up was a robot arm drawing a car on a white board. This car was most likely the Model Y that will be produced at Giga Berlin.

Turning the corner to the Giga Presses

Inside the Giga Press area, you could hear large machinery working and see sections where different pieces of vehicles were being pressed and moved around. You could see multiple windows of this working and it was like clockwork and an assembly line functioning in unison.

One of the pressed pieces for the vehicle was a very large piece. There was another portion of the vehicle on another table. Tesla was showing off the different pieces of the Model Y that get stamped using the Giga Press. The real innovation is the die casting process - the entire underbody of the car being created in one piece and the liquid material that is used.

There was a hung by string rendition of the stamped pieces of the car for the area HyperChange was in to show what those pieces were used for. Fremont was Tesla's first factory, which was abandoned by Honda and Toyota. Tesla has innovated on the Giga Berlin factory and improved on the processes that were being done in the Fremont factory.

For building the car body, Tesla had a sign that said this: Our team is supported by an army of robots that weld, rivet, and glue the car parts together. With highly precise and fast movements, we produce 1 car body every 45 seconds.

The stamping process is very impressive!

Once all the car parts are stamped and ready to be put together, they are run through an assembly line of robots. HyperChange showed the pieces of a Model Y pieced together being moved by a single robot. It was doing some serious heavy lifting!

Giga Berlin is going to have a custom paint shop and Tesla has developed exciting colors that give the car body its unique appearance. Layers that are thinner than a human hair form a skin to protect and beautify Tesla's car.

In the paint shop, the car frame can be seen being dipped into a large pool of what appears to be a paint-like substance. There is then a line the car goes through to have the painting done on it.

Tesla also has a very rigorous quality control system to do their best to make sure there are no problems with the vehicles.

Die Casting the Under Body of the Car

There was a sign in the casting area that said this: We produce the 2 biggest parts for the car body by injecting molten aluminum in a high-pressure mold and pressing it into a durable shape.

The Giga cast is a huge innovation at Giga Berlin. The die casting machine was enormous. There will be 8 total once Tesla has all the machines they need.

There was a video of the casting, showing the die going into the machine and forming the piece of the car they need. The machine reduced 78 parts per car and reduces costs by 40%. Tesla is always innovating in processes, costs, efficiency, and more.

Tesla has a major manufacturing advantage!

Tesla is producing new headlights for the Model Y in Giga Berlin. They also make their own seats in-house. HyperChange says these are the most comfy seats you will ever sit in for a car.

There was a sign for the 4680 battery cells. Tesla said they can produce 1 million cells a day.

There was also a gear box and motors section showing the motors that the Model Y would use.

Lastly, there was the FSD computer - the full self-driving computer that helps Tesla vehicles drive themselves.

There was a Model Y Easter Egg of a half covered Model Y to tease the shiny and glossy look for the paint job.

Thanks HyperChange for showing us Giga Berlin!

What did you think of Giga Berlin? Is it going to make a big change for Tesla? Can any other auto makers keep up?