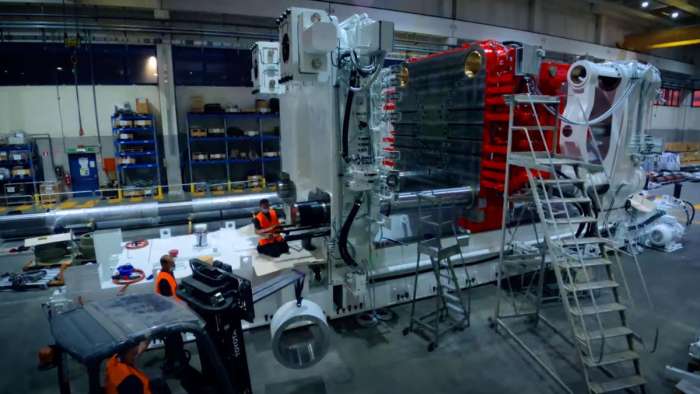 We have news that Idra, the manufacturer of the Giga Press for Tesla, is set to release a documentary. It will be a 10 part series called "Giga Press Uncovered". The first episode will air on Monday October 4th, 2021.
Advertisement

The trailer for the 1st season of "Giga Press Uncovered" by the Idra Group, shows their Giga Press, a giant casting machine used to make frames of vehicles. You see many different angles of the giga press and see it being lowered to the ground.

A member of Idra says: "Big is only a side effect of what we want to realize."

More and more usages of the Giga Press can be seen as well as the massive scale of even one Giga Press and just how big it is compared to other people around it.

I can't wait for this documentary to begin and will definitely be watching AND covering the news on it. I also took a look around Idra Group's YouTube channel and discovered some things.

The Idra Group is not very well known yet, with only 2.27K subscribers on YouTube and an average view count somewhere between 300 to 800 views on the low end and a few videos that got over 30K views.

I think the Idra Group and their Giga Press are going to start getting very well known as manufacturers of electric vehicles realize that they are going to need to scale at mass production quickly in order to compete - just like Tesla is.

Shipping Time and Costs for the Giga Press

I learned that the shipping times for the Giga Press are not immediate. The Giga Press needs to be disassembled and packed together, which takes a couple weeks. The parts also need to be packed with special materials to preserve the Giga Press.

To ship a Giga Press oversees, Idra filled 12 open top 40 foot containers and 12 self supporting independent cases. The weight was between 3.5 and 70 tons for each of the packages. To ship oversees requires very special packaging by boat. To ship to Europe without a boat still requires large trucks and special care. The longest shipments are intercontinental and take between 16 days (New York) and 24 days (Houston) and 45 days (China).

The Giga Press is reassembled in about a month on site. That is a massive machine!

I learned that the costs for the Giga Press are considerable. The costs of shipping are between 10 to 15 percent of the total cost of the Giga Press. I haven't been able to find the exact cost of a Giga Press, but I'm certain it's not cheap. Imagine building a machine that presses 7 tons and shipping it...

How the Giga Press Works

The Idra Giga Press is a marvelous machine. I watched a video about the Xpress 700, one of Idra Groups Giga Press machines.

There is a high performance Idra injection system. There is a strong and reliable mechanical structure. There is a rigid toggle system, allowing for flexibility within the machine. There is a high efficiency hydraulic system, powered with a servo motor for energy saving. There is flexible peripheral integration and a turn-key die casting cell.

It was really cool to see the robots working within the machine. A robot takes liquid and pours it, getting ready to start the die casting, along with many other parts working in tandem to produce a very efficient and gigantic machine.

Here is the full video:

What do you think of Idra's Giga Press? Is this the best machine available on the market to mass produce vehicles? Are there any competitors? Will Tesla ever make their own Giga Press?