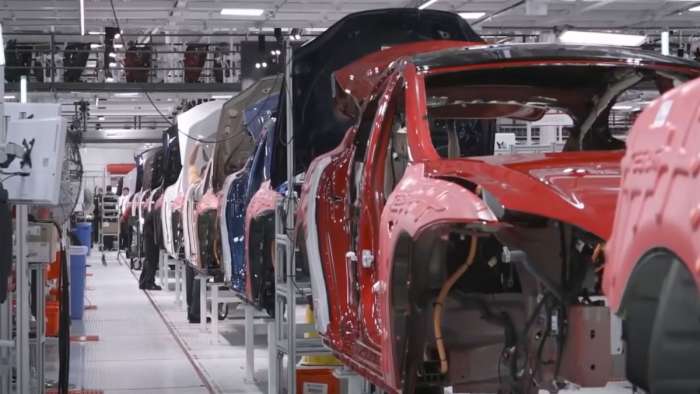 Elon Musk just replied to a Tweet with a statement that sums up why Tesla is so far ahead of other auto makers whether they be gas or electric powered. Tesla has superior manufacturing. A Tesla Model 3 is made over 3 times as fast as a Volkswagen ID.3.
Advertisement

Tesla has a huge manufacturing advantage and most other auto makers are too "asleep at the wheel" to realize this - and they won't until it's too late.

I will paraphrase what was heard about the VW group and share some of my conclusions afterward. This was according to various BI sources:

Diess stated that compared to Tesla and Chinese manufacturers VW is too expensive, slow and with low productivity not competitive

According to BI sources Herbert Diess and Brand CEO Ralf Brandstätter called a crisis meeting with all 120 top managers at the company, on Thursday, 8/30/2021.

Compared to Tesla and Chinese manufacturers VW is too expensive, slow, unproductive, and not competitive.

We need to take up the "fight against Grünheide"

If everything remains as it is, VW will no longer be competitive.

We have a great responsibility for this site. We have to embrace the new competition.

It is urgently necessary that a new course is set in Wolfsburg. Future competition with Tesla's new Giga factory will be brutal. The electric car pioneer sets new standards in car production.

A Model 3 is built in 10 hours, more than 3 times as fast as a VW ID.3 in Zwickau. This puts Tesla in another dimension in terms of productivity and profitability.

We need a will to live and a jolt at the site.

Trinity has to take the site to a new competitive level, has to revolutionize it. Also with new processes.

Note, the board says the designs for the project so far don't go far enough.

In the end, it's also about the jobs we have here. Mr. Diess or the Supervisory Board or the employee representatives don't decide about the jobs. It is the customer who decides, and the customer buys the product that offers more quality, more features for a better price.

That's why we have to take up the fight, attack and not let Grünheide ruin our location.

There's something very true about life, progress, and getting results. And that is whatever you incentivize will happen.

What is the incentive for Diess, the CEO of VW, and the members and managers of Volkswagen to innovate with extreme urgency? I would argue that there is no incentive in place, or they would be doing it right now. There isn't enough of a reward in place to cause change.

The same goes with other auto makers. If there was really an incentive to innovate and high rewards for doing so, then those companies would be doing it.

There is a reason Elon Musk is delivering and is getting such large options of stock based on performance goals related to Tesla growing its market cap, revenue, profits, etc... Because if he succeeds in doing so, he gets rewarded. It's a very simple system.

I highly doubt that any other CEO of any other auto company has a rewards package with stated goals of growth and market cap like Elon Musk does. It's one of the many things being done differently by Elon Musk and Tesla.

What about when newer Giga factories come online and the $25K Tesla Model 2 is released?

I've been reading articles about VW's plan to overtake Tesla in 2026 with a project called Trinity. Well, where is it? Where will Tesla be in 2026? What are the odds that somehow, VW just magically leapfrogs Tesla, when the only game in town is electric vehicles?

Tesla will continue to improve manufacturing because that is their culture. They innovate with extreme urgency and no other company can keep up.

What do you think about Tesla's manufacturing - do they have an advantage? Is Elon Musk's compensation package the reason Tesla is successful?