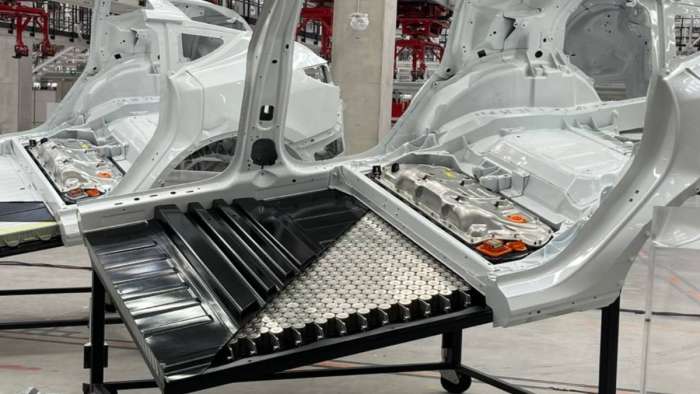 We see the 4680 batteries spotted at Giga Berlin according to Tesla subreddit u/geniuzdesign. This is exciting news. Elon Musk is also speaking at Giga Berlin. Let's see what's going on here!
Advertisement

If you pay attention to the Twitter account for Elon Musk's jet, you can see that he landed in Berlin yesterday, 10/8/2021, and it looks like the reason is to kickoff the grand tour and soon to be production for Giga Berlin!

Elon Musk made a joke that Tesla would replant any trees cut down to build the plant. The 4680 structural battery pack which was spotted and is now being circulated across the internet.

Elon Musk was asked about Tesla Bot, and he responded that Optimus Sub-Prime is being worked on and it should be interested to see what comes of that.

Elon Musk said that they will have a kindergarten/day care at the Giga Berlin factory or a garden for children. He said that he would make sure families were taken care of.

Elon Musk wants to replace 1% of the global vehicle fleet per year and reach 20 million cars produced a year. He doesn't want to talk to much about future products except to say that they are really exciting.

Elon Musk was asked about solar roof coming to Germany and he said that hopefully next year the solar roof would come to Germany.

Elon Musk was asked about cell production. He said that in the future, most cells will be iron based. He sees batteries as being very sustainable since they are practically infinitely recyclable. Nickel is more difficult to mine more than iron. Nickel will be used a lot for long range cars and aircraft. Iron for shorter ranged/smaller vehicles. There's really no worry in resources for batteries and sustainability.

Cell phones and laptops use cobalt which is more challenging.

There are two new paint colors at Giga Berlin, a crimson read color, and a new blue, to add to the colors to customize a Model Y with.

What do you think about Elon Musk speaking at Giga Berlin? Were there any surprises? Will they start production in December, 2021?

DeanMcManis wrote on October 11, 2021 - 10:44am Permalink
It is good news seeing the 4680 batteries in a Model Y structural pack. I think that the revised European Model Y will actually ship with the 4680 batteries coming from the Fremont battery factory until the much larger 4680 battery factories in Germany and Texas get finished and start to ramp up mass production next year.