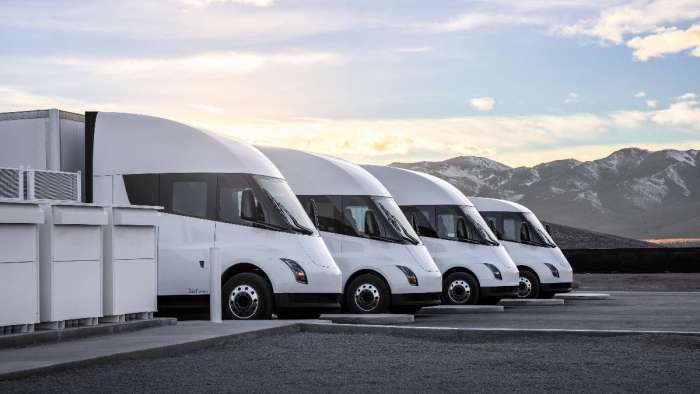 Tesla first unveiled the Semi back in 2017 with deliveries expected to begin in 2019. However, after years of delay, today, Elon Musk has confirmed that the 500-mile version of the Tesla Semi will start "shipping this year."
Advertisement

Tesla first unveiled the company’s all-electric 18-wheeler called Tesla Semi back in December 2017. At the unveiling event, Tesla showed off two versions of the vehicle – one for shorter trips with 300 miles range, and another for long-haul trucking with 500 miles range.

Even more impressively, Tesla said the range was calculated with the vehicle loaded to its max with a combined vehicle and cargo weight of 80,000lbs.

In addition to the range, the Tesla Semi also featured an incredible 0 to 60 time of 5 seconds without any cargo and 20 seconds 0 to 60 time loaded to the maximum and weighing 80,000lbs.

When it comes to design, the Tesla Semi also features a unique aerodynamic exterior and an equally unorthodox interior with a center-mounted seat and with 2 screens on either side of the driver.

Given these features, the Tesla Semi is universally lauded for its design, range, and performance. And currently, the vehicle has amassed a long waitlist with customers eagerly awaiting the start of deliveries.

When Tesla first showed off the Semi at an unveiling event held back in December 2017, the EV maker said initial deliveries will begin in 2019. However, 3 years after the 2019 deadline, Tesla is yet to deliver a single vehicle to customers.

There are a couple of main reasons for the delay. First is the COVID-19 pandemic caused supply chain disruption. The pandemic not only has delayed the Tesla Semi but, has also affected Tesla’s other products and all manufactured goods all around the world.

However, on top of the pandemic, Tesla, together with all EV manufacturers, is also facing battery constraints. And according to Tesla, since the company only has a limited number of batteries, starting the Semi production will mean having to cut back the output of the company's well-performing vehicles like the Model 3 and Model Y.

Nevertheless, after years of delays, Tesla seems to have addressed many of the issues holding back the Semi’s production and the company looks set to begin production of the all-electric 18-wheeler.

Although 5 years is a long time to wait for a product, this is nonetheless incredible news for the several customers eagerly awaiting the release of the Tesla semi.

In addition, Tesla has used the extra time to test the vehicle thoroughly by using the handful of prototypes out on the road to deliver to the company’s vehicles. This means, that even though the wait was long, customers will undoubtedly be receiving an overall better vehicle than that was shown off back in 2017.

Currently, although Musk has promised the Semi will begin deliveries later this year, the Tesla CEO hasn’t yet shared the exact date and what kind of production numbers we can expect. However, we will be sure to keep you posted once we learn more about Tesla’s plans.

So what do you think? Excited to learn that Tesla will finally start delivering the Semi? Also, what kind of improvements do you think Tesla has implemented given the 3-year delay? Let me know your thoughts in the comments below.

For more information check out: A Truthful Review of the 2022 Tesla Model S Plaid

Tesla Contemplates A New Strategy for China Retail even As Sales Boom
Jay Leno on Elon Musk & EVs: “I Think He Should Get ... Credit"
END_OF_DOCUMENT_TOKEN_TO_BE_REPLACED