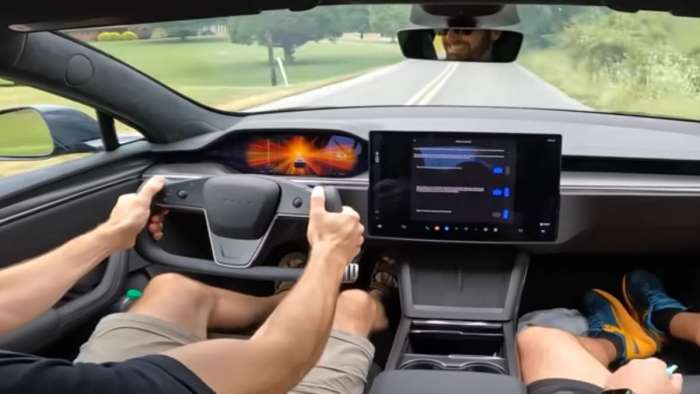 A Truthful Review of the 2022 Tesla Model S Plaid

There is a review from RegularCars about the Tesla Model S Plaid and it shows that the vehicle is one of the fastest vehicles on the road - and nobody will want to race you if they see you in one.
Advertisement

A Truthful Review of the 2022 Tesla Model S Plaid

In 2022, if you are driving a Tesla, nobody is going to race you - especially if it's a Tesla Model S Plaid. This owner would catch eyes with other gas sports cars and they would not even look at him.

David, from RegularCars, the owner of the Tesla Model S Plaid recounts the time of pulling up next to an Evo car, rolling down his window, and asking to race. The other owner simple said, "Nah." In 2022, you can get a Tesla Model S Plaid that goes 0 to 60 mph in 2 seconds. Electric cars are no longer novelties. They are becoming the best cars out there - at least for Tesla.

There are many gas cars and owners that are still unwilling to make the transition to electric vehicles. You can spend $150,000 and get all the add-ons to a gas car and then you could beat a Tesla Model S Plaid. But, it will take a lot of work.

When this Tesla Model S Plaid went into launch mode, he said his vision blurred. He could literally not see clearly what was in front of him. It was as if he was entering warp speed and everything was zipping past him.

Electric cars are now on the trend to becoming the standard for vehicles. It may not seem like it now, but the exponential growth trends show us that by 2030, the majority of vehicles will be electric.

A Tesla Model S Plaid can reach 216 miles per hour. This is unprecedented for an electric vehicle. This vehicle is an American built machine with straight-line power on the level of two Camaros just smashed together.

The car is very tech-forward. Even with all this tech, the car is blindingly fast. Until the Cybertruck is released, the Tesla Model S Plaid is the flagship car for Tesla. Elon Musk seems to have figured out the formula for American success. People just want to go fast.

I would also add that you have to be able to mass produce the vehicle. Also, the owner of this car says that anyone under 25 or over 65 should not drive the car. You almost need a new kind of permit in order to drive this vehicle. Because of its high speed, a lot can go wrong without taking care.

The car also comes with a yoke steering wheel. It takes some getting used to. Most controls are on the main screen or are on the yoke - everything is simplified.

What do you think of the Tesla Model S Plaid? Is this Tesla's flag ship vehicle?

Tesla Contemplates A New Strategy for China Retail even As Sales Boom
Jay Leno on Elon Musk & EVs: “I Think He Should Get ... Credit"
END_OF_DOCUMENT_TOKEN_TO_BE_REPLACED