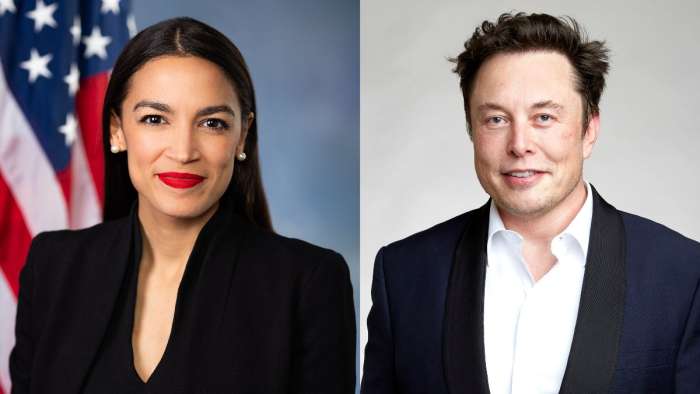 The Democratic party and Elon Musk have been going through a rough patch as of late. And now, in response to Representative Alexandria Ocasio-Cortez's decision to replace her Tesla Model 3 with a union-built EV, Musk has responded by insinuating she is a puppet for unions.
Advertisement

In the 2020 elections, the Democrats won both houses of Congress and the presidency. At the time, the party most vocal about climate change taking power was thought to be favorable to Tesla as the EV maker is the leading producer of sustainable products.

At the time, the EV summit attendees included executives from General Motors, Ford, United Auto workers, as well as Stellantis, the company formed by the merger of Fiat Chrysler and France's PSA. During the Summit President Biden congratulated GM CEO Marry Barra for leading the transition to electric vehicles.

To highlight the absurdity of this statement, in the first 3 months of 2022, GM only delivered 457 electric vehicles worldwide. In comparison, in the same time frame, Tesla has delivered over 300,000 EVs and accounted for more than 70% of EVs sold in the US.

Following Tesla’s snub, relations between the EV maker and the Democrats went downhill even further, as Democrats in Congress introduced a new EV incentive bill.

According to the new bill, Tesla buyers would get an $8,000 federal EV incentive while Ford and GM will get an additional $4,000 for building their EVs in unionized factories.

However, the worst escalation between the democrats and Elon Musk/Tesla came after Musk announced his intention to buy Twitter and restore free speech on the social media platform.

Following Musk’s announcement, attacks by Democrats on the billionaire started to escalate. Last week Musk was accused of sexual misconduct, which the Tesla CEO has called a politically motivated attack by Democrats.

And most recently, Congresswoman Alexandria Ocasio-Cortez (AOC), representing New York’s 14th district announced that she wants to Replace her white Tesla Model 3 to get another EV made in a unionized factory.

In an interview with Bloomberg, Ocasio-Cortez explained why she bought a Tesla in 2020 saying “at the time, it was the only EV that could get me from New York to Washington on like one, or one-and-a-half charges,” finally the representative added, “I would love to switch.”

And a few hours ago a Twitter user informed Musk of Ocasio-Cortez’s decision to replace her Tesla, in response Musk wrote “the degree to which the unions control the Dems is insane. It’s like watching a sock puppet “talk”, but the hand inside the sock is way too obvious!”

The degree to which the unions control the Dems is insane. It’s like watching a sock puppet “talk”, but the hand inside the sock is way too obvious!

Related News: Indonesia Could Have Tesla's Next Gigafactory, Though No Official Announcement Yet

After the polls, Musk wrote to representative Ocasio-Cortez saying “I dare you to run the same poll with your followers”. A Twitter user then responded to Musk’s tweet asking “are you picking on her cause she said she wants to switch from Tesla to another EV. Musk simply responded with an eye and smiley face emoji.

As of writing, AOC has yet to respond to Musk’s tweets. However, we will be sure to keep you updated as the story unfolds. Until then, make sure to visit our site torquenews.com/Tesla regularly for the latest updates.

So what do you think? Disappointed to learn AOC, who is a champion of clean energy, is abandoning Tesla? Also, what do you think about Musk’s response calling her a puppet for unions? Let me know your thoughts in the comments below.

For more information check out: Tesla Is Expanding Giga Berlin on a New 250 Acre Land

John Goreham wrote on May 27, 2022 - 2:58pm Permalink
Union-built USA-soil-built BEV available for purchase today? Hmm. Maybe a Bolt if they are actually back on the market after their year-long vacation. That's it, right? Maybe AOC should consider the train. I think Amtrak runs from NYC to DC, and I assume it is union-operated. Of course, Amtrack uses fossil fuels to power the train...
Scott Ulrich wrote on May 27, 2022 - 4:11pm Permalink
Uhhh, Ford F-150 Lightning?
Marlon wrote on June 14, 2022 - 3:56pm Permalink
Ford put a stop to sales due to a serious defect, mostly, they're being Found On Road Dead, immobile unable to help Tesla owners as Ford's president so eloquently put it. LOL.
David wrote on May 27, 2022 - 8:10pm Permalink
I will never buy a union made EV. Based upon years of the American made car it is obvious it will have to be subsidized by the government to make it affordable and you will have to buy Chinese made batteries, not really made in America.
Crystal wrote on May 27, 2022 - 3:33pm Permalink
Simply TEAM MUSK… unions suck… they don’t do much for their members and are certainly destructive to the country… Additionally, Tesla is hands-down the best electric car out there. AOC will find out the hard way when she’s forced to drive around in a piece of junk.
Scott Ulrich wrote on May 27, 2022 - 4:02pm Permalink
Consumers are free to choose whatever product best meets there needs. It is highly childish and unprofessional for the CEO of any company to disparage people for exercising their freedom to choose a product. Also, the way the question is worded implies that by choosing anything other than Tesla she is somehow a hypocrite. She indicated that she wanted an EV to replace the Tesla. I think that still qualifies as championing green energy. There is nothing wrong with choosing a product because it supports a cause you believe in (in this case union labor). Perhaps Tesla’s CEO should be a little more introspective.
Scott Bauer wrote on May 27, 2022 - 7:26pm Permalink
You are 100% correct Elon musk demorats are the true reason that unions exist to line their pockets. My dad was in the Chemical worker's union over 40 years. Went on strike in the 70s no unemployment no benefits as a family of 5 single income family it was totally bullshit. Unions destroy industries. Keep up your fight Elon musk.
Pericles wrote on May 28, 2022 - 4:18am Permalink
AOC and the whole gang of idiots has done nothing but found all the other idiots who dance around their stupidity. These folks hasn’t and will never create anything of value. They push the middle and the poor class further down the misery lane. They don’t have 1/10000000000000th of the brain that Musk and others who create and invent!
Dan wrote on May 28, 2022 - 6:51pm Permalink
I have a got me great deal of respect for Elon Musk he's a true patriot and also a phenomenal entrepreneur . I work for and entrepreneur most of my career in engineering and with these great people like Elon or my boss would roll their shirt sleeves up and help you with projects they weren't afraid to get dirty they weren't afraid to answer your questions to make you a better employee and make a better company my hats off to Elon Musk
Mike Hicks wrote on May 28, 2022 - 10:57am Permalink
Democrat politicians are in bed with unions because union leaders are Democrat politicians
Mike Hicks wrote on May 28, 2022 - 10:59am Permalink
Democrat politicians are in bed with unions because union leaders are Democrat politicians
William Mcgrath wrote on May 28, 2022 - 1:38pm Permalink
if electric vehicles are so great why do they need to bribe the buyer with taxpayer dollors,as for the unions what is their take of this scam.
Dude wrote on May 28, 2022 - 3:13pm Permalink
I left a union job..the best decision of my life..except for the health plan..
Carol Dencker wrote on May 28, 2022 - 8:53pm Permalink
Chuckle. Sounds like Musk wants to date AOC…..
Carol Ann Columbare wrote on June 1, 2022 - 6:20pm Permalink
AOC is just an over paid Waitress in the White House carrying Nancy Pelosis water. She has to be one of our dumbest House members we have ever had. If you have ever watched one of her online FB videos, you most definitely walk away dumber than you were before. DUH!