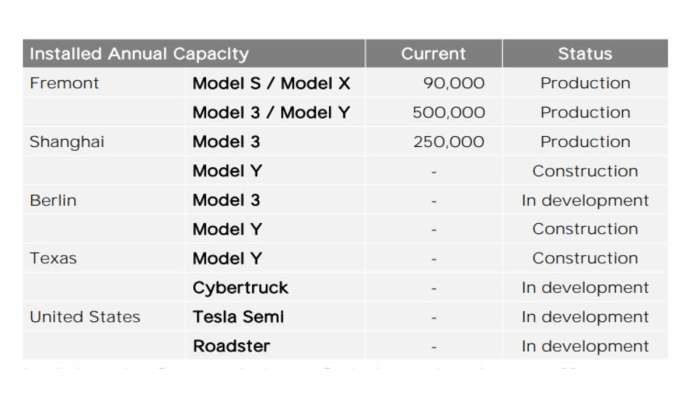 In this article, I'll review the news from the 3Q Shareholder's Letter and Tesla Earnings Call and discuss how Tesla plans to grow its business as no automaker has before.
Advertisement

Tesla is setup to quadruple sales over the next 3 years

For Tesla to take sales from 500,000 cars this year to 2 million a year in 2023, they need to expand supply and ensure demand for their cars. What is surprising is they don't really need any new products to get there. Let's look at their 4 plants.

So by 2023, they not only have the capacity to build 2 million vehicles, but they have ensured that they are innovating, so they should be able to reduce the price of all their vehicles by about $8,000, gradually over the 3 years (4 small $2,000 cuts). In this time, gas and diesel cars from competitors will go up about $3,000 (car prices have been going up about 3% or $1,000 a year). For example, a Toyota Camry starts at about $24K today and a fully loaded version is about $39K. The Tesla Model 3 starts at about $38K and goes to about $60K (without FSD). Even today, the Model 3 competes well with the Camry in the total cost of ownership. With the Camry predicted to cost $27K to $43K and the Model 3 predicted to cost $30K to $50K in 2023, it's easy to see more people choosing the Model 3, with similar purchase prices, vastly better ownership costs, and far better driving performance. This brings Tesla down from the entry-level luxury market to the mainstream market, greatly expanding their addressable market. So an affordable ($35,000) electric crossover and an even more affordable ($30,000) sedan available in the 3 major markets (US, China and Europe) are all Tesla needs to sell 2 million cars.Telsa will also have the Cybertruck, Model S, Model X, and Roadster, but none of those will sell near the volume of the Model 3 or Y. BMW, by contrast, produces 14 models to sell a similar number of cars.