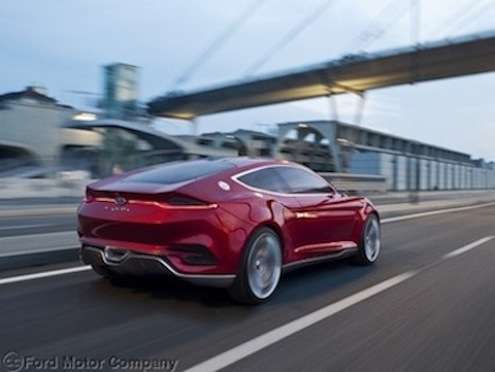 The 2015 Ford Mustang won’t be called by the old S197 platform, but will receive a new designation to go along with the extensive changes coming for the new global pony car.
Advertisement

When Ford unveils the all-new 2015 Ford Mustang, it will be a new global car unlike anything we’ve ever seen before. And the old platform which was called S197 by Ford will go into the history books forever. MustangsDaily has learned “from an anonymous inside source,” that Ford will change the platform name and will be called the S550 platform by Ford. Why is this significant? All the changes in the last few years to the Ford Mustang have seen the American car undergo changes in drivetrains and some design changes, but nothing compared to what the 2015 Mustang will undergo.

Ford will launch the next-generation Ford Mustang on a global level and it will need to appeal to whole new buyer. Gone will be the days when the Ford Mustang will just need to go fast in a straight line. The changes to the 2015 Ford Mustang will be so significant, that a new designation is required. This will only be the fifth time in the Mustang’s 50 year history that the designation has changed. While we already new significant changes were coming for the 2015 model, this signals the fact that the new 2015 Ford Mustang is going to be a new global car that is very different from what we have seen in the past.

Ford has a new global strategy

Ford’s new strategy for the Ford Mustang will include making those here in the U.S. who grew up with the pony car happy with the new two-door coupe. But it will be also be sold in Europe and around the globe for the first time. Ford is making huge strides around the globe and has some of the most popular cars in Europe with the new Ford Fiesta leading the way. The new compact car is the best selling car in Europe and Ford has done it by offering smaller, lighter and more fuel efficient models including the Ford Focus.

Look for the new 2015 Ford Mustang to follow in this new global pattern of light, fast, fuel-efficient Ford cars. It will start on the outside as Ford has hinted that the next-gen Mustang will look very different than the current retro-styling. We reported here last year that the 2015 Mustang could receive similar styling and look much like the Ford Evos Concept car pictured above that made its world debut at the 2011 Frankfurt Motor Show. While we don’t know that for sure, we do know the new Mustang will undergo some major exterior styling changes. Ford’s Chief Creative Officer J Mays has said that the design “will be less retro and bring the brand forward.”

Underneath, the next generation pony car will receive major improvements and the old straight axel will be gone and replaced with a new rear independent suspension. A solid rear axle which is fine for going fast in a straight line down a drag strip, but the new global 2015 Ford Mustang will be sold around the world to a whole new buyer. The new independent rear axle set-up will be more responsive and improve the driving dynamics and appeal to the European buyer.

The future is already here

Also set to help revolutionize the 2015 Mustang will likely be a direct-injected EcoBoost turbocharged 2.0-liter four-cylinder engine. The new engine will allow the 2015 Ford Mustang to offer outstanding performance and be fuel-efficient. Ford is already having much success with the small EcoBoost engines in Europe, and it’s ready to make its way under the hood of the 2015 Mustang. Shelby American just introduced a new Shelby Focus ST in Detroit with a EcoBoost 252 horsepower turbocharged four-cylinder powerplant.

Gary Patterson who is the vice president and leads the sales and customer service operations at Shelby American told us late last year the, “2013 will be a big year for Shelby as we unveil projects in Detroit and in New York- so get ready! Carroll Shelby also gave us an idea of things to come for the Ford Mustang. he said, “I think you're going to see the industry going completely to small engines with turbochargers. That's the only way you can get the mileage that the government is going to be demanding.”

What is the future of the next-generation 2015 Ford Mustang? The new pony car will appeal to a global buyer and will be lighter, offer better handling and come with a smaller turbocharged engine that will meet the new emissions and fuel mileage standards around the globe.