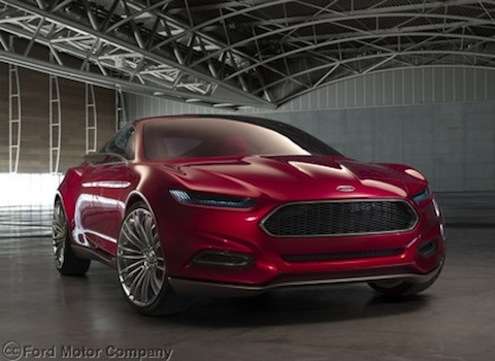 2015 Ford Mustang may not look like the Evos concept

There has been wide speculation that the next-generation 2015 Ford Mustang will resemble the Evos concept, but that could all change.
Advertisement

While we do have some information on the next-generation 2015 Ford Mustang, it has been rumored that the global ponycar would resemble the Evos concept that made its debut at the Frankfurt Motor Show last year. But a report by Autoweek says the new design may not look like anything like the Evos. And it would make sense because the appearance of the new 2013 Ford Fusion already has some of the Evos design cues. Why would Ford launch the new Mustang on a global scale and not come up with a completely new design?

The old retro styling of the current-generation Mustang has good appeal here in North America, but as Ford plans to launch the new-generation Stang worldwide, they know they need to go in a completely new styling direction. Buyers around the globe don’t have any nostalgic attachment to the Mustangs storied past. And Ford knows they will need to appeal to a whole new customer base if they want the new launch to be successful worldwide.

Ford has just launched the 2013 Ford Mustang in the Philippines in preparation for their dealers in Asia. And Ford is already exporting the new Mustang to Germany, France and the UK. Ford is being tight-lipped about the exterior styling of the new global Mustang, but we do have a few details about the new two-door coupe that will make its world debut in 2015.

We can count on the new global Stang being powered by a new Ford EcoBoost powerplant. This new 2.3-liter powerplant is already being developed to be the new base engine for the 2015 Ford Mustang. The new 2.3-liter engine is lighter, will produce more horsepower and be more fuel-efficient than the outgoing 3.7-liter V-6. The new EcoBoost engine will have all the latest technology and will definitely fit into the new global design. The 2015 Pony car will also likely be offered with a direct-injected EcoBoost turbocharged 2.0-liter four-cylinder engine. The new engine will allow the 2015 Ford Mustang to offer outstanding performance and be fuel-efficient.

For, 2015, we also know the new Ford Mustang will get even more new upgrades with an independent rear suspension set up. The old antiquated straight axle will be replaced with a more responsive independent rear axle set-up that will improve driving dynamics. This will have a broader global appeal for better ride quality and handling due to lower unsprung weight and the ability of each wheel to address the road independently of the other wheel.

Regardless of the exterior styling, look for the all-new 2015 Ford Mustang to be a legitimate global sports car with improved performance, new technology and fuel-efficiency.

Anonymous wrote on October 17, 2012 - 9:47pm Permalink
My big question is what platform will it be build on. Sounds like they nixed the new RWD falcon platform. Then I hear about the rear biased AWD on the new Fusion Titanium. Makes me wonder if they just shorted the new fusion platform and convert to RWD tied to a unique independent rear end. Then they could go with a rear biased AWD version sharing with the fusioin. As long as they can still get a V-8 in it for the GT I'd be OK with that.