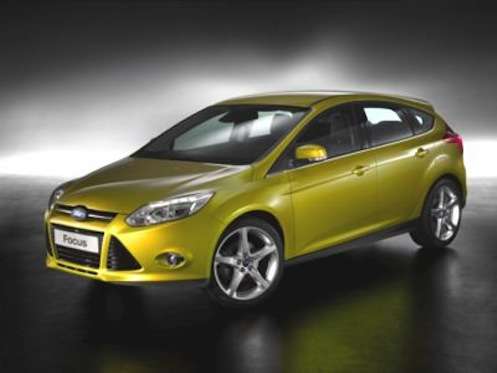 The all-new third generation Ford Focus RS will likely be powered by a new turbocharged 2.3-liter EcoBoost powerplant that will be pumping out 330 horsepower. At the launch of the 2013 Ford Focus ST, Auto Express reports that Matthias Ton who is the chief program engineer for the Focus ST and all of Ford’s global performance cars, said that the Focus ST with 252 horsepower, is at the limit of its performance potential. The only way to boost performance in the 2.0-liter OverBoost engine, would be to significantly upgrade its turbo and fuel-delivery system.

Ford is currently developing a 2.3-liter EcoBoost engine in North America that will likely power the next-generation Focus RS. Ton confirmed that a highly-tuned version of the engine with 330 horsepower would go into the new Focus RS if it is brought to production. With the highly successful recent launch of the 2013 Ford Focus ST, Ford is considering what to do the the RS model. The more powerful RS would need the new engine to differentiate itself from the ST model.

This could be the next-generation Mustang powerplant

But as Motor Authority has reported, this new 2.3-liter powerplant is being developed to be the new base engine that will go into the all-new global 2015 Ford Mustang. It is expected the be the engine that replaces the current 3.7-liter V-6 units found in entry-level Ford Mustangs in the US. The current heavier V-6 produces 305 horsepower and 280 lb. ft. of torque. The new 2.3-liter engine is lighter, will produce more horsepower and be more fuel-efficient.

The all-new 2.3-liter EcoBoost engine will also have 32 more horsepower than the current 2.5-litre five-cylinder turbo RS with its 301 horsepower. And it’s close to the Limited Edition RS500 that produces 345 hp. The new engine will definitely fit into the new global design for the 2015 Ford Mustang that will also get even more new upgrades with an independent rear suspension set up.

The new Focus RS will also get performance upgrades

Ford has plans to give the Focus RS even more performance oriented features to differentiate it from the Focus ST. It will get upgrades to the suspension with features like a mechanical limited slip differential, and a wider track for spirited track runs. The RS will also get bigger performance brakes and a stiffer suspension. It could also be outfitted with the ST’s Torque Steer Compensation system, or perhaps keep the current cars RevoKnucke front strut system to help reduce torque steer. An all-wheel-drive system to compete with German competition could aslo be a possibilty for the all-new Ford Focus RS.

With the launch of the new Ford Focus ST coming later this year, we may not see the next-generation Focus RS before 2015 if at all. But we can look forward to the 2015 Ford Mustang coming with a new updated engine

Anonymous wrote on June 22, 2012 - 11:24am Permalink
Much like the current base Mustang engine, this would also be a good base engine for other Ford vehicles, like the F-150, Flex or and setup up engine for the Taurus or Edge.