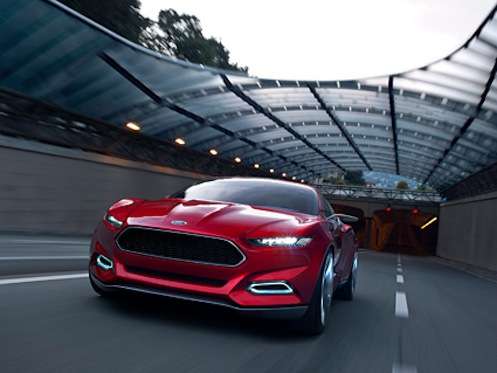 The next generation Ford Mustang coming in 2015 will need to appeal to a whole new world.
Advertisement

There are big changes coming in 2015 for the next generation Ford Mustang, and Ford is working on a design that will have global appeal. This new design will need to have an appeal that goes well beyond buyers in the U.S. Because Ford will be marketing the new generation 2015 Ford Mustang in a variety of new markets around the world, the Mustang will need to be accommodating to a whole new group of buyers.

The folks over at Inside Line have given us an idea of what that design will look like with an artists rendering of the front and rear view of the 2015 Mustang that they have taken from various sources. This could be a fairly accurate representation of what the new Mustang will look like, but Ford has not officially confirmed that. Ford Evos Concept that made its debut at the Frankfurt Motor Show last year was a preview of the future Mustang with a new global design.

We do know that the 2015 Ford Mustang will be marketed around the world and Ford is smart enough to know that buyers outside the U.S. aren’t attached to the old nostalgic look of the Mustang. They didn’t grow up with the pony car and won’t care if it continues on with the same styling. Ford knows the only way to appeal to a new global buyer, is to give them a new global car.

Even though Ford will be celebrating the Mustang’s 50th birthday when it comes out in 2015, look for a big departure from the current model. Not only will it get new exterior styling, but the new global car will weigh less, and also get a new more responsive independent rear axle set-up in place of the current straight axle. This will improve the driving dynamics and also appeal to the European buyer who is used to driving through the curves as opposed to a straight line down a drag strip.

American muscle cars haven’t fared very well in foreign markets, and Ford is gearing up for the changes needed to be successful around the world. They will need to walk a fine line between keeping enough of the Mustangs design heritage for buyers in North America, and also give it a totally new design to allow it to move into new global territory.

Under the hood, we will likely see some changes there also. Some of the current powerplants could carry over to the next generation Stang, but look for a direct-injection turbocharged four-cylinder engine to be introduced that will provide performance and improved fuel-mileage that the global market will demand. It is thought that the current 5.0-liter V-8 will be offered here in the U.S. to help keep buyers in the U.S. happy with performance levels.