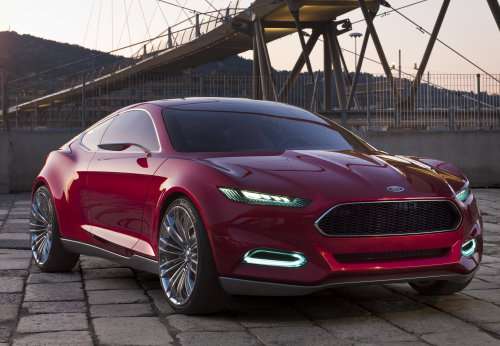 Ford Motor Company recently invited the media to Detroit for some seat time in the EcoBoost’d Ford Explorer and Edge but at a presentation prior to driving these new fuel-sipping SUVs, Ford Chief Creative Officer J Mays introduced the group to the new Ford EVOS Concept – the vehicle that will introduce the world to the future of Ford’s global design theme.
Advertisement

As you can see in the image on the right and in the gallery at the bottom of the forum, the new Ford EVOS Concept wears a striking new design theme – one that J Mays tells us will contribute to the future global design direction under their One Ford plan. This sleek Ford concept car combines room for four adults into a sporty fastback form with an overall shape that doesn’t look like something that far from production form. Sure, once the gigantic gullwing doors open to reveal the high tech interior it becomes very clear that this is strictly an auto show concept but the look of the EVOS Concept offers several key features that J Mays tells us we will see in the next generation of the company’s global design.

Across the front end, the Ford EVOS Concept wears a set of slim LED headlights – something which Mays says Ford will move towards in the coming years. He points out how huge modern headlight assemblies have gotten and how expensive they are to make for the automakers and how much more expensive they are to replace by consumers – while at the same time only a small portion of these large headlight assemblies actual contribute to improved visibility as they focus more on form than function. The long, thin headlights of the Ford EVOS Concept use high intensity LED technology to light the way with only minimal surface space taken up by the headlight assembly; while still looking great. These thin LED headlights have already made an appearance in the luxury segment but with the next generation of global styling, Ford plans to implement these minimalist headlights standard styling features. Not only is the new front end of the Ford EVOS Concept functional but it also looks great, with an aggressive scowl that bolsters the sporty spirit of the EVOS.

Next, J Mays pointed out the new raised location of the main grille opening on the Ford EVOS Concept. Many modern Ford models have multi-opening grilles to provide proper cooling with large lower openings and smaller upper openings and while this offers lots of cooling air to enter the engine bay, it also increases the coefficient of drag. This new design not only reduces the drag across the front of the car but Ford believes that the larger, higher grille opening gives the exterior design a more upscale look. If you consider some of today’s high end brands like Aston Martin, Bentley, Rolls Royce or BMW, the main front end opening is mounted higher so as Ford adds this design theme to their future models, they hope to offer a more upscale look across their entire lineup.

Out back, the Ford EVOS Concept continues the sporty theme with thin LED taillights and a large, centrally mounted exhaust tip tucked under the angular fastback design. In talking to J Mays, he told us that this new EVOS Concept will be between the size of a C and D segment vehicle so expect it to range between the Ford Focus and the Ford Fusion.

The overall form of the new Ford EVOS Concept just oozes sportiness, with the stout, fastback shape and long wheelbase combining with the sweeping body lines to create an incredibly sharp looking concept car. While the outlandish gullwing doors might be a little pricey for production, they will offer onlookers perfect access to check out the high tech interior with the red driver’s seat (the hot seat) instantly drawing the eye with a cockpit-like control layout putting everything within arm’s reach of the driver. The thin, sport inspired seats in the front and back are smallish to maximize the available interior space.

This is one great looking glimpse of the future of the Ford design direction and while little information is known about the drivetrain, we can expect plugin hybrid technology (similar to that offered in the upcoming Ford C-Max Energi) using state of the art lithium ion batteries. While we don’t have any idea yet as to what kind of power the Ford EVOS Concept will make with its high tech drivetrain, if the powerplant follows the sporty theme of the exterior, we can expect enough power to make the EVOS a fun to drive, yet responsibly fuel efficient vehicle.

The Ford EVOS Concept will make its formal debut on September 13th at the 2011 Frankfurt Motor Show in Germany. TorqueNews will bring you more information on this gorgeous new concept car as it becomes available!