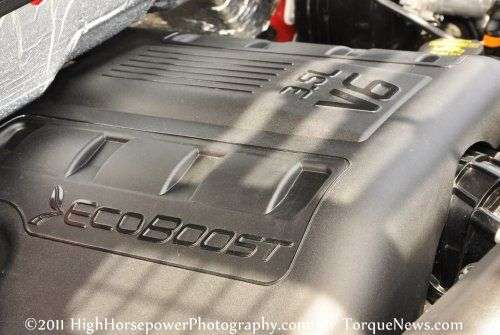 Recently I had a chance to spend 8 days behind the wheel of the 2011 Ford F150 FX4 with the innovative EcoBoost – the twin turbocharged V6 that Ford claims will beat the V8 competition – and after driving this high tech V6 there is no question why this has become the most popular engine option in the F150 lineup.
Advertisement

When Ford introduced the 2011 F150 with the EcoBoost engine, they did something that no other automaker had ever done – offering a twin turbocharged V6 engine in a pickup with the claims that it would beat V8 competitors and other engines in the F150 lineup. Ford has gone to great lengths to show the abuse that this new engine could take as many old school truck buyers raise their eyebrows at the suggestion of buying a truck to do REAL “truck stuff” with a V6 engine…but this is not your average V6 engine. Ford has used advanced turbocharging and direction injection technology to make this not just one of the most powerful engines in their lineup but also one of the most efficient. The EcoBoost V6 in this application makes 365 horsepower and 420lb-ft of torque – making it the premium engine option for the F150 with the exception of the 6.2L SVT V8.

That all looks great on paper but can the F150 with the EcoBoost V6 really go head to head with the big engines of the class? To find that out, I spent 8 days putting my F150 test truck through the paces; including towing, hauling, dealing with brutally rough unpaved roads in foul weather and regular urban daily driving. Ford is the bestselling truck in the market and the overall bestselling vehicle in the American auto industry so I don’t think that I need to talk about the exterior design and interior layout in detail but instead – I will take a look at the EcoBoost’s ability to do the things that truck owners need their truck to do and do well.

First thing first – fuel mileage of the 2011 Ford F150 FX4 EcoBoost. Ford is quick to point out that the EcoBoost is the most efficient non-hybrid truck on the market, offering 22mpg on the highway and 16 around town but that is in two wheel drive configuration. My test F150 was a 4x4, which is said to yield 15mpg around town, 21 on the open road and a combined average of 17mpg. During my first tank of gasoline, I ran the truck as hard as I do my tuned Hemi Ram with a 50/50 mix of city and highway driving…all with an empty bed (no tonneau) and no trailering. This includes highway driving where I was “keeping up” in the fast lane as well as testing the acceleration abilities of the EcoBoost F150 and over the course of that tank, I averaged almost 18mpg. Throughout the tank of 87 octane where I put about 100 miles of towing a two horse trailer (around 5,000lbs) and hauled 300lbs in the bed around 40 miles, I got 13.8 miles per gallon and I was pretty happy with that; as much of the unloaded driving during that tank was stop-and-go driving. Overall, I found that the actual mileage while unloaded exceeded the EPA numbers…and I have a pretty heavy right foot.

Next up, the drivability of the 2011 Ford F140 FX4 EcoBoost. The EcoBoost V6 is intended to go toe to toe with the biggest V8s in the class and with 360 horsepower, it is only slightly less powerful than the highest performance engines from Chevy, GMC and the Ram brand but with 420lb-ft of torque, the EcoBoost doesn’t need to make any apologies for that lack of horsepower. The Ford engineers did a fantastic job of developing the EcoBoost technology to make this twin turbocharged power without the “turbo lag” that can often plague high performance turbocharged engines. However, to someone who is not specifically looking for that lag, it won’t be detectable at all. In fact, I gave rides to a few friends who mistakenly thought that it was a V8 so to the average consumer the EcoBoost F150 seems like any other pickup. Whether you are launching hard from a stoplight or putting the hammer down while cruising on the highway – the 3.5L twin turbo V6 provides instant acceleration. As an interesting point, when you are rolling along at low speed and put the pedal to the metal, the turbos spool quickly and send all that torque to the wheels – enough to bark the tires at a roll. I also happened to find out that the EcoBoost F150 will very easily handle a Nissan Titan in a short sprint…just in case you are looking to buy your next truck to do some drag racing.

The 2011 Ford F150 FX4 trimline is an off-road package, featuring push button 4WD (it’s actually a knob) and Ford’s all wheel drive system is very user friendly and very capable. While the Detroit area isn’t chock full of places to test the off-roading capabilities of the EcoBoost F150; the area has had enough rain lately to turn some of the area’s unpaved roads into inches of mud with huge puddles – literally impassable to some smaller cars. There were very few situations where 4WD was needed but in some of the deeper, sloppier areas 4-high was more than enough to easily get out of the situation. As was the case during the on-road testing, the 3.5L EcoBoost V6 provided instant torque to dig through the ruts of the rough roads and the massive amounts of mud that we had to deal with had no impact on the engine as it ran ice cold through all of the mud. I have heard people question the ability of the EcoBoost to properly cool itself once that intercooler (which is mounted low behind the front fascia opening) or the radiator get muddy but the EcoBoost never missed a beat and none of the temperature gauges ever crept passed the midpoint.

Click here for part two of our 2011 Ford F150 FX4 EcoBoost review where we examine the towing and hauling performance of the engine option that has become one of America’s bestselling choices.

Check out the gallery below for a closer look at the 2011 Ford F150 FX4 EcoBoost or click here!