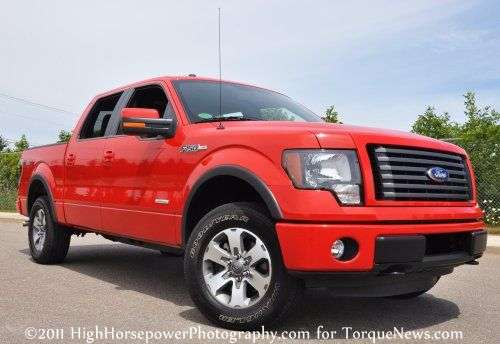 While it is great that the 2011 Ford F150 FX4 with the EcoBoost V6 makes big power and great fuel economy, the most important part of a truck’s job is hauling and towing.
Advertisement

One of the key concern from skeptics of Ford’s EcoBoost technology being applied to their bestselling pickup was that even though the 3.5L EcoBoost V6 makes great power, the fact that it uses forced induction to make that power could cause the 2011 F150 powered by this high tech engine to struggle when loaded down. Ford refutes that by boasting that the EcoBoost’d F150 has a towing capacity of over 11,000lbs and a payload capacity around 2,000lbs but how well does it handle all of that weight?

Like most consumers, I don’t have many needs to haul 2,000lbs but I did throw around 400lbs of bagged livestock bedding into the bed of the 2011 F150 EcoBoost to see how it handled some extra weight. This is vastly below the capabilities of the 2011 F150 in any form but once the bed was packed up, I found that the handling and ride quality of the truck wasn’t impacted by any noticeable amount. In all reality, the added payload didn’t have any effect on drivability and my EcoBoost’d test truck performed beautifully with the light load out back.

To test the towing capacity of my EcoBoost powered 2011 Ford F150, I hooked it up to a two-horse trailer that has a loaded weight around 5,000lbs. This is well below the max towing capacity of the truck but most light duty truck buyers don’t tow much more than that and a 5,000ln horse trailer was what I had sitting around for my testing procedures. I pulled this trailer around the area for about an hour on a 95 degree day, including both highway and city driving on paved and unpaved roads. My test F150 was not equipped with the integrated trailer brake so even though the horse trailer has brakes; we were stopping strictly on the brakes of the truck and at no point did that prove to be a problem.

When hooking up the 2011 F150 to the trailer, the rear view camera that is mounted in the tailgate broadcasting into the left side of the rear view mirror makes it incredible easy to hook up to the trailer. My test Ford truck was equipped with the trailer tow package which adds a 4 and 7 pin trailer connection under the rear bumper, next to the hitch receiver. My only complaint during hooking up to the trailer was the location of the safety chain hooks, as with an odd angle relative to the ground they were a little harder to access than a typical flat hook. Other than that, hooking up was smooth sailing so I set the truck into Tow/Haul mode and hit the road.

The primary concern around the EcoBoost by long time truck drivers who pull a trailer is that the turbochargers will take time to spool up, delaying the power needed to pull the trailer efficiently. This delay is commonly referred to as turbo lag and while it is only minimally noticeable when driving the F150 unloaded (the average consumer likely won’t notice it at all), turbo lag never seemed to be an issue when towing. When first pulling out onto the road with my EcoBoost’d F150 and the horse trailer, the Ford instantly offered enough torque to safely get up to speed and once I was driving around town, it became obvious that this truck really is capable of towing WAY more weight. At speeds of 35mph, it took no real effort from the EcoBoost V6 to pull the horse trailer – both pulling out from a stop and when accelerating while cruising.

Next, I headed out onto the highway to see how the 2011 Ford F150 EcoBoost pulled at higher speeds. Entering the highway into thick traffic, I was forced to merge into the 65mph traffic after entering on a tight cloverleaf on-ramp so I had to approach the highway around 30mph before climbing up to highway speeds. The EcoBoost very easily pulled the 5,000lb trailer from 30mph up to 65mph with no hesitation, allowing me to settle safely into traffic. The fact that I was pulling live animals combined with good sense prevented me from traveling above the posted speed limits but in a few occasions where I had to step out of my traffic lane and speed up to pass slower traffic, the EcoBoost once again performed brilliantly – dare I say – just like a V8. At no point in my trailering experience did I find the EcoBoost struggling and while I was towing well under the capacity of the truck/engine combo, I found no reason why any consumer should think twice about buying the EcoBoost F150 for towing.

After spending 8 days and over 1,000 miles in the 2011 Ford F150 FX4 with the EcoBoost V6 I found that pretty much everything that Ford has said about this high tech engine is true. It does offer all of the power that a truck owner needs and that power is applied in a way that makes the truck fun to drive, while also making short work of towing and hauling. At the end of my time with the EcoBoost powered F150 it left me with no questions as to why this engine has become the dominant force in the F150 lineup with over 40% of the trucks sold last month coming with this great new engine. I give Ford two thumbs up for doing what no company has been able to do before – offering a V6 engine (albeit twin turbo) that really can do all of the things that a basic V8 can do while also getting better fuel economy.

Check out the gallery below for a closer look at the 2011 Ford F150 FX4 EcoBoost.