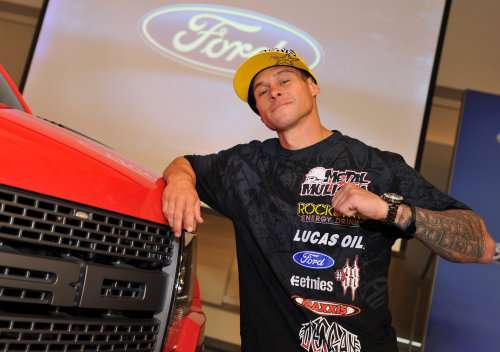 Yesterday was the final day for the 17th edition of ESPN’s X Games, including the RallyCross finals featuring some of the biggest names in the world of rally racing and when the dust cleared – Ford had claimed gold, silver and bronze with Brian Deegan winning followed by Tanner Foust and Finnish driver Marcus Gronholm.
Advertisement

The new Ford Fiesta Rally Car has proven to be a formidable opponent in rally events around the world and with the team of all star drivers like Tanner Foust, Brian Deegan (shown on the right), Ken Block and Marcus Gronholm – Ford expected great things from the Fiesta race program at X Games 17. However, the Fiesta had to fight through some of the best rally cars and racers in the world; facing legendary rally models like the Subaru WRX STi, the Mitsubishi Evolution and the Citroen C4 along with new models such as the Hyundai Veloster piloted by Rhys Millen.

The early rounds started out very well for Ford as Tanner Foust practically walked to victory in the first race of the day. That win was followed up by Brian Deegan as he held off Subaru’s Travis Pastrana to win the second heat of the day. The third race of the day saw Liam Doran in his Citroen guarantee his spot in the finals by beating out his field of four and in the final 1st round race of the day; Marcus Gronholm dominated a field which included Subaru racer Dave Mirra and rally superstar Ken Block. Unfortunately for Block, Mirra got into the back end of his Fiesta Rally Car very early in the race – forcing Block to make up a ton of time. While he was able to climb back to second, his #43 Monster Ford Fiesta would never really challenge for the lead.

In the second round, Travis Pastrana came out charging in his Subaru WRX STi while using hand throttle controls due to his broken right leg which occurred during his attempt for “Best Trick” in the motocross class. Pastrana struggled earlier on in the weekend, crashing during one of the previous runs and losing to a very hot hand in Brian Deegan in the 1st round. However, in the 2nd round Pastrana showed that even with a broken leg, he can hang with the best in the world as he won and guaranteed himself a shot at the gold. Dave Mirra won the 2nd race of the round when the other two cars in the class both crashed on the first lap and in the final race of the 2nd round, David Higgins advanced to the finals with his Subaru. Also, in the race won by Higgins, Ford’s Ken Block ran into mechanical problems – effectively taking him out of contention for a medal. Finally, in the last chance qualifier race, Rhys Millen and his Hyundai Veloster pushed themselves through to take a shot at the gold medal.

So the field was set for the RallyCross race that would decide the medalists for X Games 17. The cars started in two rows of 4, with the front row being comprised of three Ford Fiestas and Liam Doran’s Citroen. The second row consisted of the Subarus driven by Mirra, Higgins and Pastrana along with the Hyundai of Rhys Millen.

The action started early, as when the group entered the first turn Liam Doran in the Citroen cut down across the front of World Rally Championship nemesis Tanner Foust – sending Doran hard into the inside wall. As the Citroen slid across the track and into the tires, Foust and the rest of the field managed to sneak past. From there on, Brian Deegan ran a near-perfect race and took home the gold medal by some six seconds ahead of silver medalist Tanner Foust. After tangling early with Doran, Foust ran a consistent race – holding off both bronze medalist Marcus Gronholm and 4th place finisher Travis Pastrana – even though one of Foust’s tires began to lose air with three laps to go.

Marcus Gronholm capped off the all-Ford podium by claiming the bronze medal in his Best Buy sponsored Ford Fiesta but he had to work for it. Racing with a broken right leg and steering wheel mounted throttle controls, Subaru’s Travis Pastrana did a masterful job of working his way through the field – managing to challenge Foust for the second place spot before crashing very late in the race. This gave Gronholm the bronze as the injured Pastrana settled for a 4th place finish.

X Games 17 offered an incredibly exciting look at the world of rally racing and with Ford’s drive to build one of the best rally racing programs in the world, it would be great to see more recognition (read: tv coverage) of the high speed and high impact world of rally cars. The RallyCross win was the first gold medal for Deegan in 8 years, since claiming the top spot back then for the “Best Trick” class – the same one that caused Travis Pastrana to break his leg this year. Deegan, who is more familiar with off-road truck racing fans was elated after the win, offering the interview that you can check out below the race highlights.

Check out the video below for highlights of the X Games 17 RallyCross race, with Ford’s Brian Deegan taking the gold!