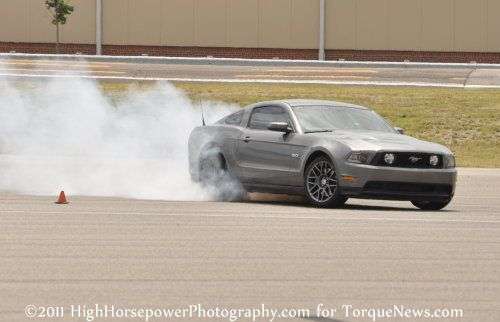 Ford has taken a more aggressive approach to the new age of motorsports with their Ford Fiesta and Focus models being featured in the various Rally events with drivers Ken Block and Tanner Foust, the 2011 Ford Mustang being one of the top cars in the drifting world with driver Vaughn Gittin Jr. and their pickup trucks have long dominated the off road racing circuit with driver Brian Deegan flying the Ford flag this year. While Ford has been a major name with the NHRA and NASCAR ranks for decades but with the growing popularity of these new forms of motorsports, Ford is the biggest player among the American automakers in these budding forms of auto racing.

Motorsports like drifting, rally and truck racing all engage the fans more closely than the likes of NASCAR and to build on that fan-friendly atmosphere, Ford is introducing the new Octane Academy. Fans can apply to the program by putting together a short video explaining why they are the most worthy of admission to this high performance Ford racing program and with each of the four famous drivers offering a similar program and several students will be admitted to each program – there is an opportunity for multiple rally, drifting and off road truck racing superfans to learn how to drive from some of the best in the business.

After each of the four day course with one of the well-known Ford racers, the students at that given program will go head to head to crown the king of the hill – with the overall winner from each group taking home a custom Ford vehicle designed by the various Ford racers!

To help give the members of the media a better idea of what drivers like Vaughn Gittin Jr and Brian Deegan do behind the wheel, Ford had a massive tarmac area setup for Gittin Jr to take us out and give us a taste of the drifting world in a 2011 Ford Mustang GT. After spending time in the car with Vaughn, we moved over to another course where Brian Deegan tore around a road course, drifting and jumping in a 2011 Ford SVT Raptor F150. The image above and the gallery below offer a few shots of Gittin tearing up the pavement (and the tires) in both a Mustang GT (dark grey) and the new V6 Mustang (silver).

Ford Orange County wrote on July 15, 2011 - 2:30pm Permalink
Sounds like a reality show in the making; fast cars, guys testing their limits in Ford cars, achieving personal breakthroughs.... Will it be televised?

Elon Makes a Cybertruck Statement With an Action, But Quiet in Words
Tesla's Record Month in China: Doubled Registrations in March 2021
END_OF_DOCUMENT_TOKEN_TO_BE_REPLACED