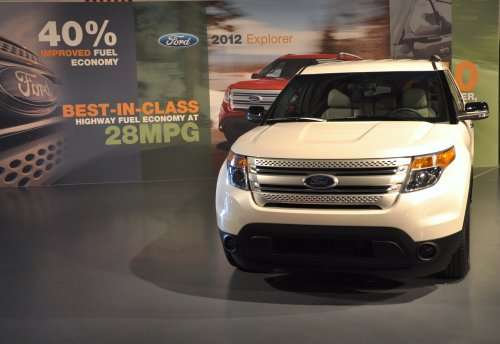 Ford Motor Company recently invited a group of reporters to their Romeo Proving Grounds for a first-hand, hands-on look at the upcoming 2012 Ford Explorer EcoBoost – which will be among the first 4-cylinder EcoBoost models from Ford in the US market when it arrives later this year.
Advertisement

There was a point in time where the consideration of a 2.0L 4-cylinder engine powering a full sized SUV would be considered nothing but foolish – and for good reason – as traditional 4-cylinder engines couldn’t offer the horsepower and torque needed to move a larger vehicle but that is not the case of the 2012 Ford Explorer EcoBoost. Thanks to the advancements in engine technology, the Ecoboost 4-cylinder is designed to provide enough power to be able to do everything that the average consumer needs it to do while yielding incredible fuel economy for a sport ute of its size. Ford announced in late July that the turbocharged EcoBoost Explorer would offer 20 miles per gallon around town and 28 on the highway – combining for an overall fuel economy rating of 23mpg (Click here for more on the EcoBoost Explorer's fuel economy ratings). When you compare these numbers to the fuel economy figures for the current 3.5L V6-powered 2011 Explorer (17 city, 23 highway, 19 combined), you are getting a fair improvement across the board but while fuel economy is nice – is this tiny turbocharged engine really enough for the 7-passenger 2012 Ford Explorer?

I spent a couple hours behind the wheel of the 2012 Ford Explorer EcoBoost, both at Ford’s Romeo Proving Grounds where we could test the capacities of the turbocharged SUV without the concern of speed limits and traffic laws as well as out on the open road of Southeastern Michigan. This allowed us a chance to experience the powerful 4-cylinder EcoBoost engine in all sorts of different road conditions, from highway to country roads with open flat areas and massive hills. The 2.0L EcoBoost 4-cylinder packs 240 horsepower and 270lb-ft of torque so where it lacks in horsepower compared to the current 3.5L V6 (which has 283hp), the EcoBoost’s torque rating puts it nicely above the 252lb-ft offered by the V6. Further helping the EcoBoost 4-cylinder to get the larger Explorer moving is the fact that it is only offered in a front wheel drive configuration – cutting the weight of the 4WD system out of the equation. This means that the EcoBoost Explorer may not be ideal for someone who lives in a hilly area that gets lots of snow but shy of its abilities to roar through deep snow (or mud), the 4-cylinder EcoBoost option does a great job of powering the Explorer.

When cruising around town, the 2012 Ford Explorer EcoBoost is whisper quiet while providing solid acceleration when needed. Don’t get me wrong – with 240 horsepower it’s not going to win many drag races but under normal driving conditions it never felt underpowered. The roads around Southeastern Michigan are pretty flat but whether the speed limit was 25 or 55, the EcoBoost Explorer provided as much power as the average consumer could really need. Once we got out onto the highway (which were also mostly flat), the EcoBoost continued to shine – easily reaching cruising speeds of 70-80 miles per hour without much effort. Also, when the need arose to step out into the left lane and flex a little EcoBoost muscle; the Explorer felt more than willing to reach the century mark (although we didn’t do that…because it would be illegal).

A main concern of skeptics is that the 2012 Ford Explorer EcoBoost will struggle in certain driving situations like extremely steep hills so to quash those concerns, Ford set us loose on one of the incredibly mountainous driving courses in their Romeo Proving Grounds. This track offers hills larger than most consumers will ever see in their daily driving experiences with huge, sudden hills with little-to-no time to build momentum. Anyone who has ever driven an underpowered truck or SUV knows the feeling of their vehicle running out of steam on a long climb but the EcoBoost powered 2012 Explorer was able to maintain a smooth cruising speed at both 45 and 70 miles per hour…showing that whether you are on the highway or in a small town, a steep hill isn’t going to make you “that guy” slowing down traffic because your SUV doesn’t have enough power to climb it at cruising speed.

While the exclusion of a all wheel drive in the 2012 Ford Explorer EcoBoost may be a deterrent to some, those who can live with front wheel drive should find this engine option to be the best of the lineup. The fuel economy numbers offer a healthy improvement over the V6 powered 2011 Explorer and shy of a few horsepower and 4WD, the EcoBoost Explorer offers all of the amenities that come with the non-EcoBoost models…making for one great, fuel sipping SUV that can seat 7 passengers in comfort and style.

The only real downfall to the 2012 Ford Explorer EcoBoost is the fact that it is a premium engine option, meaning that this 4-cylinder engine carries a price of $995. However, you are paying $995 more for more torque than the standard V6 and a substantial improvement in fuel economy across the board. The 2012 Ford Explorer EcoBoost models are expected to hit showrooms in August or September of this year with a starting price right around $29,185.