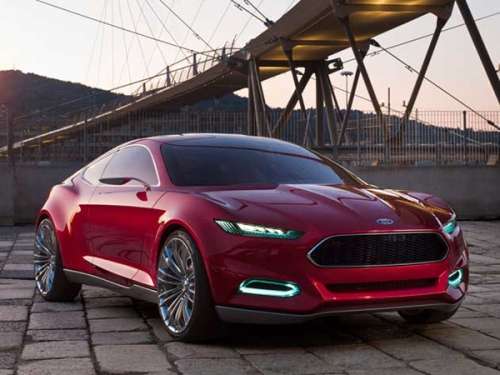 The past trend for carmakers was to design cars with retro styling, and Ford may already be behind the styling curve as they take an all-new direction with the 2015 Mustang.
Advertisement

With sales of the Mustang languishing recently, and it being outsold by the Chevrolet Camaro for the last two years, Ford is looking to take the styling of the next-generation Mustang in a radical new direction. The Wall Street Journal is reporting that the 2015 Mustang will look very different than the current 60s-inspired retro styling. But it may be coming a bit too slow because the auto industry has already moved in a new styling direction.

When you look at the most recent successful styling trends in the auto industry, cars like the Range Rover Evoque come to mind. The new crossover from Land Rover got its styling cues from a concept car with a radical new look. The Evoque has been so successful that Land Rover had to hire 1000 new employees to keep up with the demand. And the new styling of the Evoque just won the World Design Car of the Year award at the NYIAS. Porsche is launching an all-new similar concept-like design with their new Macan SUV that will begin production next year.

Ford knows that they have to keep pace with the styling trends in order to attract younger buyers from the Millenial generation if they want to remain competitive. The Wall Street journal is reporting that Ford will update the 2015 Mustang and it will look a lot like Ford’s Evos concept car that was unveiled last summer. The 2013 Ford Fusion also got its styling cues from the Evos concept that may have borrowed cues from the Aston Martin.

While the new look won’t please many die-hard Mustang fans, Ford hopes to draw in a new generation of buyers who didn’t grow up with the original style Mustang. As reported by Motor Authority, when shown the Evos concept, a prospective Mustang buyer from the Millennial generation was quoted as saying, “The new Evos looks pretty sweet. Maybe I should wait until it comes out.”

Ford has to be keeping an eye on the trends in automotive styling, and they are moving in a direction that is away from the current generation Mustang retro-styling. Ford knows that the biggest potential sales growth is going to come from a new generation who couldn't care less about the nostalgic look of the current Mustang. When the company introduced the first Ford Mustang on April 17th 1964, they had no idea it was going to be the most successful launch since the Model A.

Now 50 years later, Ford is smart enough to know they can’t live in the past with an outdated design. But they could be three years late and maybe should have introduced the new design at the 2012 New York International Auto Show.