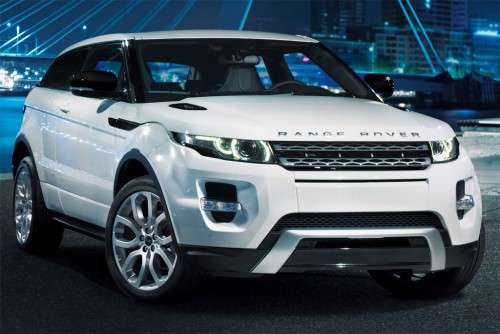 Evoque gets another award, named World Design Car of the Year 2012

The Range Rover Evoque has won another award to add to its long list. The new vehicle made by Land Rover has been crowned World Design Car of the Year 2012.
Advertisement

The Range Rover Evoque is winning awards left and right with the latest award coming yesterday at the New York Auto Show where the Evoque was crowned World Design Car of the Year 2012. The two finalists, the Citroen DS5 and Volkswagen Up, didn’t face a chance against the Evoque’s bold concept car looks and rugged styling.

Land Rover says this is the 101st global award the Evoque has scored, and the awards seem to be matching strong sales for the popular SUV. As reported here on Torque News, sales have been so strong for the all-new sexy Evoque that Tata Motors who owns Land Rover, had to hire an additional 1,000 workers to keep up with the demand.

With luxury crossovers being one of the fastest growing segments, the 2012 Range Rover Evoque is definitely generating buyer interest. The Evoque's sexy exterior design began with the LRX three-door concept unveiled at the 2008 North American International Automobile Show in Detroit. Land Rover’s new design chief, Gerry McGovern, intended the concept to be a design statement and the company took a wait-and-see approach.

With its back-slanting roofline, rising beltline, and short overhangs, the LRX received enthusiastic response at the Detroit Auto Show and quickly moved the LRX out of the dream stage into production reality. The 2012 Evoque is offered as either a five-door or three-door model, which the company calls a coupe, and the styling is sporty and aggressive.

The 2012 Evoque seats five and has a starting price of $44,000. Land Rover is clearly targeting the mid-size BMW X3, Lexus RX, and Audi Q5 SUV buyers and it looks like they’ve hit on just the right formula for success.

The Evoque gets a new 2.0-liter four-cylinder with 240 horsepower and 251 pound-feet of torque that’s a big departure from Land Rovers big thirsty V-8’s. It’s mated to a six-speed automatic, comes with the latest direct-injected turbocharged technology and gets 18/28 miles per gallon city/highway.

The Land Rover brand has always had some of the best interiors in the industry and inside, the Range Rover Evoque follows in the same tradition. The Evoque benefits from a long line of British cars that put a special emphasis on style, and the quality of materials is the best in class.

The all-new Range Rover Evoque arrived at a good time as the brand definitely has updated its image. Despite having come from a long heritage of strong off-road credentials, the World Design Car of the Year 2012 will most likely spend most of its life between the white lines. The Evoque gets another well-deserved award.

Toyota's First EV Will Have a Name of BZ: Toyota BZ
First Videos From Inside The Boring Company's Las Vegas Loop
END_OF_DOCUMENT_TOKEN_TO_BE_REPLACED