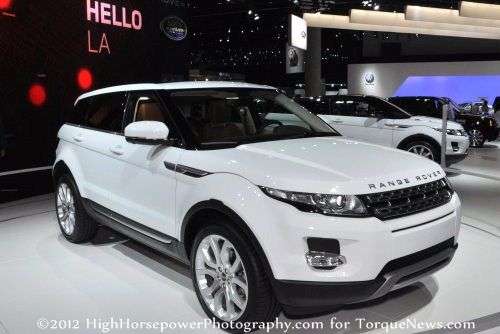 Land Rover hiring 1000 workers to keep up with Evoque demand

The all-new Range Rover Evoque has been such a huge success, Tata Motors is hiring 1,000 workers to keep up with the strong sales demand.
Advertisement

The all-new 2012 Range Rover Evoque born out of the LRX concept coupe that arrived in dealerships last fall, has exceeded Land Rovers expectations. The new Evoque with the raked roofline has been a big hit among mid-size SUV buyers.

Demand has been so strong for the all-new sexy Evoque that Tata Motors who owns Land Rover, has just announced they will be hiring an additional 1,000 workers to keep up with the demand. The luxury brand builds the Evoque and the LR2 at its Halewood plant which will now employ 4,500 workers. That is three times the number of plant employees they had in 2009.

The plant will be humming along at near full capacity with three eight-hour shifts trying to keep up with outstanding sales. So why has the all-new Evoque been so wildly popular? It starts on the outside with the raked roofline that gives it a concept look. The Evoque comes as either a five-door or three-door model, which the company calls a coupe, and the styling is sporty and aggressive.

The Land Rover brand has always had some of the best interiors in the industry and the 2012 Range Rover Evoque follows in the same tradition. The Evoque benefits from a long line of British cars that put a special emphasis on style, and quality of materials is the best in this class.

The 2012 Evoque uses a 2.0-liter four- cylinder with 240 horsepower and 251 pound-feet of torque and is mated to a six-speed automatic. The new four-cylinder is a big departure from Land Rovers big thirsty V-8’s. The all-new 2.0-liter comes with the latest direct-injected turbocharged technology.

The Evoque uses an independent suspension that is set up more for comfort and control. MagneRide adjustable dampers and 20-inch Michelin tires are on the option list but is much more civilized than its heritage would suggest. It's not for four-wheel driving tracks.

The 2012 Evoque is designed more for on-road comfort than its big brother Range Rover with legendary off-road prowess. But the average SUV owner will never take their vehicle off-road anyway and shouldn’t be an issue.

The combination of horsepower, torque, and the fact that the Evoque weighs a few hundred pounds less than most competitors, makes the crossover a potent and sporty driving machine. On the road, the Evoque feels sportier than either the LR-2 or a Range Rover Sport. The power is excellent and the ride is as comfortable as anything in the class.

Although it’s smaller than any current Land Rover, it is five inches shorter, four inches wider, and has a longer wheelbase than the original Range Rover. Clearly Land Rover is targeting the mid-size BMW X3, Lexus RX, and Audi Q5 SUV buyers and looks like they have hit on just the right formula.

Toyota's First EV Will Have a Name of BZ: Toyota BZ
First Videos From Inside The Boring Company's Las Vegas Loop
END_OF_DOCUMENT_TOKEN_TO_BE_REPLACED