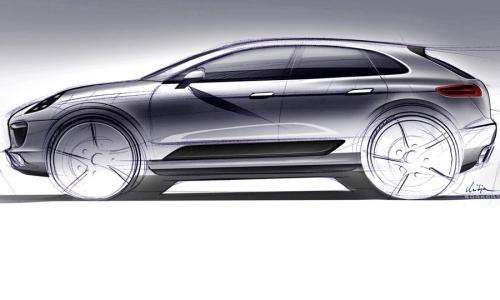 The all-new Macan will be the first Porsche powered by their still-secret twin-turbocharged V-6 engine.
Advertisement

With the newest Porsche beginning production next year, details on the Porsche Macan are starting to emerge. The Macan is a smaller version of the popular Cayenne, and Porsche is hoping the new variant will be just as successful as its Cayenne stablemate. The Cayenne has been the companies best-selling model ever and has generated huge amounts of cash for the German carmaker.

Porsche is launching several new models in the next few years and the Macan is intended for people who found the Cayenne a bit too large and looking for something smaller and more crossover like. Auto Car has revealed that the all-new Macan will be released with a new 3.0-liter, twin-turbocharged V-6 engine believed to be based on the larger engine from the base-model Cayenne.

The new sporty Macan turbo will develop 370 horsepower and 400 lb-ft of torque which will make the new crossover the fastest model in its class. Porsche aims to establish a new niche market for a smaller sporty SUV with typical Porsche features such as being light weight, ease of handling and agility. And with that kind of power under the hood, it will also be fast, thanks to a pair of Borg Warner sequential turbos bolted to the 3.0-liter V-6.

The Macan is reported to be based on Volkswagen’s new MLB platform and will get an Audi-engineered, Torsen torque-sensing differential that Porsche has tweaked for the Macan to power all four wheels. Transmission choices will include a seven-speed manual, or an optional seven-speed, dual-clutch PDK.

The Macan drivetrain has already been undergoing some intense testing under cover of Audi Q5 and Cayenne prototypes. “We’ve surprised even ourselves,” said Porsche development boss Wolfgang Hatz said about the Macan. “It drives incredibly well and, from what we’ve seen from the competition, will be the most sporting car in its class.”

In addition to the 3.0-liter V-6, Auto Car reports the Macan will be the first Porsche since the 968 ceased production in 1995 to have a four-cylinder engine offering. Though it’s not confirmed, Porsche sources have said the base-model Macan will have a 2.0-liter turbo four-cylinder with around 220 hp. The Macan could also get a 2.0-liter turbodiesel powerplant with 190 horsepower and mileage in the 45 mpg range making it the greenest Porsche in its lineup.

For the U.S. market, Porsche is said to be planning a Macan Hybrid that will feature the same gasoline-electric drivetrain used in the Q5 Hybrid. It uses a 208 hp turbocharged 2.0-liter, four-cylinder engine mated to a 54 hp electric motor.

No doubt Porsche is paying close attention to the competition like the wildly successful Range Rover Evoque with concept-like styling that won the World Design Car of the Year award at the NYIAS. The Macan should be an attractive new model in the Porsche lineup, and will attract new and younger customers to the premium brand along with the Boxster. If the new smaller SUV is as successful as its stablemate Cayenne, Porsche could hit a home run with the new twin-turbo Macan.