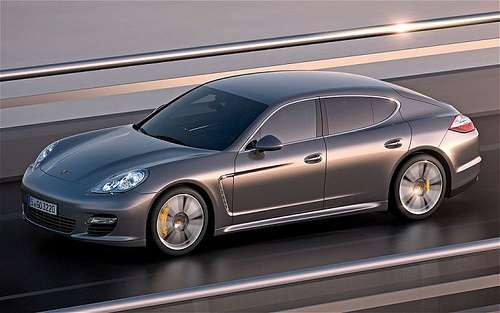 Porsche has revamped their entire lineup since the 2009 model year, and according to reports, more changes are on the way.
Advertisement

Details are beginning to emerge about Porsche’s future lineup and according to a recent report by Automobile Magazine, Porsche will launch several new models by 2017. The German automaker has been highly successful in recent years and claims to have the highest profit per unit sold of any car company in the industry.

The merger with Volkswagen and a large injection of cash, has left the German company in a good position with lots of money to spend on developing new models. Volkswagen has made it clear that they want to be the largest car manufacturer on the planet, and new Porsche CEO Matthias Muller has injected a new passion into the brand.

The controversial styled four door Porsche Panamera is set to get an update next year that should make the car more appealing. It is slated to get an updated exterior design with new bumpers and restyled headlights. But according to Automobile Magazine, the German automaker has much more planned for the Panamera in the near future.

The reports are suggesting that after the 2013 update, there could be several new variants including a shooting brake (wagon), several cabriolet models and a long-wheelbase variant which will undoubtedly be popular in China. The second generation Panamera is expected to bring more variants to the lineup by 2015. Sources also say a Pajun Panamera Junior could be launched in 2017. Little is known about the smaller model, but rumor has it that it could be offered in two or three body styles.

The Cayenne SUV has generated huge amounts of cash, enabling Porsche to return to racing and is the company's best-selling model ever. To compete with the BMW X6, Porsche may also be introducing a four-door coupe version of its next-generation Cayenne and could hit showroom floors in 2016. The highly successful Cayenne already features a Cayenne V-6, Cayenne S, Caynne S Hybrid, and the Cayenne Turbo.

The Cayenne S Hybrid is a full hybrid that can operate on electricity, gasoline, or both. The pinnacle model, the Cayenne Turbo with the 500-horsepower, twin-turbocharged, 4.8-liter V-8 will go from 0- 60 mph in 4.6 seconds which puts it alongside the BMW X5 M and X6 M as the quickest, fastest SUVs in the world.

While much of the information coming out hasn’t been announced by Porsche, we can surely expect many changes to the Porsche lineup in the next five years. Also expected is the Carrera 4, 4S, Cabriolet 4, 4S, GTS, and Porsche may have a surprise with a 911 Targa in 2014. The 991 version of the 911 Clubsport, Turbo and Turbo S, GT3, and GT2 RS are probably a couple of years away from production.

LG's New EV Battery Plant Is a Welcome News for Tesla
Tesla Giga Berlin's New Hurdle: It's Not Only the Gov't, but Now Tesla Itself
END_OF_DOCUMENT_TOKEN_TO_BE_REPLACED