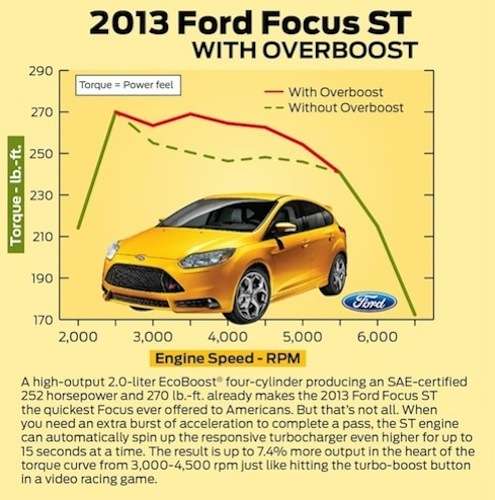 Ford has confirmed the 2013 Ford Focus ST will have an SAE-certified output of 252 horsepower and 270 lb. ft. of torque.
Advertisement

Ford Motor Company has announced today that the 2013 Ford Focus ST has been officially SAE certified with 252 horsepower and 270 lb. ft. of torque. This will come from Ford’s turbocharged 2.0-liter four-cylinder EcoBoost engine. Ford says that the new engine will feature an ‘Overboost’ turbo that will increase acceleration by extending the torque curve from 3,000 rpm to 4,500 rpm for up to 15 seconds.

What this means for anyone who likes performance, is that the 2013 Ford Focus ST is going to be one fast little compact car. We shouldn’t be surprised that Ford has developed a high-performance Focus, because the performance car wars are just starting to heat up again. And Ford is getting ahead of that game by developing a compact car that will perform like few others. In Ford’s press release, they said pilots will call it “the Focus with afterburners.”

The ST is built for performance-hungry drivers

Anyone familiar with horsepower, knows that it's more than just the number of ponies under the hood. The 2013 Focus ST also has the torque to pull the car hard through the higher engine rpm’s. The power curve will peak from 3,000 to 4,500 rpm making the 2.0-liter Focus ST one fast car. This will be the first Ford Overboost EcoBoost engine sold in the U.S.

Ford engineer Lisa Schoder says, “We limit peak turbo boost to maintain a wide margin of safety and durability over the life of the car,” she adds “But overboost is cool in that it tweaks more acceleration through the turbo for brief periods for performance-hungry drivers.”

In order to keep the turbocharged engine cool, engineers have given the ST a larger cooling system in order to handle the extra top-end performance. The Focus ST will also feature a race ready suspension and larger performance brakes to make sure the fast ST will stop as well as accelerate.

Even though the 252 horsepower Focus ST will come with front-wheel-drive, the engineers have taken torque steer under extreme acceleration into consideration by using a sport-tuned electric power steering. The system will help the driver stay in a straight line during spirited driving situations. The 2.0-liter EcoBoost engine will be mated to a six-speed standard transmission.

Other performance options are available

One of the fun exterior options available on the 2013 Ford Focus ST will be a Tangerine Scream metallic color that will be offered exclusively on the ST. Inside, performance oriented buyers can get race-inspired Recaro seats with matching color accents.

Ford has announced that the first 1000 buyers who preorder their Focus ST before August 20, will receive a GoPro HD Hero2 Motorsports Edition camera pack to capture their track day drive. ST buyers will receive the camera after vehicle delivery.