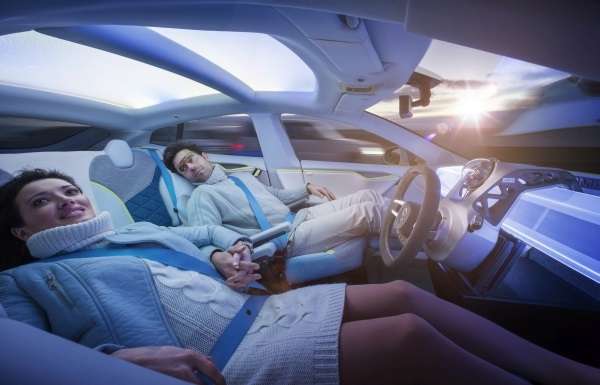 The majority of actual owners of Model S cars say that they would pay $5,000 for autonomous driving features.
Advertisement

We recently conducted an informal poll of actual Tesla Model S owners and asked them if they would be interested in a package that offered the latest autonomous driving technology. This is a bit of a touchy subject with Tesla owners and enthusiasts. Tesla is currently a little behind the curve in this technology. Nobody is trying to say that Tesla isn’t going to leap ahead in the coming years. It seems likely. However, as of today, Tesla does not offer forward collision assistance, lane keeping, and back-up automated braking as its peers in the luxury sedan market all do.

Both BMW and Cadillac have autonomous driving systems that go much further and can drive a car in traffic (links below). We wondered how actual Tesla owners felt so we did a poll within an on-line club for Tesla owners we are fortunate to be able to participate in. The answer was clear, Tesla Model S owners overwhelmingly they said they want this type of technology, but there is also an undercurrent of reservation.

Our exact poll question was “If an autonomous driving package for the MS was offered that would work well, and could safely operate the MS in traffic on highways and also on highways not in traffic (not congested), as well as take full control of the car in situations where an accident was about to occur, would you have bought it, or would you buy it - Cost $5,000. The poll is running about two to one in favor of “Yes” with much of the commentary saying “heck yah!” The other comments are important though.

Jason G. started things off. He said that he is a definite yes, but only if there is an over-ride that puts the driver back in control. I’m with Jason on this. It seems only logical and prudent that a driver be able to immediately retake control and we are confident that as autonomous driving begins to creep slowly into our car culture that will be the case. Chris B. seemed to sum up the folks in favor of autonomous driving due to the hassles many face in big cities, particularly California. He writes “I have been driving in soul-sucking gridlock LA traffic for well over thirty+ years now. Every year it gets worse as the So. California population grows larger and larger by the day. It would be a God-send to have an auto-pilot for freeway commuting (especially for bad traffic).” Both of these owner-commenters captured the spirit of the question.

Michael K. wants to keep it real. His concern, which is very valid, is that a full package as described in the question might cost more than $5,000. It is hard to tell at this point. Both Cadillac and BMW promised their systems would launch this year, but as “on-the-go” mid-year packages. Neither has shown their cards yet. However, the most expensive packages of self-park, automated stopping, lane keeping, and radar cruise with vehicle spacing seem to only add up to about $3800. Within those described systems are all the bones of a system that keeps a car in its lane on the highway automatically and stops the car if necessary. So there is hope that the package I have imagined here could be sold for $5K. Arthur B. also has confidence in Tesla doing this in an affordable way saying, “It will be cheap after Elon’s done with it! Just some sensors and software!” It is hard to argue against that given what Mr. Musk has already done.

One of the club members added the text “No, I love driving my Model S” in front of the check off box for “No.” It would not be fair to ignore this sentiment. Under some Tesla safety stories we have published discussing topics like active forward collision prevention, readers have offered comments we respect. For example, under a story we wrote to provoke feedback about the safety of the Model S, one TN commenter, Charles M. said “A vehicle is safe when it prevents injuries in an accident. It's the driver's job to avoid accidents. The Model S already has braking distances better than a lot of supercars.” All true. Another club member added a check off box saying “Not until laws, protocols and successful implementations are well understood.” That box received a respectable amount of checks. Clearly, this is a responsible group. Toyota is taking this exact view. Its Lexus' self-driving technology is already done, but the automaker is waiting until about 2016 to start offering it.

What is clear is that Tesla owners would welcome most of the current autonomous driving aids in cars today. Furthermore, this forward looking group is more than ready to embrace positive changes that help make their commutes a little more tolerable.

Our thanks to those Model S owners that took time to share their views. We encourage any Model S owner or enthusiast who would like to continue the dialogue and cast their vote to comment below.

Related Stories:
NHTSA steps up to help us understand self-driving cars
Hands-free driving coming with your next Cadillac
2014 BMW X5 will now drive for you

Patrick Rall wrote on March 26, 2014 - 12:57pm Permalink
No one with a car worth driving would want it to drive itself. Additionally, no true driving enthusiast would want the car to do the work for them. The fact that so many Tesla owners want the cars to drive themselves speaks volumes of the car and the people who buy them.
John Goreham wrote on March 26, 2014 - 1:16pm Permalink
Good point, and I understand where you are coming from. However, in defense of the Tesla driving enthusiasts, some of them echo your exact sentiment. It is a diverse group.
Patrick Rall wrote on March 26, 2014 - 2:49pm Permalink
Yeah, people with questionable taste come in all shapes and sizes. However, I dont know many Corvette, M5 or Mustang owners who wish that they could nap, play Magic or read 50 shades of grey while taking a road trip.
John Goreham wrote on March 26, 2014 - 3:09pm Permalink
You're spot on. The 50 Shades readers all drive Audis. Everyone knows that :)
Richard Hubert wrote on April 14, 2014 - 2:20pm Permalink
One thing to remember about autonomous systems is that it shifts accident responsibility away from the driver and to the manufacturer instead. In this regard it is surprising that OEMs are building more cars with these features, heading towards the Google self-driving car. So it is very likely that Tesla realizes this and has decided to limit their liability by limiting autonomous features. There can be many more discussions about self-driving vehicles, but when the powers that be cannot even limit the speed of a train around a known curve automatically (as was the case months ago with a commuter train making a high speed entrance into NYC, causing it to derail), it makes you wonder about the practical reality and safety of self-driving vehicles driven strictly by technology. And the other side of the argument is - what should the real role of the driver be? As soon as you start to take away driver responsibilities where does it end? For example - cruise control. This feature is on virtually all cars, and has been for many years, but I have always wondered about the safety of this system. How many accidents have been caused by vehicles cruising along on cruise control, without on-going driver input. If all the driver really has to do is steer the vehicle, it would seem that many can become bored, get distracted, start reading - or whatever - and their mind is off driving and onto something else. If things suddenly go wrong, the driver is not necessarily positioned, physically or mentally, to control the vehicle. And that is the problem with autonomous systems - they remove necessary driver concentration from driving the car when automated functions cannot necessarily compensate, or steer around, some of the many road hazards, weather changes, etc. that invariably arise.