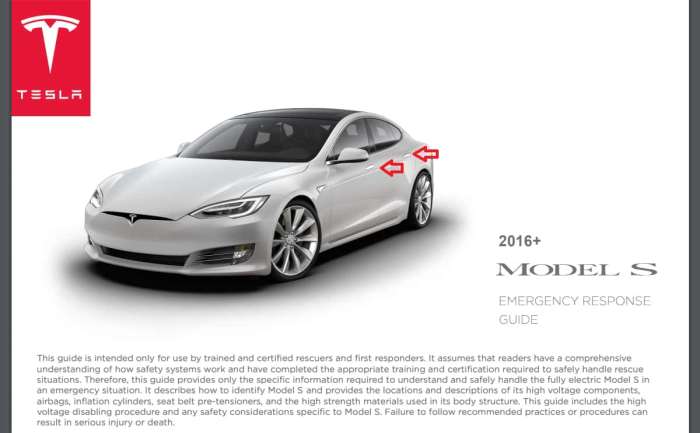 A Tesla Model S that observers say was traveling at a high rate of speed prior to a crash may have had a door-handle malfunction that prevented would-be rescuers from pulling the occupant from the vehicle. Accidents involving fatalities can and do happen with almost all model vehicles, but what makes this crash seem more tragic is that the exact scenario seems to have been predicted in a 2017 Tesla Forum post.

The post by "gornikmarcin" which you can read in its entirety, stated in 2017, "I believe door handles on a Model S are a safety issue and horrible manufacturing defect on the Tesla part. If you get into the accident and first responders can't open the door to pull you out... just use your imagination Tesla, do you really want someone to get hurt because of a microswitch and bad wire placement?"

Unlike a typical car, the Model S has door handles that are flush to the vehicle when not in use. They present themselves when needed. When the airbags deploy, the handles are supposed to pop out and the locks are supposed to be undone so that the door can easily be opened from the outside. Tesla is aware that these door handles are unusual and has a special guide for first responders. In the guide, the door handle section includes these instructions:
- Model S has unique door handles. Under normal conditions, when you press a handle, it extends to allow you to open the door.
-NOTE: When an airbag inflates, Model S unlocks all doors, the trunk, and extends all door handles.
-NOTE: If the door handles do not function, open the door manually by reaching inside the window and using the interior door handle.

A passerby named Misty Lea Thomas claimed on Twitter that she and her husband were at the scene. Misty says, "We were there. My husband tried to break the back window out. The airbags didn’t deflate after the crash and trapped the person inside. We couldn’t even see inside the car because all of the bags filled the car. The doors couldn’t be opened." She went on to add, "These airbags didn’t deflate afterward. The bags trapped the driver and we couldn’t get past the bags to get to him. The entire car was filled with airbags." Finally, Ms. Lea says, "My husband tried to get the door handles to pop out but they weren't working." Following our own review of these tweets, the poster seems to have discontinued her Twitter account after being harrassed by other commenters. However, there are other reports with similar information. 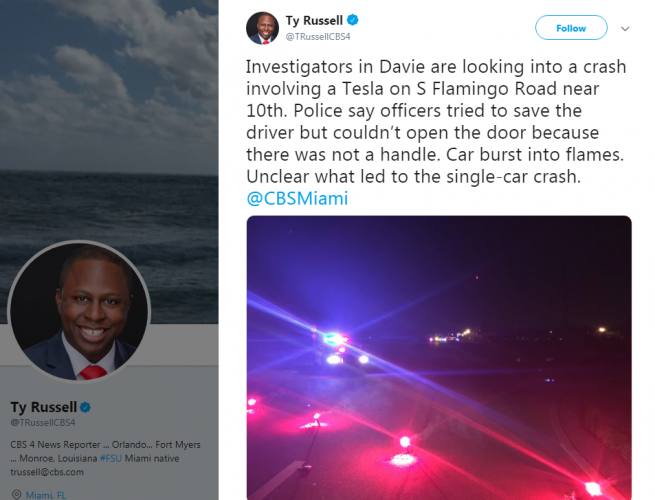 We were also able to also find this corroborating story by Davie police spokeswoman Vivian Gallinal, who indicates that arriving officers had to try to break windows to gain access. Images show that the vehicle's structure is not very deformed and the door handles are not presented.

Torque News has opted not to sensationalize this story out of respect to the deceased. Images, video, and more graphic details of the event can be found at this Twitter link

DeanMcManis wrote on February 25, 2019 - 8:21pm Permalink
I knew that you would chime in on this accident in an effort to blame Tesla for this horrible outcome. One key point is that the highway patrol said that that high speed probably contributed to the accident. Catastrophic accidents have many ways where systems fail, and high speed collisions and water accidents can destroy/disable electronic safety systems. Two of my current cars have electronic servo door releases. Both have indoor manual release pull handles, but neither of them would have helped with external door entry in a crash like this.
John Goreham wrote on February 27, 2019 - 1:08pm Permalink
It's not just me. Now a few days since the accident the topic is pretty hot in the Tesla Owner groups on FB. And the fact that a blog on Tesla's own website predicted this proves I am not the only one asking why this six-figure luxury car advertised by its maker as the world's safest does not have a better solution to a problem that is only created by stylists.
DeanMcManis wrote on February 28, 2019 - 3:07pm Permalink
I can certainly understand How a Tesla Model S owner would be concerned, and not understand how various safety systems can fail in a catastrophic accident, but it is not necessarily a flaw in Tesla's design as you imply. As I mentioned before, two of my cars have electronic servo door releases, as do many modern cars. Servo door motors require electrical power and a working control system or switch to actuate and open. On the Model S pulling the interior door handle all the way back operates a manual door cable release. Now this driver could have been unconscious, or otherwise disabled so that they could not reach the door handle. Sometimes people who are worried about being trapped in a burning car or underwater can have a glass shattering hammer tool in their glove box. Having someone predict a system failure in a catastrophic accident is pretty obvious, especially one related to electronic door actuators, but again it does not confirm a design flaw. It just shows that no design operates perfectly under all conditions. Especially with a major crash. Seatbelts have certainly pinned occupants inside a burning or underwater car before in a bad crash, where they couldn't get out, but it does not mean that seatbelts are poorly designed.
tomekLuple wrote on April 12, 2019 - 1:42am Permalink
For a long time I was just an observer. In the end I decided to register :)
loveawake.ru wrote on July 24, 2022 - 3:42pm Permalink
Welcome to the world of adult Dating loveawake.ru