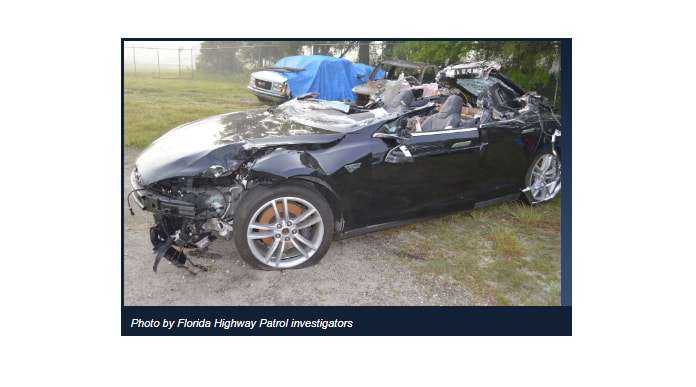 A safety review panel at the National Transportation Safety Board found that Tesla's Autopilot had a lack of safeguards contributing to a death while a Model S was on Autopilot.
Advertisement

The National Transportation Safety Board (NTSB) has named multiple causes for a deadly Tesla Model S crash that killed a driver in a crash one year ago. The board found errors on the part of both the driver of the truck and the Model S contributed to the crash. However, the NTSB report states that the Tesla Autopilot system also was a contributing factor.

NTSB's report says, "The NTSB also determined the operational design of the Tesla’s vehicle automation permitted the car driver’s overreliance on the automation, noting its design allowed prolonged disengagement from the driving task and enabled the driver to use it in ways inconsistent with manufacturer guidance and warnings."

NTSB's Chairman Robert Sumwalt III, was quoted in the report press summary by NTSB as saying, "System safeguards, that should have prevented the Tesla’s driver from using the car’s automation system on certain roadways, were lacking and the combined effects of human error and the lack of sufficient system safeguards resulted in a fatal collision that should not have happened.”

A preliminary report of the crash previously released clarified many misconceptions about the crash. For example, many assumed the truck had made a left turn across a divided highway illegally. As the NTSB images show, the truck was turning in a designated turn lane. The new report again stated that the Tesla being driven by Mr. Joshua Brown was speeding at the time of the accident with the speed set at 75 MPH in a 65 MPH zone and that Mr. Brown never braked before the impact with the side of the truck. The conditions were daylight and dry.

The report lists as one finding, "The Tesla’s automated vehicle control system was not designed to, and could not, identify the truck crossing the Tesla’s path or recognize the impending crash. Therefore, the system did not slow the car, the forward collision warning system did not provide an alert, and the automatic emergency braking did not activate." Another finding was that "Fatigue, highway design and mechanical system failures were not factors in the crash. There was no evidence indicating the truck driver was distracted by cell phone use. While evidence revealed the Tesla driver was not attentive to the driving task, investigators could not determine from available evidence the reason for his inattention."

Tesla has since changed its Autopilot system in multiple ways to help prevent such accidents from reoccurring.

Image courtesy of the Florida Highway Patrol and NTSB.