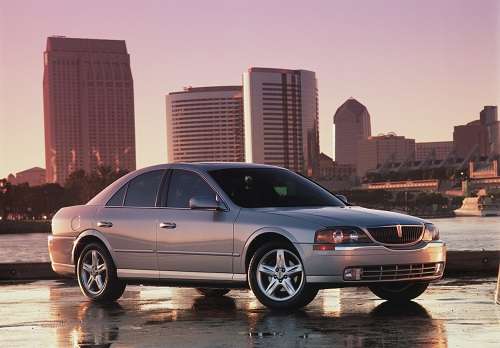 Lincoln is dead and Ford won’t change the vehicles, so it is now trying a name change. Here are two plans to save the company Ford won’t choose.
Advertisement

Lincoln will soon be killed off as a brand by Ford. In the year 2000, Ford Motor Company’s Lincoln division sold over 50,000 rear-drive, LS sport sedans, many with the V8 engine it could come with. In 2011 GM’s Cadillac division sold over 55,000 rear-drive CTS sport sedans, many with the optional V8 the car can come with. In 2011 Ford’s Lincoln brand had no rear-drive sports sedans to sell because it killed the model, and the platform off as part of ”The Way Forward” plan and instead sold about 10,000 MKS sedans. In 2011 Lincoln sold about 70,000 vehicles total - including its trucks and SUVs. This year sales are down 15% over that. How’s the Way Forward going for Lincoln?

Lincoln is about to launch a new mid-size luxury car that is not rear drive and will not have a V8. It will not sell well. Ford has fantastic mid-size sedans that are not rear-drive and are not offering any V6s. never mind V8s. They sell quite well, and in general Ford is really shining these days. It has been profitable every quarter since the crash of 2008 and is led by one of the best CEOs the industry has ever seen. None of that matters to a wealthy, primarily male, middle aged auto enthusiast looking for a signature automobile in which to drive to his practice, whether it be law, medical, or tennis. If that person wants a fuel efficient, practical, front drive sedan he will get one. But why would he think of Lincoln?

People who want a luxury car in the category that Lincoln is trying to survive in want raw power, refinement, style, and that special something that is often called cool. Lincolns are not cool anymore. They were. There was a time in this country, it was about 10 years ago, when Lincoln was looking pretty good. Successful professional men and women loved the Lincoln LS. It was “right-sized” it oozed refinement (for the time) and it had great punch (for the time), able to dash to 60 in the low six seconds. The expensive, double wishbone suspension and rear drive platform made it handle well. It had state of the art GPS and traction control. All was well. Then sales dropped as the platform aged and was not updated. In an effort to chase the luxury truck and SUV market Lincoln relied on gussied up Explorers and F-150s to keep the brand alive. Didn’t work.

Plan1 – Mustang to the Rescue
Ford can fix Lincoln by creating a 4-door Mustang with the level of refinement one finds in the Lexus GS350. It will also have to change or substitute the My Ford Touch and Synch system because buyers are reporting it as defective and low quality. That doesn’t mean it is, but if buyers think it is, and they report that to Consumer Reports, KBB, and J.D. Power and Associates, does it really matter? This fix would take Ford a minimum of three years. Can and should Ford fund the Lincoln brand’s many employees, and run more adverts that won’t sell front drive Fords with more luxo-sauce while losing heaps of cash? Why?

Plan 2 – Hyundai to the Rescue.
There is a great rear-drive mid/full size sedan for sale in the US with better quality that Lincoln has now, and that even seems to look a bit like the beloved LS. That car is called the Hyundai Genesis. Hyundai sells some Genesi and has the volume models to support it, but frankly, Hyundai set up its dealer network all wrong to lure that doctor from paragraph 2. The cars are fine, great even, and the people at Hyundai are also great. The problem is that Lexus has moved on. Visit a Lexus dealership and eat in the free café while your Lexus is washed for free some day and then drive over to Hyundai. It isn’t the same product category. Lincoln could private label the Hyundai Genesis V8 and restyle it to look like the LS. It could even rebadge it the LS. This would buy Lincoln time to work on a platform worthy of the name. If you think that people won’t buy the Genesis it is worth noting that Hyundai sold 30,000 of them last year. And it is slated to sell more this year. If you think this plan is rediculous because Lincoln buyers wouldn't buy a Hyundai, consider this quote from Lincoln's Jim Farley, executive vice president of Global Marketing, Sales and Service in a press release today; “The time is now for Lincoln. The ‘Great Recession’ changed people and their view of luxury. Today, luxury consumers make decisions based on what appeals most to their passions and not what they believe will impress others. We know we need to continually surprise and delight these new clients.”

Lincoln’s days have been numbered since it moved from a rear-drive platform. It has two options to survive. By the way, Lincoln’s new name is “The Lincoln Motor Company.” Maybe that will do the trick?

Aaron Turpen wrote on December 3, 2012 - 10:42pm Permalink
My dad saved his whole life to finally buy a Lincoln Town Car in the mid-1990s. He'd always wanted one and believed that once he got one, he'd finally have "made it." Turned out to be the biggest pile of crap ever produced. I swear that car was built on a Tuesday after a long weekend and a day before a general UAW strike. Horrible car. And for those who don't believe a re-badged foreign car with the Ford name on it won't sell well. Remember that Ford actually invented the captive-import idea back in the late 40s. As recently as the late 1990s, the Ford Aspire was an imported Kia Avella. One thing that luxury brands have little to worry about is absorbing the import duties, which is the biggest roadblock to rebadging. Hyundai, however, is unlikely to pen an exclusivity deal with Ford unless they can make Lincoln their own luxury brand as the company seems pretty obviously aiming towards creating one. They'd argued over it in 2008 with the re-design of the Genesis and decided to hold off until the market improved. So any time now..