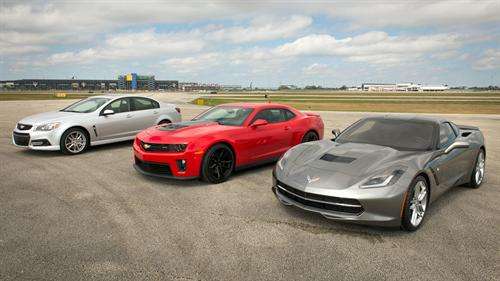 Chevy will roll out an unbeatable power trio of 2014 Corvette Stingray, Camaro, and SS at the New York Auto Show

Chevrolet will put its dominance on display in New York. Rear drive, V8, affordability is back in America.
Advertisement

The 2014 Corvette Stingray would have been news enough, but at the New York Auto Show Chevrolet is rolling out an armada of powerful performance cars all of which are in range of many American buyers. Augmenting the Corvette Stingray is the all-new Chevrolet SS, and a 2014 Camaro refreshed and ready for its final push for sales prior to updating.

2014 Corvette Stingray
The 2014 Corvette Stingray coupe is still so fresh we should slap it, but yet, Chevy isn’t stopping the juggernaut. Right behind the aluminum and carbon fiber Coupe we now have the awesome Corvette Stingray Convertible with its cool to operate new top. The top can be remotely operated with the key fob and can also be lowered at speeds up to 30 mph. Our own Patrick Rall, a Detroiter and insider in the domestic power car scene, predicts that the next ‘Vette to appear will be the 2014 Base Corvette Coupe. Fans will likely have to wait until later this year for news on a more powerful and higher specification level Corvette supercar.

2014 Chevrolet SS Sports Sedan
Rear drive, with V8 power and four doors, the new Chevy SS imported from Australia, is the working man’s escape from a humdrum commute. Able to stash two or three kids and possibly a spouse, the SS will bring old-school power and handling to the family man. Chevy now joins only Dodge in offering a four door, rear drive performance sedan that is priced for sale to middle class Americans. In fact, these two are the only ones on the planet with that combination, with the possible exception of Hyundai’s Genesis Sedan. Ford has no offering and Toyota’s IS-F, which was priced higher than the category anyway, is going away after the remaining inventory is finally bought. After the dust settles and Chevy has sold a few thousand, look for the announcement of the SS with the Chevy 3.6 liter V6. That will be an excellent family car for sporty drivers on a budget.

2014 Chevrolet Camaro
The Camaro has been the dominant pony-car for many consecutive sales months and years. It has configurations starting with over 300 hp near $30K, and also has a version that can likely spank a 2013 base Corvette on a track. Chevy even builds a sub-9 second quarter mile drag racer for its fans called the COPO Camaro. In between there are at least two other popular V8 versions for track and street use. The Camaro has become a full line of rear-drive, powerful cars that only Ford and Dodge can come close to competing with. Again, only Hyundai with its rear-drive, powerful Genesis Coupe is really even trying. The changes this calendar year are mostly cosmetic. The Camaro is approaching the limits of its design life and it will not be long before a new design is leaked (like Ford has done with the new Mustang.) At some point in the not so distant future there will be that sweet spot where the new Camaros are coming and the old ones are still on the lot. That my friends, will be the best time to buy your dream car and take it home for a song. Look for the upcoming announcement of the "Camaro Z28" and you will know it is time to make your move.

Chevrolet can thank the Volt, Spark, Malibu Eco, and Cruze for making all this possible. However it came to be, this is possibly the swan-song for American power in the US.