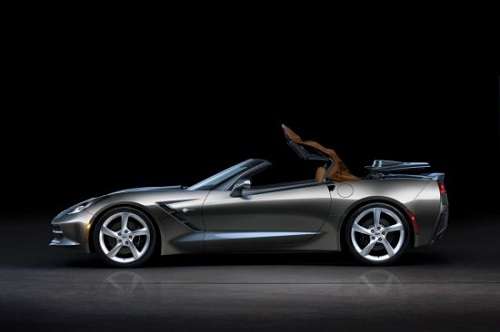 2014 Corvette Stingray Convertible revealed to have a surprise top

The new 2014 Corvette Stingray Convertible is revealed by GM at the Geneva auto show and it has a top design we didn't see coming.
Advertisement

The all-new 2014 Corvette Stingray Convertible has been unveiled at the Geneva auto show. Chevy has been keeping the top details secret from the media and fans, but it has now revealed the top and it comes with a twist. The new Corvette Stingray’s top is now power actuated and can be remotely operated.

The new 2014 Corvette Stingray Convertible top design also comes with a quandary. Which is the most cool way to drop your ‘Vette’s top when exiting a restaurant? The first way would be to exit, see your car parked nearby by the valet, who is showing it off to other patrons and be sure your date sees it too. Then without removing your hand from your jacket pocket press the key fob that drops the top remotely. The Corvette will be ready for entry as you approach. In our second scenario, one would simply walk to the car and enter, but then while driving away, hit the top button to drop the top while accelerating away. The new electronic top can be operated at speeds up to 30 mph. We will add this cool roof to the Corvette's other 5 shocking features.

Convertibles have always been the coolest corvettes - aside from the 1963 split window coupe. Ed Welburn, GM vice president of global design commented saying “The convertible has been a part of the heart and soul of Corvette since the very beginning in 1953. With the all-new Corvette Stingray, we designed and developed the coupe and convertible simultaneously. As a result, the Corvette Stingray offers an open-top driving experience with no compromise in performance, technology or design.”

The 2014 Corvette Stingray Convertible also has some design elements that cannot go unmentioned. There is a lifting and sliding hard composite tonneau cover that moves aside to allow the top to go up or down. This is a classy element. Convertibles with visible inner workings are low-rent looks. The cover may also be an aerodynamic necessity for a car that can travel at nearly 200 mph. Behind the seats there is also a black composite accent panel that will aid both looks and wind management. Viewed from above thee is a definite Batmobile styling that really looks special. The seats have nacelles behind them on the hard tonneau cover that set off the design in a Mark 5 sort of way. Between the nacelles the body color is drawn down into the interior between the seats.

Top up, the occupants inside the 2014 Corvette Stingray Convertible will benefit from a new 3-ply soft cover. The materials are thick and include sound insulation and of course a glass rear window. These premium convertible specifications are in keeping with the 2014 Corvette Stingray’s new upscale interior. Tadge Juechter, Corvette chief engineer said in a press release today “We wanted the driving experience of the Corvette to live up to the performance expectations that come with the ‘Stingray’ name. Because it was designed from the beginning as an open-top car, the Corvette Stingray delivers an exhilarating, connected driving experience – no matter what configuration you choose.”

All 2014 Corvettes will have the same world-class mechanicals. The Corvette will have the same “LT1” pushrod, V8, direct injected powerlplant as hard top ‘Vettes. It will also have the all-aluminum space frame design. Steel is out for 2014. Carbon fiber is in, and in a big way. The entire hood and other parts of the car are made from this exotic, lightweight material. Without any unnecessary teasing, Chevrolet revealed that indeed the Z51 performance package can (and will) be applied to the new 2014 Corvette Stingray Convertible. The main addition of this package is a limited slip differential, but there are other benefits as well.

It may have leaked out before now, but this press release also confirmed that there will be left-hand-drive 2014 Corvette Stingray Convertibles for other markets. In other words, there will not be a 2014 Corvette Stingray with the wheel driver’s controls moved to the “wrong” side of the car for markets where that is the custom. In April’s Motor Trend MT Confidential section, Mike Connor reported that in reply to Australian auto reporter's question about right-hand-drive Corvettes for export, GM's Tim Lee said “You can write what you want to write – I really don’t give a S*&T. But it is not in the mainstream plan.” Testy, Testy. GM wants the Corvette Stingray to be its ambassador to the many countries in which GM does not do well against Porsches and other sports cars. Susan Docherty, president and managing director of Chevrolet and Cadillac Europe made the point saying “It's fitting to introduce the new Stingray convertible on the global stage at Geneva, because Corvette is the face of Chevrolet the world over. It is an icon that has long been recognized and admired even in countries where it’s never officially been offered.”